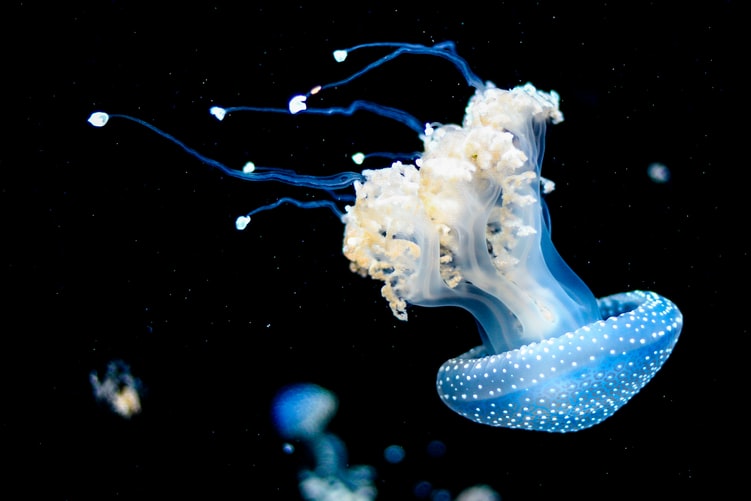 If you take a trip to Koh Rong, the second largest island in Cambodia, and wait until nightfall you will see a natural spectacle that has dazzled and puzzled visitors for many years. If you were to arrive during the day the beach would look like any other beach with pale sand and beautifully clear water. At night however, it is transformed into an incredible scene of waves that glow and water that shimmers as you swim.

Contrary to popular belief, this is not magic but in fact a type of plankton that uses a process called bioluminescence to produce light. The more well-known examples of bioluminescent creatures are fireflies and glow worms, but these more commonly recognised species are actually very unique. There are only a few land-dwelling animals that can use bioluminescence. Approximately eighty percent of all bioluminescent organisms are found in the sea.

In the open ocean there is no light 1000m below the surface and so being able to produce your own can have many advantages. It can help to find prey, find a mate and avoid predators. Bioluminescence can act as a torch to hunt with or function as a glowing lure that captivates the prey and entices them to within striking distance. A famous example of this is the deep-sea anglerfish, familiar to many from the movie Finding Nemo, that has a glowing barbel sticking out of its forehead and it uses this to lure prey towards its mouth.

Bioluminescence is not only good for attracting prey but is also fantastic for seducing mates. In the pitch-black waters of the deep, it can be quite hard to find a partner and male anglerfish rely on the females’ bioluminescence to find them and successfully reproduce.

And finally, whilst it may seem odd to use light as defence, strong flashes of bioluminescence can be used to scare off approaching predators. Alternatively, it can confuse predators, so they miss their target. Some squid can even detach bioluminescent arms which stick to and distract their predators. This then has the added advantage of making the predator more conspicuous, attracting secondary predators.

Bioluminescence can act as a torch to hunt with or function as a glowing lure that captivates the prey and entices them to within striking distance.

A personal favourite is the vampire squid which has a particularly interesting way of protecting itself. It is a fascinating species that has remained largely unchanged for over 3 million years. It lives over a kilometre below the surface and therefore exists in almost total darkness. It is a voracious predator and hunts a huge variety of prey. However, if a vampire squid is in danger, they do not have ink sacs like other squids. In such dark water that would be pretty much useless. Instead, when frightened, they fire a cloud of bioluminescent mucus at their attackers, confusing them for long enough to allow the vampire squid to escape unharmed.

Not only this, but the vampire squid is also covered with light-producing organs called photophores. Many species have these, but what is remarkable about the vampire squid is the control that it has over these organs. It can alter the duration and the intensity of the light, essentially allowing them to turn themselves ‘on’ and ‘off’ like Christmas lights. They can, therefore, make fabulously complicated patterns to disorient their predators and attract their prey.

Once these behaviours were observed by scientists, a very important question arose. How do they do it? Bioluminescence usually comes from energy being released during a chemical reaction. This reaction is between two molecules known as luciferase (which is an enzyme) and luciferin. The product that is made is so high in energy that it releases a photon and we see this as light. This reaction is either done by the organism itself, or by symbiotic bacteria that live in or on it. The animal provides a safe home and food for the bacteria, and in return the bacteria produce light – everybody wins.

It can alter the duration and the intensity of the light, essentially allowing them to turn themselves ‘on’ and ‘off’ like Christmas lights.

But there is another very important question here and that is how did bioluminescence evolve? How can an organism suddenly go from not being able to glow to being able to? One theory comes from the fact that luciferins, these light-producing molecules, are all good antioxidants. Antioxidants are molecules that neutralize unstable molecules, known as free radicals, that can damage cells. One of the main causes of these free radicals comes from rays of UV light. So, perhaps these molecules were originally used as antioxidants, but as species moved into deeper water to avoid their predators, there was much less light around. Less light meant less UV radiation, which meant fewer free radicals and thus a reduced need for antioxidants. Therefore, in the dark, being able to use luciferin as a producer of light was far more useful than using it as an antioxidant.

Whilst this is one theory, there is still a lot of uncertainty as to how bioluminescence evolved in many organisms. It is estimated to have evolved independently at least 40 times! But what is perhaps even more remarkable is that bioluminescence also seems to have evolved multiple times within individual species. This is can be seen again in the deep-sea anglerfish which has two different light-emitting systems. There is the bacterial luminescence in its lure and another, less understood, form of chemistry that takes place in its chin barbel.

So, there is still a lot to learn about these extraordinary creatures and how it is that they came to be. But, while scientists continue to have many unanswered questions, the beaches of Koh Rong remain some of the finest light shows on earth.