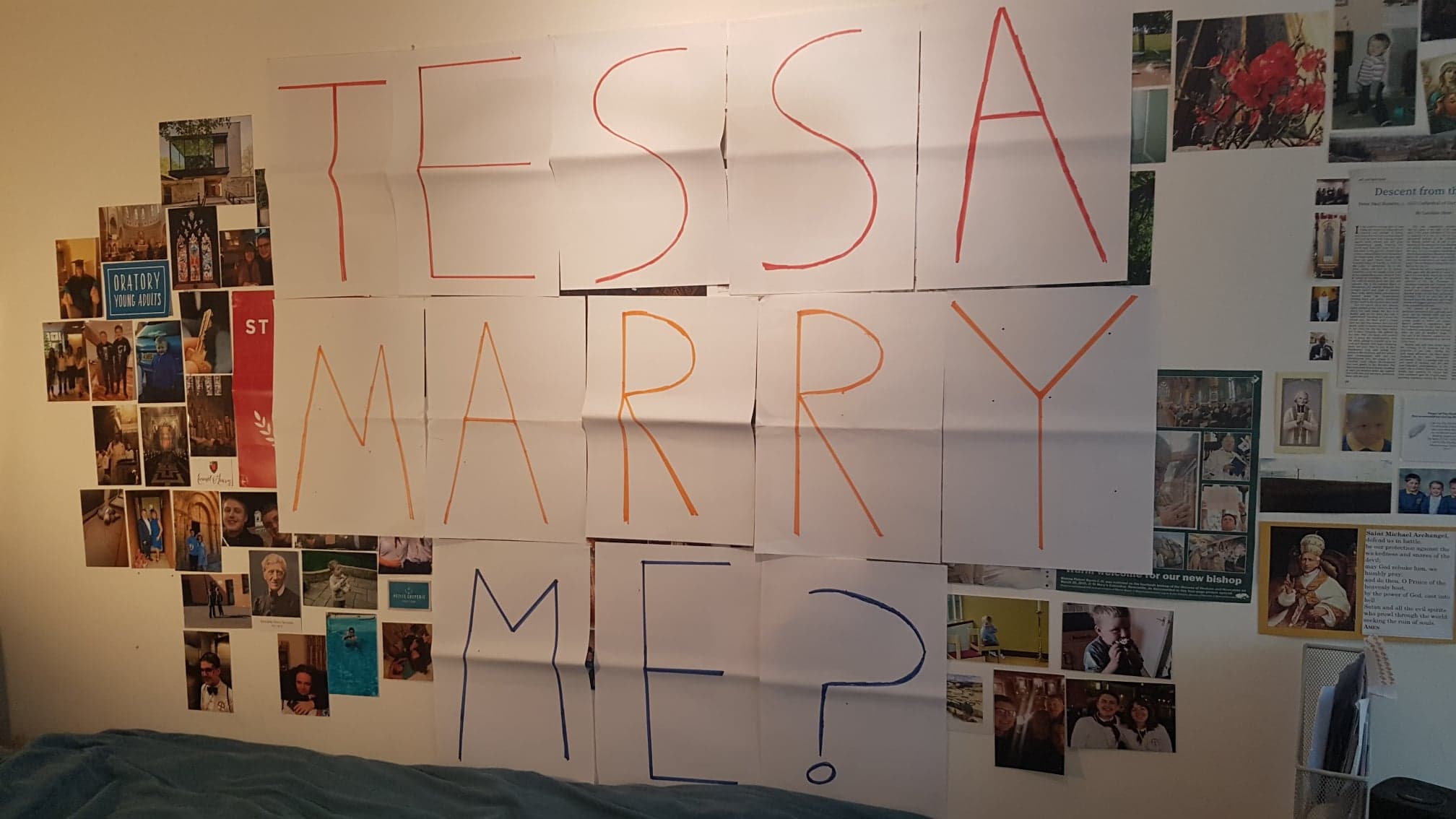 Image Description: several A4 pages stuck on the wall read “Tessa Marry Me?”

It’s not an easy time. Every email and conversation starts with “I hope you’re safe and well”, “…in spite of these difficult circumstances”, “strange times”, or, my personal favourite, “a warm virtual welcome”. It feels almost weird not to talk about it—and it would be wrong to gloss over the fact that it truly isn’t an easy time.

But I for one have begun to get a little bored of being bombarded solely by content about coronavirus, and its negative effects. They have their place, and it’s so important to recognise what is going on and how people have been negatively affected—but it would also be nice to get some positive news.

Yes, there are many fantastic online sites which spread optimistic and happy news—but we’re not hearing happy news about Oxford. We’re hearing about the term we lost, the negative impacts of exams during lockdown, and the complete devastation lockdown has had on many aspects of our work and welfare.

These are all valid—but we need a little bit of positive news too—about the goings-on of Oxford, its colleges, and its JCRs and MCRs. It’s for this reason that the OxStu Features team will be bringing you positive news from around Oxford once a week, every week for this term.

Plenty of good has happened this week, from College JCR film nights to Oxford-wide policy change.

Indeed, the JCRs of Oxford got off to a running start as they organised Strava clubs for JCRs to see which college would run the farthest each week, with several colleges getting involved in the healthy (!) competition. With this friendly competition established, it’s time to put that one government-sanctioned run of the day to rack up some miles.

Most JCRs have of course moved online, creating virtual communities. Somerville has a FB group called Ville Virtualfare hosting plenty of fun activities—and even more pictures of students’ pets! Jesus College JCR has been running virtual welfare teas and has even started a Book Club focusing on women authors which is accessible to all members of the JCR.

At LMH, a 500-strong page has been established for students and staff alike (“LMH together”) which shares info about and photos of the college, and updates from the porters. They even made a college-wide lip sync video starring both students and staff!

At New College, this virtual community has even starred their porter: described by outgoing New College JCR President Josh Atwell as “a bit of a gym lad”, their night porter hosts a workout twice a week over Microsoft Teams for the community to gain from—and build their gains.

John’s have even formed a Discord server to discuss a variety of topics, and have made a mosaic tile of students’ faces superimposed on college buildings to recreate that close college environment.

And it’s not just the community that’s moved online—but challenges too. LMH, Worcester, Somerville and others have been uploading daily challenges—with Worcester pidging prizes including chocolates to be collected once they can return to college.

Although not quite the same as completing Worcester’s three challenges in person, these are certainly easier to complete.

Worcester JCR has also featured the maintenance of a Worcester Minecraft server and the introduction of a welfare premium subscription to Headspace—a move followed by some other colleges including Pembroke, whose JCR’s music and drama reps have even been running a virtual talent show.

Over at New College, their JCR lockdown challenges on FB have been showcasing talent in an array of tasks from making a TikTok to how to make a world a better place, while Hertford has introduced the “Hertford Heroes”. At John’s, marital life continues with freshers proposing to one another to continue the tradition of college families—one daring student even proposed virtually.

Many colleges have continued the pub quiz tradition online, with Somerville hosting one weekly and Catz offering an open-access charity pub quiz which has been particularly popular. Brasenose also ran a pub quiz which involved BNC trivia and is features on their Insta page. Pembroke is moving towards a college-wide pub quiz while Mansfield and John’s have kept students entertained with regular quizzes.

Virtual film nights are also a very common online retreat, with LMH, Jesus MCR and others running them often, while New College has introduced Netflix parties on Friday nights.

Word on the street has it that Wadham hosted a virtual bop on Zoom, showing that just because we’re all in lockdown, doesn’t mean the party has to stop. Hopefully, more colleges will follow in this tradition.

Oxford may be physically shut, but its welfare system continues to be up and running to help support its students. Jesus JCR has hosted regular virtual welfare teas, introduced an online yoga subscription which allowed students unlimited access to their provider’s yoga lessons for a week, and even introduced its “adopt-a-finalist” scheme to allow students to cheer up finalists during their exam period.

Somerville has also rolled out its adopt-a-finalist scheme, while LMH has moved forward with meditation and a few JCR Netflix accounts.

College chapel services also continue to go ahead, with Jesus College introducing “Evensong by Email” and other colleges following suit, including LMH.

Meanwhile, BNC ran a welfare arts competition, the results for which are on their Insta page—particular highlights include “Yeast for the stars!”, “Budding with optimism” and snails at nighttime.

Virtual term hasn’t stopped students’ and college pets from being the stars of the show, with pet sharing a particularly popular hobby—St. Hugh’s college cats are posted on the JCR page, often receiving a warm reception. Meanwhile, Lincoln and Brasenose, in a rare move, have teamed up to witness the birth of ducklings at Lincoln college to ducks famous at Brasenose, all featured on BNC’s JCR insta page.

New College is hosting a full (virtual) timetable of arts in 2nd week, culminating in the release of an online anthology—so look out for those activities! Merton, meanwhile, has launched a “really cool podcast” gaining traction outside of Merton, called Faces for Radio, which has already made three episodes accessible here.

Individually, we’ve all been cooking and baking up a storm to stave away our boredom and our hunger—and over at Pembroke JCR, their international rep is making videos of international students cooking local dishes which are being featured on their JCR’s Instagram. The same Insta features their JCR president, Peter Corti, who went live making lasagne along with viewers, having posted the recipe.

Speaking of Instagram, many college JCR accounts are particularly active, including St. John’s, which has launched a virtual tour of its eight (count them—eight!) quads and their history. It has also featured a fourth-year physicist, Marco, “who is one of the first 15 people to participate in the COVID vaccine trials at Oxford!

He’s just received his first dose of either the control or the trial vaccine, and is feeling fine. What a hero! Meanwhile, on Merton’s JCR access page, they’re celebrating 40 years of women studying at Oxford.

To the uninitiated amongst us, the one thing it seemed we’ve had to leave behind are the beautiful gardens and lawns of Oxford: but at Somerville, their gardener is doing Q&A sessions for the college community.

Now all you have to do is change your Zoom background, and you can be having tutorials on that beautiful college quad!

Alongside all of this, Brasenose, John’s and Lincoln have been doing tours of their beautifully sunny college quads during a period of sunbathing-on-the-quad withdrawal—all features on their JCR Instagram pages.

But it’s not just at the College level that we have good news. St. Johns has finally agreed to give full refunds to ticket holders of its now-cancelled ball, while RAG has launched their emergency fundraiser for Oxford’s annual charities—for which they’ve already raised almost £400.

Following on from the huge win involving Oxford’s divestment from fossil fuels, Oxford Climate Society is hosting a talk entitled “Changing Social Norms: Behaviour Change for Climate” which will be live-streamed on YouTube, as more students than ever are willing and capable of engaging with a discussion about how to achieve the change we need.

Oxford May Morning celebrations went ahead under lock-down, with Daily Info Oxford and Oxford City Council collaborating to run online celebrations including the famous Magdalen College Choir and many other activities.

Finally—and last but certainly not least—Oxford have reinstated finalists’ options to graduate in person rather than in absentia!

If you have any positive stories from Oxford, your College JCR or MCR, or anything relevant to your studies at Oxford, please email [email protected].