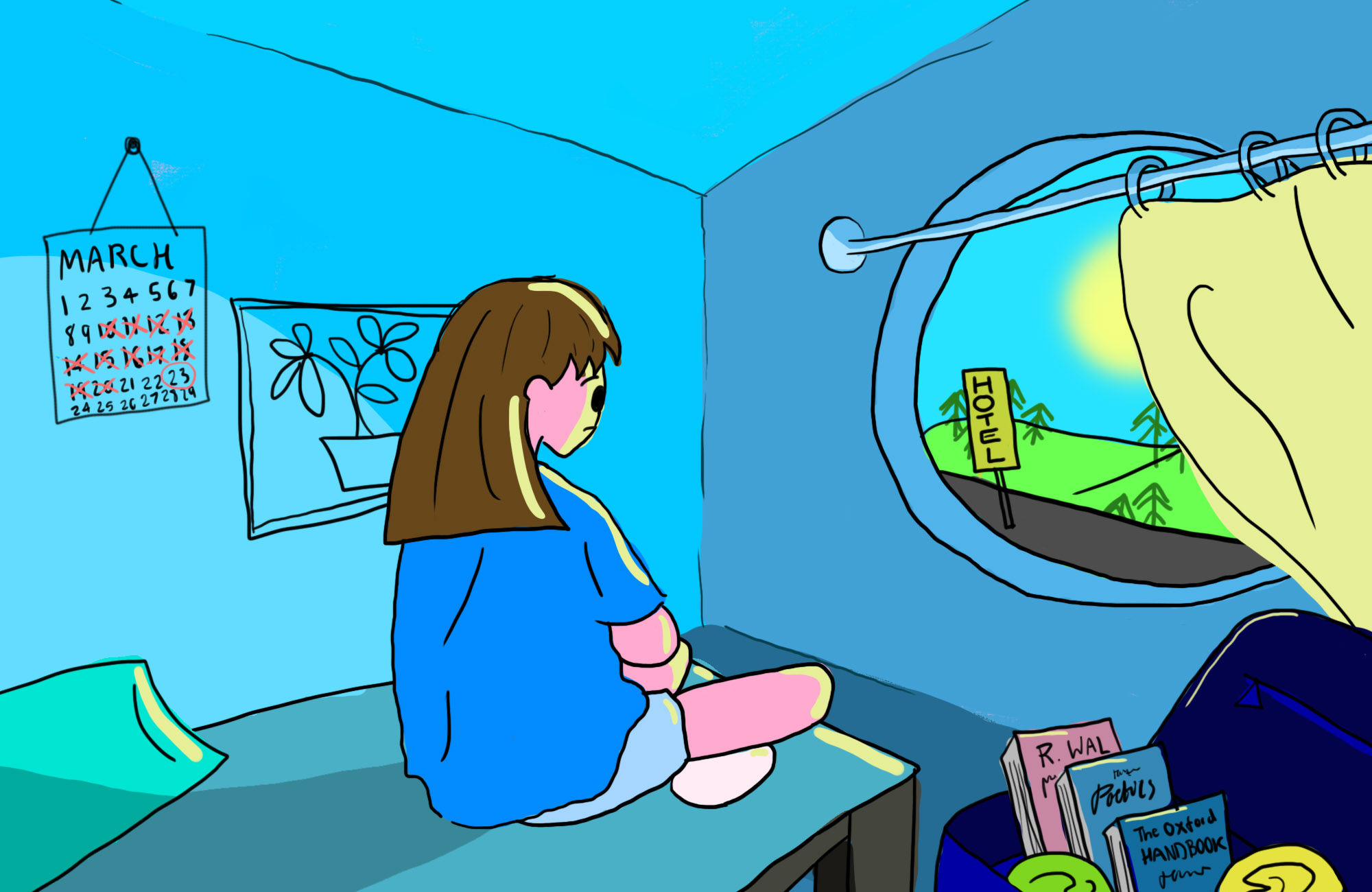 Grounded: An International in Hotel Quarantine

It was the end of 8th week Hilary: the last week of term. There is something inexplicable about the way that Oxford life – and the city itself – becomes a strange bubble during the term. Each of us gets sucked into a routine of sorts, moving from college to college, library to library, faculty to Tesco, as our minds are preoccupied by work, essays, sport, drama (of all sorts), internships, and so much more, and yet all related in some way to our lives in this very place.  The rest of the world and all its problems seem, for a moment, so distant from the meltdown we’re going through over a weekly essay due tomorrow morning that, within a week or two’s time, we will inevitably forget about. Maybe it’s a focus, or even a comfort, thing; our lives and our friends are all, for the time being, here. But every now and again, the reality outside slaps us in the face. Little would I know – or any of us for that matter – that this would’ve been the last week of Oxford normality that I would experience for a very long time.

It all started as whispers.

Apparently the situation is getting worse. It can’t be that bad, can it? Surely they won’t cancel Trinity. We’ll be allowed back next term, right? Four cases, then five, now six or seven, confirmed in the University. Bops and Entzes cancelled at the last minute.

As for many international students, I wasn’t anticipating to leave the country and go back home to Australia until late July or even August. Now suddenly, as every second more travel restrictions were being put in place, I was scrambling to try and arrange a flight home.

Then everything came crashing down with the email from the Pro-Vice-Chancellor on the 16th March in which we were told that “we anticipate that most or all teaching and assessment next term will take place remotely”: a line that still haunts me to this day.

Everything was unravelling by the minute, and I started to panic.

As for many international students, I wasn’t anticipating to leave the country and go back home to Australia until late July or even August. Now suddenly, as every second more travel restrictions were being put in place, I was scrambling to try and arrange a flight home.

Each day the price of flights began to soar. Two sets of my flights were cancelled.

In my last day at Oxford, I woke up to the news that, from the day of my landing, all returning Australians were to be placed in state-enforced, hotel quarantine for fourteen days.

When I finally got on a plane, despite feeling exhausted, there was something exhilarating about it. The Boeing 777 that usually sits over 450 passengers was filled with about 40 of us after Australia’s travel ban only allowed for citizen repatriation, meaning I got a taste of what it might be like on a private jet or business class with an entire row to myself. All meal services were replaced by two personally delivered plastic bags with a sandwich, cookie, and water. And the stopover in Singapore forced us to remain on the plane during refuelling and cleaning: a bizarre and yet interesting insight into the behind-the-scenes of the aviation world as we wondered if this plane was even going to be allowed to leave the country.

And yet, even after 25 hours strapped in, the landing was laughably anti-climactic, the sense of relief only half-hearted, despite everything that had happened.

This was because, in my last day at Oxford, I woke up to the news that, from the day of my landing, all returning Australians were to be placed in state-enforced, hotel quarantine for fourteen days.

After my nose cavities were rather violated by the Covid-19 test, we were escorted by a legend of a paramedic who did everything in his power to keep our spirits up by asking, “Should I do a donut? A few cheeky burn-outs?”, as we were driven across an empty tarmac and to our hotel.

And in the end, my stay wasn’t too bad at all. I got into a routine of sorts, reading in the morning, forcing my boyfriend into virtual yoga for an hour each day at midday

On arrival, I was escorted by a nurse, who was visibly still trying his best to figure out what exactly was going on, to my room which I would be forced to remain in for two weeks.

Being completely honest, it wasn’t the nicest place; the long, bare concrete walls reminded me of an underground carpark, the area fitted for a queen-sized bed was replaced by a tiny, single hospital bed with plenty of void space (that I found out later would come in handy for miniature laps around the room), two narrow windows that opened up by about 10 cm, and, worst of all, my boyfriend was in the adjacent room, not with me. But the nursing staff, who checked on our welfare twice a day and delivered our (although questionable) frozen food made the place feel comfortable.

And in the end, my stay wasn’t too bad at all. I got into a routine of sorts, reading in the morning, forcing my boyfriend into virtual yoga for an hour each day at midday (even though he was definitely more reluctant on some days than others), calling a friend or family member when I could, watching my Mum and Dad outside my window as they delivered some home cooked food to the police officers, and trying to find joy in the smallest things: from watching the police officers accidentally drop two carts of sandwiches outside, to admiring my boyfriend’s house model made out of our breakfast boxes.

What shocked me most over the two weeks were the comments made by Lara Worthington – wife of actor Sam Worthington – whose mother was staying at the same hotel when I was. In her tweet, she called her mother’s treatment as “unacceptable”, as her mother condemned, via Instagram, this “godforsaken hotel”. Media outlets hit back immediately, calling out the comments that were undeniably elitist and entitled.

However, what such comments overshadow most are the sacrifices that the nurses and medical staff – at this hotel and across the globe – are making to ensure the safety and protection of humanity.

The very individuals who, for the sake everyone staying at the hotel, were putting on the most positive and friendly attitude despite how hard and long they were working on the front lines. We weren’t being ‘imprisoned’ against our will by some oppressive political regime; we were doing what was and still is needed to be done to fight this pandemic that has shaken the world – all the way to Oxford – in order to hopefully save more lives from devastation. It is absolutely heartbreaking seeing this kind of selfishness and entitlement play out, not just in this example with Lara Worthington, but in places around the world, notably in the USA in which thousands from dozens of states are taking to the streets, ignoring lockdown rules, to protest against coronavirus measures and their ‘civil liberties’.

Such responses selfishly ignore the way that – because of the nature of the spread of such a disease – there is a global, social obligation for every single individual to take responsibility and do their part in stopping the pandemic that has led to over 200,000 deaths. Otherwise, it will only lead to the deaths of hundreds of thousands more. It is the small sacrifices all of us around the world have to make – be that enduring quarantine alone in a single room, in our homes, away from friends, work, university, college – in order to fight this pandemic alongside the frontline workers. In order to, as we must keep reminding ourselves, eventually return to normality, and to Oxford once again.