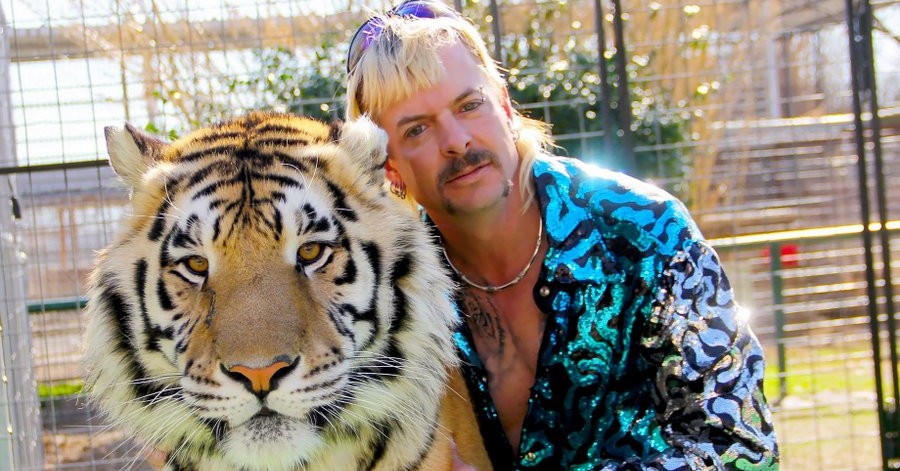 Image description: Joe Exotic crouching next to a tiger

Netflix’s Tiger King: Murder, Mayhem and Madness has taken the world by storm. A missing husband, a sex cult, a murder attempt and hundreds of captive jungle cats have made for incredible, if completely bizarre, entertainment under lockdown. The ‘Tiger King’ himself, Joseph Maldonado-Passage – more commonly known as Joe Exotic – has since become a household name. A self-proclaimed “redneck, gun toting, mullet-sporting, tiger-tackling gay polygamist”, Joe Exotic is certainly one of the most colourful characters to have graced our television screens this year.

One of the many, many things which sets Joe apart from other reality TV icons – the Kardashians and Gemma Collinses of the world – is his unashamed queerness. The series sees him speak candidly about his experiences of facing rejection from his family, the suicide attempt that followed, losing a partner to complications from HIV and finding love again with not one, but at least three other men. At the funeral of his husband Travis, we hear Joe boast about their sex life in graphic detail – with his grieving mother in law right only a few feet away.

Long before many of us knew of the likes of Pete Buttigieg, Joe threw his hat into the US presidential race all the way back in 2016 – if successful, he could have become the first openly gay president, a fact he constantly emphasised in his campaign videos. Needless to say, his openness about his sexuality couldn’t be more obvious. Some would say among countless depictions of young, white, effeminate gay men, the depiction of middle-aged eccentric amounts to a breath of fresh air.

However, the extent to which Joe’s presence in our lives counts as positive queer representation is questionable. I will admit that I was shocked to hear that he met each of his recent husbands when they were still in their late teens and Joe was several decades their senior. At least two of these husbands – John Finlay and Travis Maldonado – identified as heterosexual, made explicitly clear in the documentary. Even more unsettling is the implication that Joe lured both Finlay and Maldonado into such a relationship using drugs, with both men describing how they felt trapped – both within Joe’s wildlife park, and within their marriage.

The LGBTQ+ community deserves much better representation than a misogynistic narcissist

Alongside what can only be described as grooming, I found the misogyny which underpins Joe’s harassment of “that bitch Carole Baskin” deeply disturbing. The attacks made against Baskin were obviously gendered, with a smear campaign consisting largely of sexualised memes (“Smile everyone, you could have a crotch like Carole does”, accompanied by a photo of a blobfish) and culminating in a murder attempt which saw Joe sentenced to twenty-two years in prison last year.

Strangely enough, fans of the series have rallied around Joe to hero-worship him and construe Baskin as the villain of the piece. Since watching the series, I have struggled to understand how this seems to be what many viewers have taken away from it – director and producer Eric Goode reminded us in an interview with Variety that “these people, let’s not make any mistake about it, were taking advantage of young, wayward kids – and their animals.”

While it is refreshing to see another unashamedly gay figure becoming such a prominent name in our lives, this is not enough to warrant the title of ‘queer icon’, and so I cannot bring myself to think of Joe Exotic as such. An icon, certainly – he’s the epitome of ‘larger than life’ – a thousand times larger at least. However, the LGBTQ+ community deserves much better representation than a misogynistic narcissist who makes no secret of the fact that he used drugs to entice barely legal men into marriage.

We’ve never seen anyone quite like him on screen before, but it is hugely important that we remind ourselves that he is neither a fictional character nor a ‘problematic fave’ the LGBTQ+ community can look up to, even ironically. Far too many viewers have idolised Joe, lauding him as a symbol of camp and excess, without realising that this is merely a veil that has been cast over his deplorable actions.