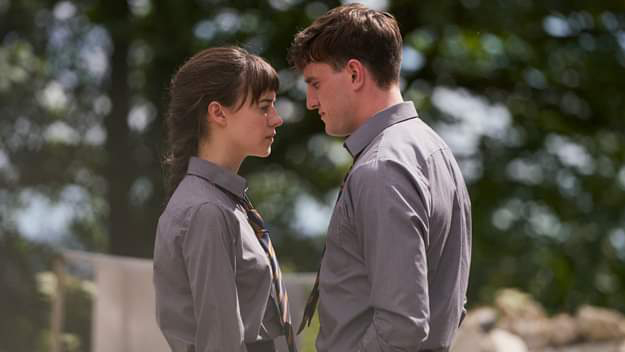 Image description: Marianne and Connell stand facing each other

“Is that really weird?”

“Yeah. Yeah, that’s really weird Marianne. But I think I understand it.”

That is the premise of the BBC’s 12 part adaptation of Sally Rooney’s acclaimed novel of the same title. The show unfolds the agony and ecstasy of first love before your eyes in short, sharp shocks of half an hour episodes that leave you gasping for air at the tense normalcy of it all. The drama follows the lives of Marianne and Connell as they traverse the harsh social divides of school and the messy reality of university life. Throughout all the disasters and heartbreaks, the one constant is Marianne and Connell’s emotional intimacy that is both touchingly realistic yet shockingly surprising to find on the screen in your own home.

The show unfolds the agony and ecstasy of first love before your eyes in short, sharp shocks of half an hour episodes that leaves you gasping for air at the tense normalcy of it all.

The lead actors, Daisy Edgar-Jones and Paul Mescal superbly portray the fears and awkwardness of passion and miscommunication that plague both characters throughout the drama. So much of their love and the complicated connection is depicted through silences and body language so that the truly intimate scenes seem voyeuristic and too private to witness, more so than the beautifully directed sex scenes. Whilst the acting is of excellent quality, it is the truthfulness and honesty of the storyline that awes you. You find yourself not simply empathising with the characters but realising you are them and they are you. They hold up a mirror to every adolescent and young adult experience you have had. The light-hearted playground ‘banter’ to the first kiss and uncomfortable penetrative sex, all the way to the misunderstandings and silly fights seem too close to home.

You find yourself not simply empathising with the characters but realising you are them and they are you. They hold up a mirror to every adolescent and young adult experience you have had

The supporting cast too offers nuanced performances with hidden pain and secrets from Marianne’s mother who is all stiffness and harsh coldness played by Aislín McGuckin, or Connell’s mother (Sarah Greene) who is a ray of sunshine in what seems an almost unremitting tale of tragedy. Connell’s schoolfriends too depict the foolish, insecure cruelty of adolescents in a way that will leave you shamefaced and squirming.

Not only does the series, directed by Lenny Abrahamson and Hettie Macdonald, offer a comment on young love and relationships but also on the obstacles that class and wealth can present. Marianne is upper middle class, living in a white mansion with a drive but in a loveless house, whereas Connell’s mum is the victim of disappointment and works as a cleaner for Marianne’s family but is utterly supportive and wholesome. It also notes the painful truth of university life. The loneliness and awkwardness, the shy characters and constant seeking of fulfilment only to be left disappointed and confused by the adult world.

Whether you are a die-hard fan of the books and cast a critical eye on the TV adaptation, or are seeking something to distract yourself from the worry and fear of our current situation, Normal People will leave you with an ache in your gut and a tear in your eye that last long after the final credits roll. It is a truly beautifully crafted window into adolescence, first love and the start of real life.