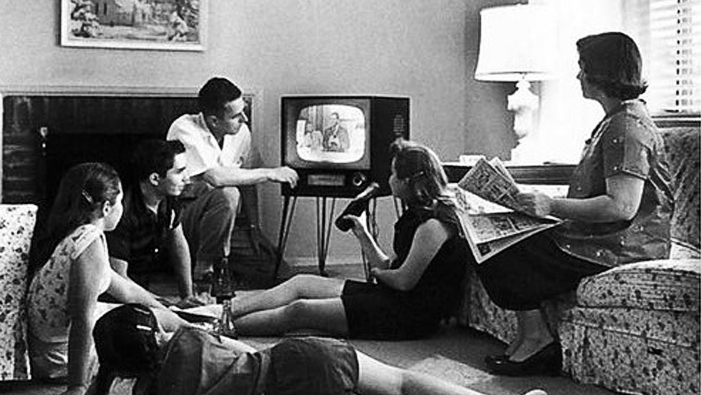 Image description: Family watching TV together in the 1950s

Are you still watching? Or are you catatonic, quilt-smothered and crisp-covered, one foot dangling over the end of the bed in refuge from the furnace-like heat of your duvet, and one eye bleakly registering the lockdown breadmaking psychodrama on your mum’s cat’s Instagram?

This is the reality of laptop television. One moment you’re settling in for the Masterchef final, the next you jolt awake at 3 am to Brendan from Coach Trip barking facts about Slovenian cuisine. According to Ofcom, viewing habits in the UK have predictably migrated towards this kind of consumption: aside from a handful of smash-hits like The Bodyguard and Love Island, most public service broadcasters have found their output increasingly consumed online.

The collective experience of gathering around a television at a certain time to watch a certain programme is gradually being replaced by solo viewing on laptops, tablets or phones; nearly half of UK households held on-demand subscriptions with services such as Netflix and Now TV in 2019. And while the biggest traditional televisual events have always been reserved for sports, royal weddings and the odd hotly-anticipated drama finale, these days coronavirus briefings inflect collective viewing with strange sobriety.

These changing habits might seem an afterthought at a time when social media is the columnist’s bogeyman of choice. But as programming becomes more convenient, more accessible and, well, more, we no longer subject ourselves to second – or even third – choices when ‘nothing’s on’.

Just as memories of three or four channels come quickly to baby boomers, my generation might consider how quickly things have changed over our lifetimes: a 2018 report by Childwise showed that children aged five to sixteen are unlikely to watch traditional television, using portable devices instead. As family TV watching quietly shrivels in the face of solo videos and glossy streaming services, what do we leave behind?

Under lockdown, every night I sadistically plonk myself in between my mum, dad and dogs (one of whom is both blind and extremely flatulent, a condition bearing predictable results) and scowl through Charlie’s Angels or Top Gear, favourites of my dad’s because he fancies bikini-clad crimebusters and Jeremy Clarkson in equal parts. It’s at these moments, while our final Trinity rumbles on remotely, that I’m reminded of the place communal telly can have in childhood.

It’s at these moments, while our final Trinity rumbles on remotely, that I’m reminded of the place communal telly can have in childhood.

In my family, which forever revolves around an evening diet of Emmerdale, Coronation Street and a drab infotainment dessert, TV is the bookend of the day. Being a twin, and the youngest of four, I was put in front of Noddy for four hours a day to give my mum a bit of respite.

I remember being deeply suspicious of primary school friends who weren’t allowed to watch telly and baulking at the message of Matilda, something we ironically watched all the time, implying that there was some exceptionality attached to children who preferred nineteenth-century novels to corny gameshows. Nowadays, as I increasingly physically resemble Mrs Wormwood, I’m optimistic that I’m no worse off for having vegetated in front of How Clean Is Your House every day after school. As I near the end of my English degree, I realise I’d still rather watch Kim Woodburn squirm at some dog poo on a carpet than read Moby Dick.

Mindless telly is a rite of passage, and the communal viewing experience of being subjected to it as a family is character-building. One incident to this effect sticks in my mind. At fourteen, I fell off my bike down a hill in Rutland, and my mum, following behind, ran me over on hers. Apart from being deeply winded and with track-marks across my middle, I survived – unfortunately, my mum broke her arm. Or, I broke her arm, as she insisted.

Mindless telly is a rite of passage, and the communal viewing experience of being subjected to it as a family is character-building

We ended up sitting in A&E for five hours, not speaking. Furious at having suffered the indignity of becoming both a temporary speed-bump and a weapon of perceived sabotage, I sat and blinked in front of Bargain Hunt for a long, long time. We both did, and the rage subsided. Nothing less than the radioactive glow of David Dickinson could have mended the rift between us – then, as now, television was a mediating third-party, a reason to put everything else aside to sit, and watch, together.

For many of us, some of the most memorable (and terrible) teenaged moments were when television shattered the wilful ignorance of sex on both sides of the parent-child divide; in my case, this came in the form of The Graduate, aged thirteen. When Dustin Hoffman takes his surly seat at a strip club, a dancer with the most outrageous boobs performs an impressive – and protracted – gravitational feat directly to his – and our – red faces; I have never been glared at so intensely as by those nipple tassels.

We’ve all repressed a dossier-worth of comparable memories, when we’d wait for someone to call a ceasefire and mutter ‘oh for god’s sake’, awkwardly fast-forwarding the scene, which would, tragicomically, appear as a handful of explicit flashing images. These early experiences are where tolerances, and boundaries, are formed and tested.

My twin and I were, at seven years old, banished upstairs every time Chaz called someone a ‘cow’ on Emmerdale. Believing it to be a swear-word of utmost toxicity, we bandied it around the playground and gave it large like the Kray twins. But daytime bravado belied night-time cowardice; when I would sheepishly knock on my parent’s bedroom door after suffering repeated nightmares about Jaws, I remembered too late that the only thing worse than a mechanical shark is the indignity of being sandwiched in bed between your disgruntled parents, who were probably thinking that seventeen is just too old for that sort of thing.

As uncomfortable as family viewing can be, I find myself missing it when hungover, I gloomily gorge on Come Dine with Me, face encrusted with McMuffin juice. I look forward to a time when I’m the one forcing my children to watch with me – although I might give The Graduate a miss.