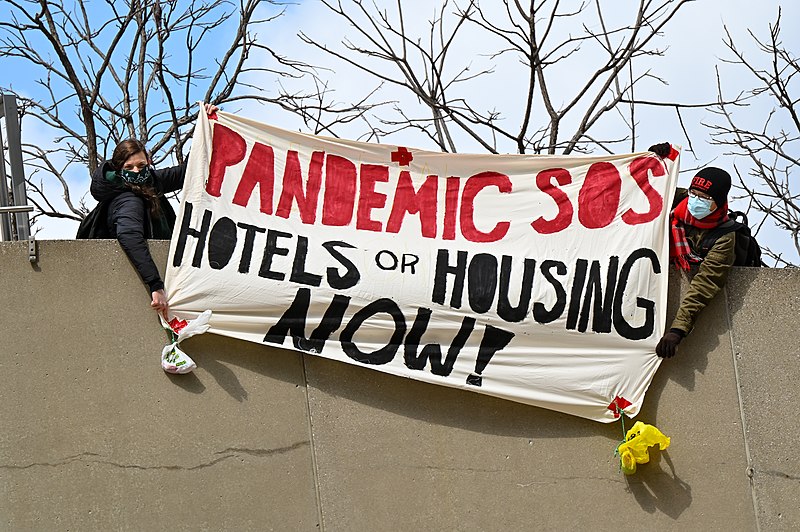 The right to protest is a fundamental right which should not be stopped if one does not infringe upon the law. This principle should apply in all circumstances, including that regarding coronavirus.  Europe, and the UK in particular, have taken a massive toll from the Covid-19 emergency, and the government has committed many mistakes in its tackling of the problem, especially doing too little at the beginning of the crisis. The fact that the lockdown measures were important in the saving of lives is indisputable, and it was the right decision to make in order to control the virus. The lockdown was essentially in making people see the gravity of the problem, yet many still refuse to acknowledge it. That is partially understandable, as I too, like most people, failed to understand the scale of the emergency until it affected members of my family. Yet one must also consider why people are protesting the lockdown, and comprehend that the way lockdowns were imposed by some governments has proven to be somewhat controversial.

I too, like most people, failed to understand the scale of the emergency until it affected members of my family.

The lockdowns were necessary, in the start. However entire populations cannot stay at home forever. The coronavirus crisis has exposed deep divisions within our society with the usual elitism of an entire intellectual social strata criticising anyone who protests the lockdown measures. I have seen headlines such as ‘Choose lives over the economy’, or ‘money isn’t the problem now’. The reality, however dire it may be, is that the problem is much greater, as the conflict between the economy and the health of the population in the face of Covid-19 is a false dichotomy. The economy is, for all intents and purposes, made up by the people, and it’s the driving force which fuels services, employment, pensions, welfare, and importantly healthcare. In most nations healthcare cuts have damaged the quality of that public service, and closing the economy for a prolonged lockdown will only intensify it.

The conflict between the economy and the health of the population in the face of covid-19 is a false dichotomy.

Further, it is ironic that the people loudly crying out against reopening are those with a secure source of income. The harsh reality is that in many areas, if companies, small businesses, and firms do not reopen soon, they simply will never reopen, as debts, taxes, and other expenses will become a mountain of burdens. The result of this will only be more divisions between the already feeble small businesses, and the large multinational corporations. It is for this that we should be worried about the prolonging of lockdowns, and why one must understand the protests, for people’s incomes, jobs, and quality of life are at risk – a problem far greater than Coronavirus. Covid-19 will eventually end, yet the repercussions of a prolonged lockdown, with many countries seeing growth predictions of more than negative ten percent, will be profound and long-lasting. People are scared, and rightfully so, for that percentage is not just a statistic, but real jobs and employment. This has already sparked widespread protests, for example in Germany and Italy, with people protesting how a further lockdown actually means that more and more people will be put into poverty and will struggle to make ends meet. Importantly, these are not the exaggerated, and at times hysterical protests seen recently in the United States over the alleged infringement of civil liberties, which gun lobbies have somehow shamefully turned into a defence of the right to bear arms. Instead, they are the protests by the people whose lives are most at risk from a lengthened economic recession, angered by the patronising attitude of an intellectual caste which persists in its belief that the economy can simply be halted without any harm.

There is no tradeoff between opening the economy and saving lives, because the shutting of an entire economy for an extended period of time will have the same effects, if not worse.

The decision to go into lockdown was necessary and justified, but must now slowly be rolled back, with a graduated and scaled reopening with some strict measures of social distancing to ensure the health of workers. There is no tradeoff between opening the economy and saving lives because the shutting of an entire economy for an extended period of time will have the same effects, if not worse. Crucially, many countries with competent administrations have understood that this division is a false dichotomy. Countries like Germany, Switzerland, and the Netherlands, have successfully kept most industries open, whilst also containing the virus – arguably much better than other countries in full lockdown. Many countries have also perhaps gone too far in their approach. Many nations, like the UK, are launching government apps to allegedly control the spread, something which the UK parliamentary committee on human rights has called ‘open to misuse”. In Italy, the lockdown was imposed by the Prime Minister, not by law, but by an administrative act – the Decree of the Presidency of the Council of Ministers – which did not need to get any approval from the President of the Republic, or parliament. Likewise, many countries have begun policing with drones, helicopters, and other manners which are reminiscent of the effective, yet dictatorial, Chinese solution to Covid-19. It is for this reason that we should understand that lockdown cannot be perpetual and that people are protesting because they’re afraid of being deprived of their fundamental right to be able to work and to provide for their families. No one should protest the sensible idea of social distancing or even the temporary lockdown measures, but the abuses perpetrated in its name.