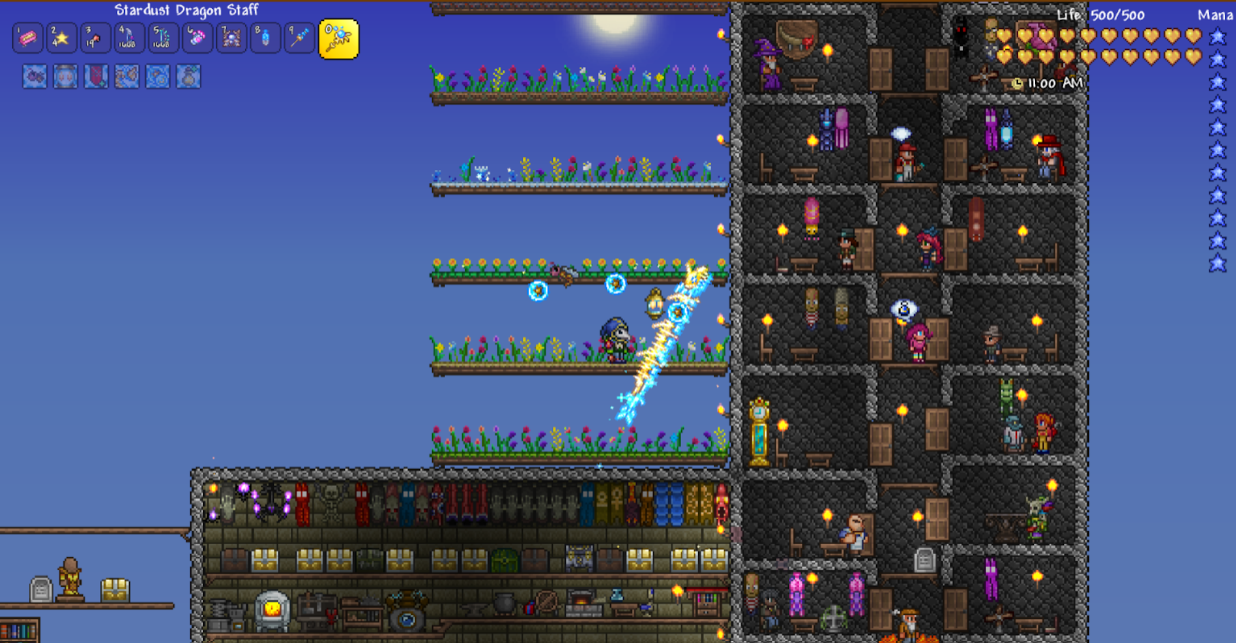 Editor’s note: We are starting a new series – ‘Tutorial Level’ – on people’s favourite games! Even if it’s not the sort of game you’re used to playing, we hope that you can appreciate the passion that goes into these articles. Amy writes about a game that many know only as ‘2D Minecraft’, but in fact offers much more in terms of RPG and combat elements.

Terraria is my favourite game, and I have been playing it for several years, but I have only really been trying to get to the ‘endgame’ throughout the last few weeks. Even before I was actively trying to fight all the bosses and finish the game, I still got many hours of enjoyment from exploring, mining, and crafting without any clear goal.

With the final big update coming to Terraria on May 16th, I have returned to the game with the actual goal of completing it before the major update arrives.

But Terraria isn’t really a game that you ‘complete’ and then move on to the next one, at least not for me. The best thing about Terraria is that it does a great job of being replayable and that it is a game that I can play long term.

This is due to the fact that there are multiple ‘stages’ in the game which dramatically change the difficulty, and that you can replay the game as a different class, choosing from ranger, summoner, melee, or mage. For me, the game feels endless.

It is fun to collect items and to try out different things from making cool buildings to building AFK ‘farms’ to get drops from enemy creatures. It feels satisfying to try and get all the achievements, to play with friends. It feels like an impossible task to do everything that you can do in the game.

A big turning point in the game is when you enter ‘hardmode’ for the first time after defeating a boss called The Wall of Flesh. Exploring the altered world, seeing the new enemies for the first time, and most importantly, realising you need new gear fast if you want to survive.

Then, just when you think you’re comfortable in hardmode, you get the Lunar Events which again change the world once more, adding a plethora of new enemies to defeat and changing the background and the colours of the areas that are affected.

Even then, there is still more to do: each world is slowly consumed by biomes that spawn unique enemies. It’s your choice whether to allow them to spread- as I normally do- or to try and ‘purify’ your world. You can even create your own, contained artificial biomes. Then there are the fishing quests, dungeons, chests to open and materials to find.

Terraria is a game which is just as fun with friends as alone. Playing with friends who play a different class style to you – for me, that’s pairing my summoner with a friend who plays as a ranger – leads to a team that is more powerful together than we are in our solo playthroughs. I like that this game encourages co-op multiplayer instead of competitive (though it can be fun to turn on PvP every now and then).

A focus on working together in multiplayer, especially when we can’t actually see our friends in person, is something that is important to me in the games that I play, and I think that this is a reason that I so often turn to Terraria.

It doesn’t matter if you want to play seriously and work towards a boss, or to just explore around while talking about something completely irrelevant over Discord, Terraria is the perfect backdrop for a playthrough with friends.

As 16th May approaches, I am excited about the new update, but it saddens me to think that this is the last time that there will be a large amount of new content for the game. It is definitely one that I would recommend to all fans of games like Minecraft or Stardew Valley, or people who are looking for a game to play with friends.