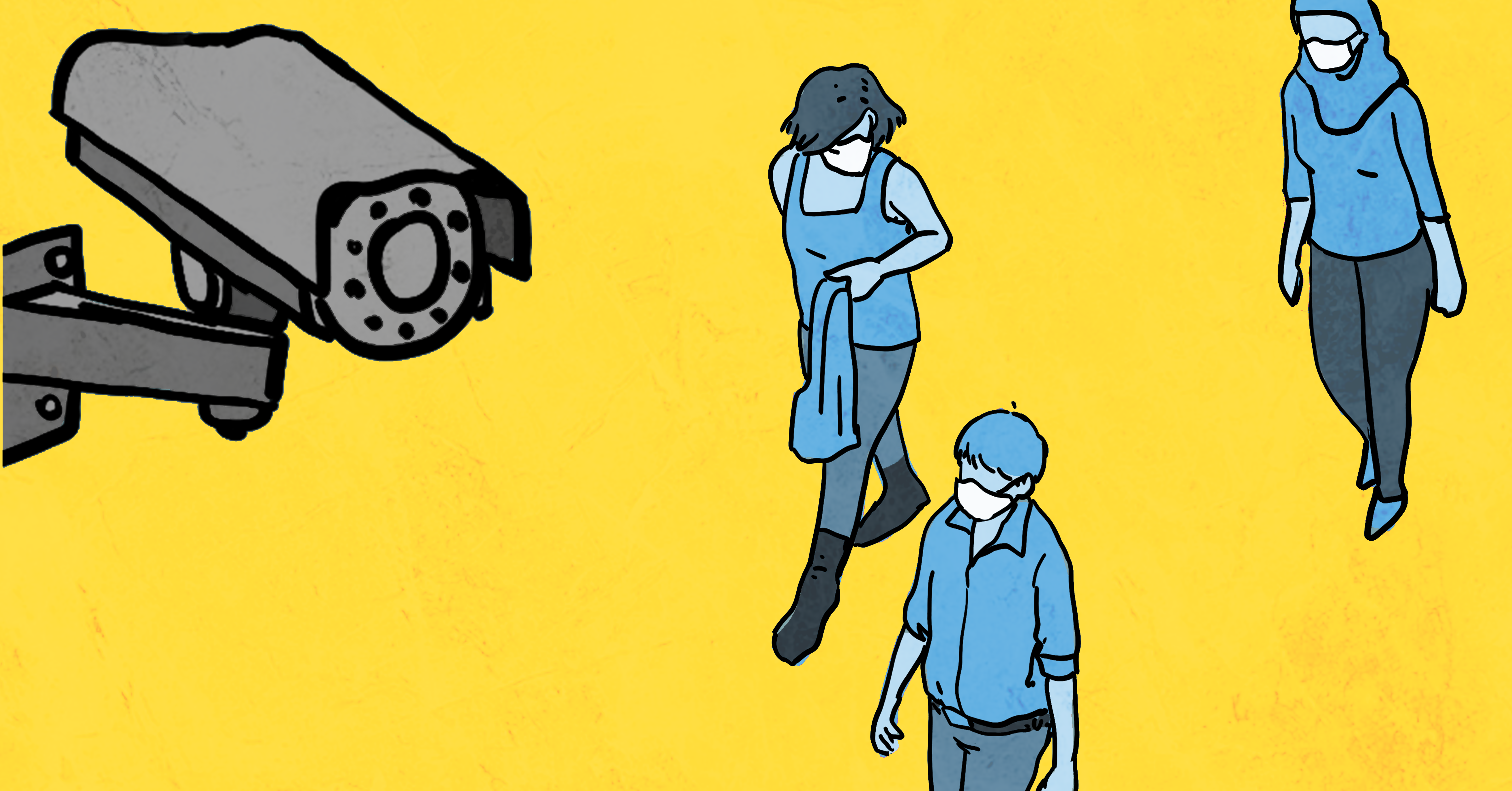 Technology can help us beat coronavirus, but we should be wary of losing privacy

The curve has been flattened. The peak has been passed. Life might soon, slowly begin to return to normal.

There is no doubt that lockdowns imposed by governments across the world and social distancing guidelines followed by millions have strongly reduced the transmission of coronavirus and have prevented hundreds of thousands of deaths. But as much of the world looks to get back its feet, could technology play a role in the easing of lockdowns, and prevent a much-feared second wave?

Different governments have tried different systems, but the central dilemma is the same: privacy versus security.

France is currently trialling a video-surveillance system to monitor the usage of face masks and their compliance with social distancing ahead of its planned easing of lockdown on 11th May. French citizens will be required to wear masks on public transport and in secondary schools, with shops and markets being given the right to ask shoppers to wear them too. These measures are considerably more lenient than the current situation, with people needing a certificate confirming their intentions for leaving the house, and a €135 (£119) fine issued if they fail to provide one.

The French authorities say that police will not be alerted when breaches of the mask and distancing rules are spotted, and the information will only be used in the analysis of public compliance and to inform policymakers.

Different governments have tried different systems, but the central dilemma is the same: privacy vs security

Such systems are not ground-breaking – they make use of existing surveillance cameras, which feeds into a trained neural network that identifies people, and another algorithm then calculates the distance between them. A little red-light flash if two people break the cardinal 2-metre rule.

AI-assisted population monitoring could easily be incorporated into places like London, with existing far-reaching surveillance structure. There are 627,000 CCTV cameras in London, one for every 14 people. Increasing the data pandemic modellers have access to increases their ability to make sensible decisions to save lives and livelihoods.

It is not just governments who have utilised surveillance – Amazon has this in place in some of its warehouses to protect employees. These technologies may seem beneficial tools in the analysis of social distancing, but the implications are profound. Companies could use the advances in AI monitor behaviour – which employees are taking too many cigarette breaks, who is spending too long in the bathroom. These technologies are already available, but the coronavirus pandemic has only accelerated this trend. This arguably makes an existing power imbalance worse; employers have greater powers to monitor and control employees, at a time when mega-corporations are using tactics to limit the unionisation of workers. So what could be seen as a sensible precaution during a pandemic could be used to further exploit low-wage workers.

The EU’s preferred post-lockdown strategy is extensive contact-tracing, facilitated by smartphone apps. The technology behind these apps is simple: when two people come into contact with each other, a Bluetooth signal is shared between the devices and the contact is logged. If one of these people develops symptoms of coronavirus, they record this in the app. Anyone they have come into contact with will receive a notification informing them of this. The results of testing symptomatic individuals are also put into the app, and the notifications are adjusted accordingly. Such apps have been used successfully across Asia, but the issue remains contentious in Europe.

The UK’s approach relies on patient responsibility: referring themselves for testing if they have symptoms and isolating themselves when instructed by the app.

Other European countries, such as Germany, are taking a different approach. The data collected by apps will be stored in a pan-EU server, managed by state health services. This has caused a dispute with Apple, which has developed software to allow contact tracing apps to run more efficiently. Apple’s operating system prevents contact tracing apps using its Bluetooth technology from running constantly in the background if the data is being moved off the device. This could be beneficial from a cyber-security point of view, as it protects sensitive data that could be leaked in the future. However, it prevents governments from seeing which individuals have been given warnings. This impairs the strategies of many authorities, whose track-and-trace policies rely on identifying and following up potentially infected individuals. Once again, there is a tension between privacy and health, this time putting companies at odds with governments.

This centralised sharing of information enables a globally coordinated response. Protective equipment and treatments can be funnelled to the worst affected areas. Global crises require global solutions. Arguably, if this kind of data sharing had been in place before the outbreak, the effects would have been on a much smaller scale. Public health authorities in Europe could have used data from China or Thailand, countries first hit by a coronavirus, and implemented more effective stricter measures.

Arguably, if this kind of data sharing had been in place before the outbreak, the effects would have been on a much smaller scale.

Indeed, countries with the strictest lockdown measures have seen the fewest deaths. Take Vietnam, for example, a country of almost 100 million people: it shares a land border with southern China and has a healthcare system lagging far behind that of Western Europe. Instead of the hundreds of thousands of deaths, Vietnam has recorded none, with just 271 cases of COVID-19 nationwide. (The UK, by comparison, has a population of 66 million and has recorded over 30,000 deaths). How did a nation such as Vietnam avoid a complete humanitarian catastrophe? The answer: extensive testing coupled with some of the most Orwellian measures seen outside of China. Mandatory publishing of the travel history of coronavirus patients on social media and in local news outlets to identify people with whom they have been in close contact. Furthermore, they have an app via which citizens can report suspected infections in the area to local authorities, have successfully contained the virus. These measures may have been accepted in the one-party authoritarian state of Vietnam, but the chances of such practices being welcomed by the West, however, are slim.

Where infringements of civil liberties face greater backlash, how can governments successfully monitor populations and enforce social distancing rules? And, more crucially, should they?

Laws passed in both Israel and Slovakia have permitted the use of mobile phone location data to track individuals supposed to be in quarantine. This has led to over 200 arrests in Israel for breaches of quarantine.  Furthermore, Israel’s Prime Minister Benjamin Netanyahu deployed the use of surveillance technology usually reserved for battling terrorism. Is the best way to combat pandemics the way we combat terrorism? Should we monitor infected people the same way we monitor terrorists? When a parliamentary subcommittee refused to authorise the measure, Netanyahu forced it through by emergency decree.

If we do not tread lightly, we are at risk of seeing strong-man leaders enacting unprecedented surveillance techniques without the normal checks and balances afforded to us in normal times.

But these are not normal times. The world is facing a pandemic of a virus scientists can still not understand, one for which we have no vaccine, and one that has already claimed the lives of over a quarter of a million people. Should the priority of governments not be to protect the lives of its citizens, whatever the cost?

There is no doubt that government surveillance technology can be used to enforce strict measures necessary to prevent deaths. And many would argue this is a small price to pay; when forced to choose between the lives of loved ones, or the intangible notion of ‘civil liberties’, for many the right answer is obvious. The reckless behaviour by rule-breakers is putting the lives of others at risk, such people should be tracked and punished to save lives.

Should the priority of governments not be to protect the lives of its citizens, whatever the cost?

Smartphones, cameras, and algorithms enable government surveillance to be conducted on a scale the KGB could only dream of. These technologies are adopted quickly because the threat of doing nothing is worse. The question is not of how far the technology can go; this is developing at break-neck speed and what is possible now seemed fantasy 10 years ago. Instead, the question is of how much is beneficial. Consider a hypothetical device worn by everyone that monitors vital signs – heart rate, blood pressure, body temperature and breathing rate. I have every faith that the scientific community will one day provide us with such a device that could tell us we are sick before we even know it ourselves. This, coupled with cleverly deployed algorithms, could collect and analyse our data, stopping the spread of infections. Opponents argue this opens the door for government and corporate hoarding of biometric data. Supporters point to the potential saving of lives.

Technology can doubtless play a role in the way we fight the coronavirus pandemic. But at times like this, our laws to limit their use cannot keep up with the lightning-fast pace of technological progression. Caution is therefore needed to avoid knee-jerk reactions that fix short-term problems, without considering the long-term implications in life after COVID-19. The risk is that once we give our privacy away, it could be gone forever.