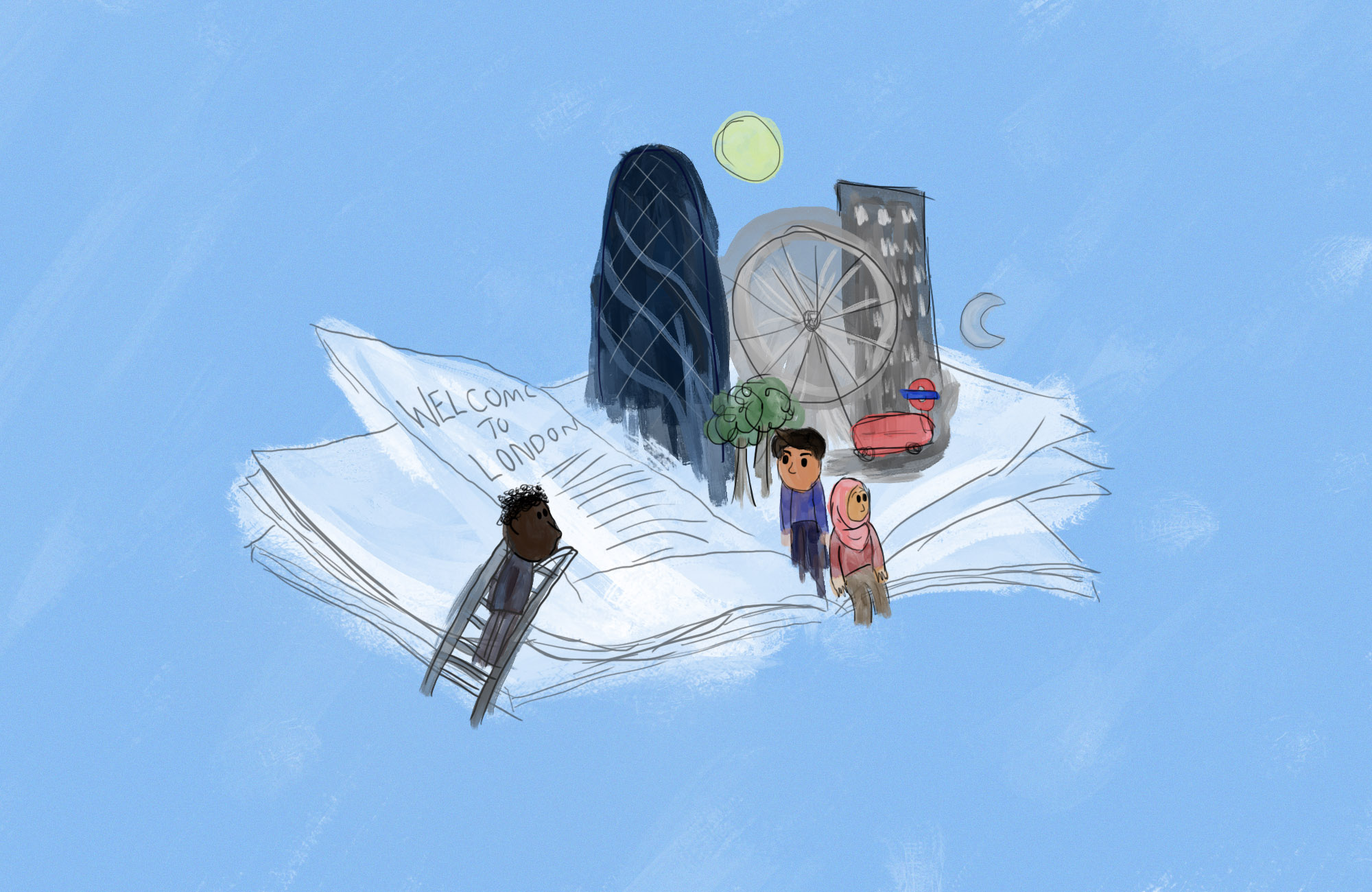 Book Review: ‘This is London,’ by Ben Judah

In A-Level History I was introduced to the well-used quote from L.P. Hartley that ‘the past is a foreign country.’ Yet, at times, it is the present that feels alien.

The imperial splendour of the 200-year old buildings on Strand, Drury Lane, Kingsway and Charing Cross Road – and the post-war, austere, brutalism of Barbican, the Southbank, the Hayward Gallery – reek of familiarity. They have provided more than just the backdrop for the London I visited as a child, the one in which I studied for almost three years. They are all steeped in the past, and on their roads and in their shadows, I’ve lived, laughed, suffered.

Yet, how much of London have I really seen? And, consequently, how much of a Londoner am I really? Is the city so large that it makes no sense to think of myself as a Londoner? All these questions come to me from reading the very first pages of ‘This is London.’

Ben Judah promises the tales from those that ‘you never meet.’ It is a blunt and truthful blurb. The portraits of the people he encounters across the city – neatly woven into chapter length vignettes named after different roads, estates or boroughs – live in a very different world to me and most of my peers.

The conversations he transcribes, un-sanitised and in the ineloquent ‘street’ slang which has replaced cockney, or the Americanised English of the middle-eastern oligarchs  which has replaced the ‘ahs’ and ‘oars’ of old money in Knightsbridge, or the unconjugated, heavily accented words from European immigrants who have picked up 40 words of English in half as many years, fills page after page as he lets the people he meets paint their own picture of their lives and their London.

We do not inhabit their London, even if we pass through it sometimes

My peers and I, from prosperous – sometimes rich – families, educated at private or selective state schools and at top tertiary institutions might brush with such folk, but only briefly. We do not inhabit their London, even if we pass through it sometimes. Perhaps we wander past the huddled tramps in an underground walkway, or hear the tube tannoy announce we’re at a train station that we’d never get off at.  Perhaps on Friday or Saturday nights, we are the ‘crowds that are all white – bar the token few,’ who inhabit ‘compounds of…privilege:’ clubs, bars, pop-up restaurants, enjoying expensive evenings in otherwise poor areas to which the locals are not invited. ‘These people tell you they like Peckham,’ quips a local whom Judah interviews, but he could easily say the same about Brixton, Shoreditch or Camden; ‘they love it like a prop…like a stage backdrop.’

Rarely do the Oxford-educated mix in neighbourhoods full of ethnic slums. The two-bedroom family apartments inhabited by 15 eastern-Europeans who tout for sub-minimum-wage work outside the nearby Wickes; the streets with white populations of less than 20 per-cent and those in which coming from the wrong postcode could mean meeting the wrong end of a blade or gun; few, if any of us, live near – let alone attend – the schools dominated by one ethnicity or religion where the teacher suspects her 13-year-old students are being married off by their parents.

And consequently, this book is required reading – for us at Oxbridge or any Russell Group institution. It is not just me or my well-off peers that have little acquaintance if any with the neighbourhoods rampant with gun or knife crime, run down areas with little or no diversity of ethnicity, language or wealth, ethnic ghettoes or harlot-lined streets. Upper class, middle class, lower upper middle class and upper lower middle class are all in a different world to the throes of hardship that Judah highlights. Most of us, too, will probably be unfamiliar with the giddy heights of wealth of some of Judah’s subjects. For many of us who read it, the book will literally be revelatory.

It is not an academic or typically bland sociologist’s or historian’s account of a city or a neighbourhood, but a collection of representative stories from people from whom we may be greatly different but whose emotions and desires are all too recognisable

What makes his work mesmerising is not only the lengths to which he goes in order to find people’s experiences, but his ability to get his subjects – individuals in a sea of thousands – to give their own narrative of their life and their origins. It is not an academic or typically bland sociologist’s or historian’s account of a city or a neighbourhood, but a collection of representative stories from people from whom we may be greatly different – and who are often greatly different from each other – but whose emotions and desires are all too recognisable. The recent immigrants who want to save enough money to make ends meet; the wannabe gangsters who want to strike it rich; the registrar – everyday seeing people marry – recounting her struggles with love; and the middle eastern princess who struggles to find meaning in her surprisingly circumscribed existence.

Judah’s work also throws the spotlight onto the ethnic segmentation of life in the capital city. Many of the most deprived areas are the ones that have seen their proportion of white residents plummet since 2001 – with levels hovering below a quarter in most such areas. The population change is notable to residents – and not just to the white residents who remain.

You may hear that London – with its 55-45 majority of non-white residents – is a beacon of diversity, shining forth as an example of a new cosmopolitan, colour-blind world. But this book reveals an unfortunate truth – that, for the most part, there is no diversity, just a collection of racialised ghettos, where one ethnic group dominates the rest or where the make-up is segmented between several different ethnicities of recently-arrived migrants.

An immigrant social care worker in Edmonton noted that people ‘automatically’ position themselves ‘into ethnic groups – or religious or cultural ones – and the people will immediately divide on those lines.’ In Peckham, a police officer is more stark: ‘the English are declining and they are declining fast…’ The officer is a Nigerian immigrant who arrived in Britain in 1989 who Judah notes as wary that he wouldn’t be allowed to say such things on record in his police station. Yet the evidence is in Judah’s reporting and the statistics which he quotes. Chapter by chapter, you see that all over the city, Anglican churches are re-purposed or closed and pubs have been boarded up where the new residents do not indulge in the vice of alcoholism.

Shehu, whose father also hailed from Nigeria but who, privately educated and financially flush, occupies a totally different world, highlights a root cause of the ailments of the city. Though wealthy, he grew up in the shadow and influence of inner-city gangs and saw grinding poverty and the wasting of young lives over petty disputes. He has his own hypothesis: that the English ‘can’t even talk about these problems,’ and the people who run newspapers, for example, ‘can’t conceive you can have rocket-high child-poverty in a street next to the rich.’ The ‘indirect references’ made by such folk include, according to him: ‘Migrant – poor immigrant. Expat – rich immigrant. Vibrant Multicultural Area – ethnic ghetto. Hardworking people – the poor. Disadvantaged people – that means your fucking impoverished.’

If we do not have an honest reckoning with the true state of London, how can we hope to fix it?

How much of this would we hear normally? Not much, certainly, if you’re a passive watcher of the news – which isn’t an indictment of the individual: most of us have more important things to do than to scour news reports and statistics. But it is an indictment of our news organisations and our politicians. We hear ‘tough on crime’ rhetoric, but the sort of violence that subjects recount in This is London are happening with greater frequency year on year. We hear that we are a successful multi-ethnic and multi-cultural society, but the reality on the ground looks much different. If we do not have an honest reckoning with the true state of London, how can we hope to fix it? This is London does not provide an answer – it is a work of journalism, not a public policy paper – but having an understanding of the mammoth issues at hand can only be a good thing. I do not often quote scripture, but John 8:32 can guide us: ‘You shall know the truth, and the truth shall set you free.’

Armed with a better knowledge of London as it is, we may not be set free spiritually, but we will be in a better position to debate its future. And our politicians and press-barons may be in a better position to make this city a better place to live in. It is thus not just required reading for Oxbridge students studying right now, but also for the Oxbridge graduates who have long since graduated and who now sit in positions of power and responsibility.