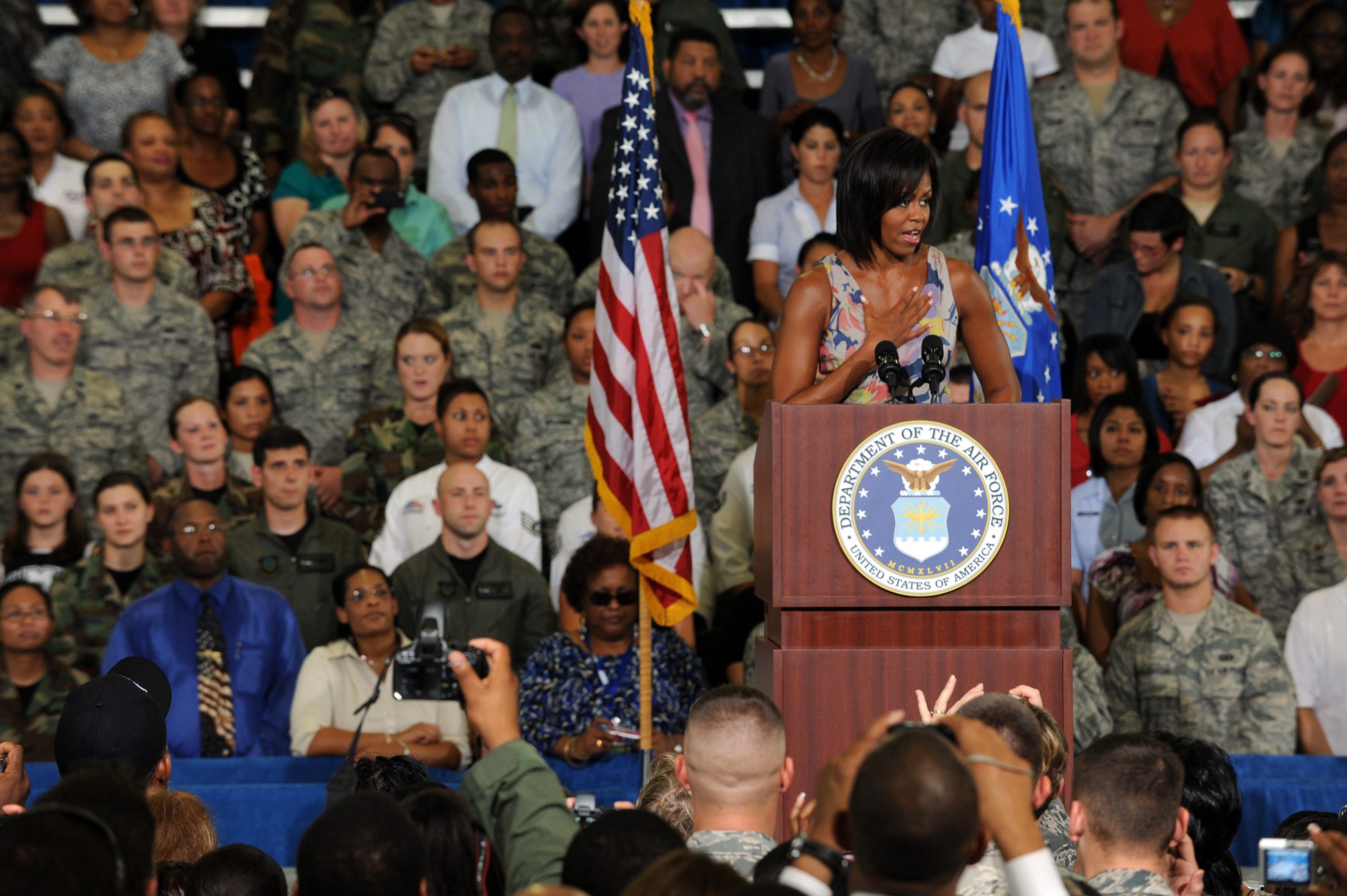 What does the Netflix documentary ‘Becoming’ reveal about Michelle Obama’s current role in a despairing society?

‘Becoming,’ a documentary directed by Nadia Hallgren, follows Michelle Obama on the tour of her eponymous 2018 memoir. After just 15 days, sales of ‘Becoming’ soared, earning the title of the best-selling book in the US for the whole year. The success of her memoir is not only a testament to Michelle Obama’s popularity, but revealed an audience hungry for her inspirational words of wisdom. This documentary provides intimate snapshots of Obama’s life, including her struggles as a public figure, desire to motivate young people, and the recognition of her power as a woman of colour on the global stage. It appears that, years after her book’s publication, the world is in need of Obama’s message more than ever.

Obama expands on personal stories from her memoir, and the documentary navigates these experiences deeply, and sensitively. For instance, Obama recounts being told she would never get into Princeton, the college her older brother had gone to, and this motivated her more. Obama was determined to find out “what was all this that I wasn’t good enough for?” Obama’s natural humour colours all her life reflections, especially when it comes to her setbacks. It is these negative experiences that she draws on to aphorize, insisting that young people shouldn’t listen to those who erase their opportunities. As a working-class black student who did get into Princeton, and then Harvard Law School, Obama seemed like she was thriving.

However, in the documentary, Obama confesses feeling like a mere “box-checker.” Perhaps this was the result of the combined pressure of her family’s hopes for her, the pressure she put on herself, and the expectations of a society that viewed black women as “less than.” Despite the negative connotations of the pressures she faced, Obama has unwaveringly high expectations of today’s young people. The documentary features Obama talking to people of colour in schools around the US, urging them to face their inevitable setbacks with resilience. Obama explains that “if we can open up to each other and tell our stories, our real stories, that’s what breaks down barriers.” And Obama does just this in ‘Becoming,’ proving that telling authentic stories is empowering. Indeed, telling the younger generation to “be vulnerable, and believe your story has value,” empowers them, too.

The documentary delves into the personal identity of Obama, particularly when she reveals how her marriage to Barack, and the arrival of her children, took a toll on her life. As wife to an opinionated man, and mother to young children, Obama began to lose sight of own voice, and dreams. Her self-sacrifice has always been apparent, like when Obama quit what would have been a comfortable law career to begin engaging in local politics. Obama’s long-time aide and close friend, Melissa Winter, even jokingly tells the camera “she doesn’t like politics.” Unfortunately, Obama’s altruistic, generous spirit was getting the best of her, and she found her own self fading away. This sentiment resonated with many mothers who read the memoir, and many of them thanked Obama for her transparency at her book signings. One African American mother tearfully grasps Obama’s hands in her own, thanking her for speaking out about postpartum depression, and the struggles of raising children. This truly epitomises what a wide-ranging role model Obama is, a beacon of hope for anyone who has suffered difficulties, but especially for women of colour.

Director, Hallgren ensures Obama’s experience as an African American woman is dealt with thoughtfully, by illustrating the intersectionality of her identity. Michelle Obama states confidently in a confessional scene, “I am the former First Lady, and descendent of former slaves.” Obama sees the power in this, reclaiming her identity as a black woman, and acknowledging the pain of her ancestors’ past, to make this a tool of strength. Obama hopes other African Americans can do this too, urging them to not see themselves as “invisible” any longer. Instead, Obama forces herself to be visible in a society that tried to erase her. Obama has pride in what was used against her, confidently stating “I grew up on the south side of Chicago – that’s all you need to know,” and letting a camera crew tour the small house she grew up in. From such humble beginnings, Obama would become, in her brother’s words, “the most popular woman in the world.”

And yet, the opposite can be said when remembering the media’s vehement onslaught during her husband’s presidential campaign. The media targeted Obama’s race, painting her as an “angry black woman” in headlines, and criticising her character as “whiney,” “unpatriotic” or “overbearing” on national television. Overcoming this experience was Obama’s “ultimate challenge.” As a result, she learned to shape her image, so that it couldn’t be used against her. For example, after learning how much appearances do matter, Obama learned how to use fashion as a tool, as opposed to “being a victim of it.” Her stylist dressed her very modestly during Barack Obama’s presidency, a visual representation of the dilution of Michelle’s self for the sake of assuaging the media. However, the outfits for her book tour for ‘Becoming’ are bold – blue satins, white gold sequins, or bright yellow jumpsuits – as bold as the stories she tells on stage.

The victorious moment when Obama steps onto the stage during her tour, as ​This Girl is on Fire​ booms in the background, and renowned celebrities such as Oprah, Reese Witherspoon, Gayle King, or Steven Colbert lead a discussion, is astounding. We see a woman who has, against all odds, defined herself by telling her story. After having her character torn apart on such a large platform, suffering slander, Obama emerged from the flames anew. And so, when advising some Reservation students about how to cope when seeing others wearing Trump hats, she uses her experience with the media as an example of spirit. At that time, all Michelle and Barack could do was “get up and do [their] jobs and let [their] lives speak for themselves.” And by writing ‘Becoming’, going on tour, and through the release of this documentary, it is clear that Michelle Obama’s story is not just speaking for herself, but it is speaking to a whole community of people in need of hope.

For people in America, disillusioned by the Trump presidency, the Obamas represent a recent, yet still nostalgic past of progress

Perhaps it is Obama’s grounded nature, but even she doesn’t seem aware of the colossal impact she’s had, and what she represents to a whole new generation. The documentary reveals moments, as Obama enters a venue or gets into a car, when shouts from the public rise up, voices that wish she were in office. In one poignant, intimate scene, where Obama talks with black elderly ladies in a church, none of them can get over seeing an African American couple in the White House, and agree that Michelle Obama will be ​their ​First Lady forever. For people in America, disillusioned by the Trump presidency, the Obamas represent a recent, yet still nostalgic past of progress, such as the passing of Marriage Equality, and the hope that the community can come together again. Obama scoffs that her husband’s election was suggested as evidence of a “post-racial USA,” and insists that their existence was, and remains, a provocation.

It’s important to note that the title of the memoir and documentary, ‘Becoming,’ is in the present participle tense, as Obama is still becoming, still evolving, still growing as a role model and mentor. She also still faces adversity, as seen by the recent resurfacing of an internet conspiracy that Michelle is transgender. The documentary insightfully showcases Obama’s resilience, and the transformational impact her words continue to have upon young people. Gayle King remembers Obama’s famous phrase from 2008, “When they go low, we go high,” and Obama insists this mentality is just as important now.

In the political climate of coronavirus, when things seem more uncertain than ever, the Obamas continue to play a significant role. Barack Obamas’ recent virtual commencement speech, for example, saw many people on social media heralding him as the ​real ​US President. I am so grateful for the Obamas, and for this documentary, for acting as a symbol of optimism. The documentary moved me to tears (Godspeed by Frank Ocean always does), and made me reflect on the lack of role models of colour in this country.

I never understood, at eight years old, the true importance of an African American being elected as the leader of one of the most influential countries in the world. And now I, like many others, yearn for an example to lead us out of these dark times. The morality that the Obamas have always fostered, for making positive changes in society, progressing as a community, and creating equal opportunities, is where we should start. And after watching ‘Becoming,’ it is clear that Michelle Obama has created her own cult of progress, with her as the perennial First Lady, leading us to becoming better, empowered versions of ourselves.