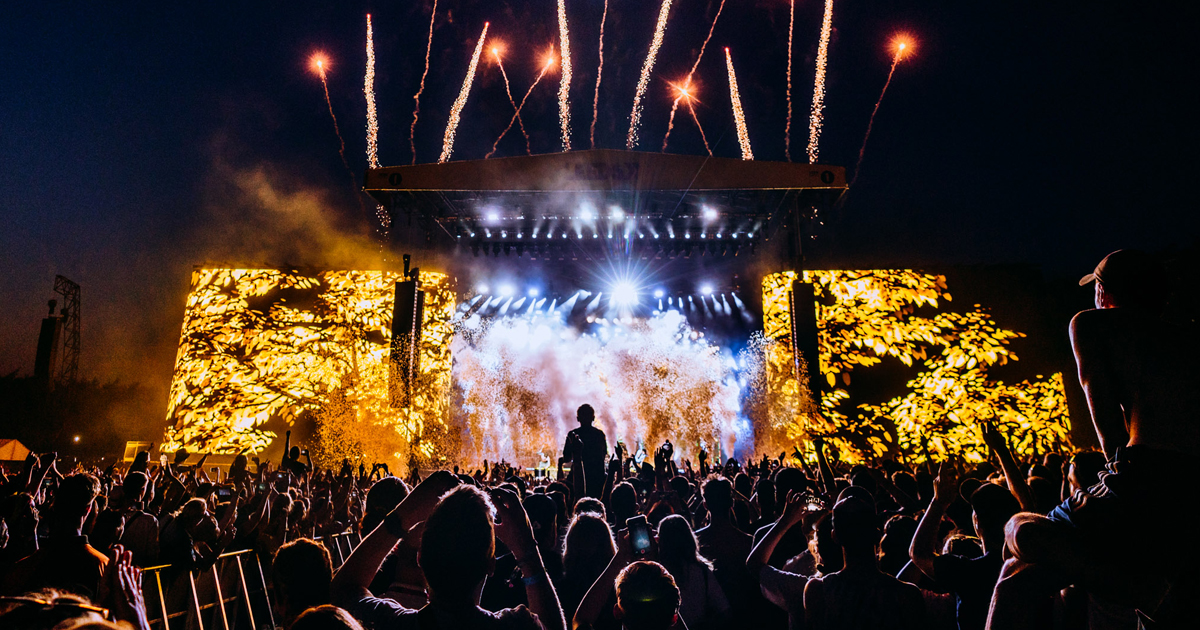 Image Description: Crowds at a festival

I took my time to get into the 1975. The phenomenon of their ever-growing fame has been fairly recent in terms of universal recognition. I’ve been exposed to them for a long while though, with my high school friends overflowing with excitement over an album whose title was way too long for me to remember at the time (I like it when you sleep for you are so beautiful yet unaware of it).

Fast forward a considerable amount of time to August 2019: The Leeds Festival or ‘Leeds Fest’ as everyone calls it, was set to take place on a sweltering August weekend. Being our first time at the festival, my friends and I cautiously purchased day tickets for the Saturday, the day the 1975 were headlining. I had been somewhat reluctant to choose Saturday day passes, my preference being to see Billie Eilish instead on Sunday, but when your best friend is deeply, deeply in love with the headlining band… you would be an extremely bad friend for making things difficult.

So, that hot Saturday arrived and we were drenched in sweat and glitter just like everyone else there. For the record, don’t let anybody kid you that the toilets are any better than a pit in the ground, they’re worse. All I can say is, don’t look down. I’d much rather topple from a skyscraper than into the Leeds fest cesspit of sweating human waste. Anyway, it’s all part of the experience, I guess.

After a day of getting lost, critical dehydration and seeing an eclectic range of acts including Hayley Kiyoko, Royal Blood, Clairo and the Wombats, it was finally time for the headlining act.

Dusk had fallen by the time the 1975 walked onto the main stage, and the air was no longer humid and oppressive but mingled with cigarette smoke, less legal smoke and excited breaths. The sky itself, not topped by any tent roof, seemed to pound with the feedback from the giant speakers which were built into towering metal structures.

The sky itself, not topped by any tent roof, seemed to pound with the feedback from the giant speakers

It sounds dramatic, but that moment of waiting for a band to step forward and speak that first breathy word into the microphone feels charged with electricity. You can feel the bated breath of the thousands of bodies surrounding you as though everyone’s lungs were suspended in the time it took Matty Healy to utter his first word.

Then, the concert began. The band started with their, new at the time, punk single ‘People’ and the energy only mounted from there. Whatever your opinion, or lack of opinion, might be of frontman Matty Healy there is little denying his dominating stage presence. For a not especially tall man, he manages to somehow fill the stage to the extent that there’s hardly enough room for the other band members.

The concert was incredible, the crowd moshing (something that may be lost to us for a while now) to bangers like ‘the sound’ and slow dancing to the sway of ‘fallingforyou’. Yet, the most exhilarating and frankly extraordinary moment came with a slow tinkling intro, growing in tension until out echoed the words: ‘You should be loving someone.’

The most exhilarating and frankly extraordinary moment came with a slow tinkling intro, growing in tension until out echoed the words: ‘You should be loving someone.’

For some context, ‘loving someone’ is a song for the LGBT+ community. It is an anthem of loving. Its simple but emotive cry, ‘you should be loving someone’ starkly and nakedly questions why on earth who you love is anyone’s business but your own.

As the song boomed through the festival speakers, I along with my best friend began to shout and clutch one another in excitement. Slightly premeditating this opportunity, I had brought along with me a pride flag which was stuffed, crumpled but bright, into my bag. The words and the music and the adrenaline continued to beat on and on. I beckoned toward my friend and asked them to lift me onto their shoulders.

We were facing away from the stage as we manoeuvred this, so I couldn’t see what was going on behind me. Once I was hoisted up, I felt like Emma Watson when she climbs onto the roof in ‘the perks of being a wallflower’. Infinite really isn’t a bad word for it, as I draped the pride flag over my shoulders and screamed those lyrics of raw, unfiltered love.

Infinite really isn’t a bad word for it, as I draped the pride flag over my shoulders and screamed those lyrics of raw, unfiltered love

Caught up in the air like that, I almost didn’t notice the people shouting around me telling me to turn around.  As I was wheeled around still atop shoulders, I saw my face framed by the flag behind me splashed across the big screens on stage. It was a strange moment of disassociation, as I didn’t at first identify the pure happiness on that girl’s face with my own.

As quickly as it came, the moment was gone. Yet, I was surrounded by the congratulations of people around me as the song continued to pound. As I was about to descend, a boy behind me with an old film camera shouted if he could take my photograph. I was pretty overwhelmed, so I just nodded eagerly and let him capture me at that moment: suspended in the night-time with a rainbow billowing behind me, and behind that, a band singing about love.

I don’t know who that boy was, or where that photograph is. Whether it’s on his wall or lying under his bed in strips of undeveloped film. I do like to think of it existing though.

I don’t know who that boy was, or where that photograph is. Whether it’s on his wall or lying under his bed in strips of undeveloped film. I do like to think of it existing though, its realness anchors me to the preciousness of that moment and reminds me that I should always, always be loving someone.