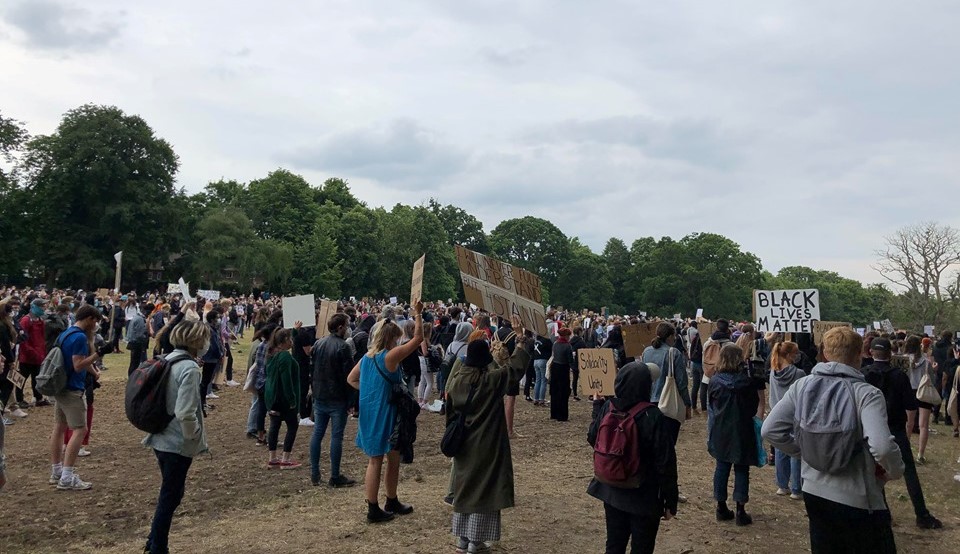 The socially-distanced demonstration was originally planned to go forward in Bonn Square, but as demand increased in the days before the event, the location was changed to a larger space. Messages on their Instagram page read: “We have received much more support than we ever could have expected, and we want to assure we can abide by social distancing rules!”. The same post also pointed out the heightened importance of this considering that BAME individuals are more vulnerable to the virus.

The protest kept to social distancing measures as planned. Notices reminded protestors to wear face masks and gloves, as well as stressing the general UK advice of two-meter distancing and regularly washing of hands, with hand sanitiser if a sink is not available.

The flyer that advertised the march emphasised that: “this is a PEACEFUL PROTEST and we will encourage people to leave if it gets out of hand!”

This comes at the same time as nationwide protests, including one in Hyde Park, London, as well as worldwide action across all the continents. In Oxford, protestors held up placards while speakers addressed them.

Although the Black Lives Matter movement has been around for a long time, footage of the death of George Floyd, who was killed by a white police officer in Minneapolis this May, has brought a new surge to the movement. In the USA, a week of protesting has led to further action against the cops involved in George Floyd’s case, with three more former cops charged today (the third of June).

Oxford City Council leader Susan Brown tells the Oxford Mail: “Oxford City Council values individualism and freedom. We want everybody to have a voice, to not feel silenced and to be supported in speaking out.” She adds: “we are here to listen to people in our communities who are scared, angry and hurt by what we have been witnessing and by injustices they may face in their own lives.”

The MP for Oxford West and Abingdon, Layla Moran, although unable to attend, supported the event, stating: “I and the Liberal Democrats stand firmly with the Black lives Matter movement – we can’t allow George Floyd to be just another name”.

Within the UK, many of these socially-distanced protests have proved controversial, as some worry that they will compromise lockdown measures, while the government are warning of a second spike in death rate.

UK Police leaders published a statement reminding protestors of the current government guidelines, which restrict outdoor gatherings to six people, and saying: “The right to a lawful protest is a key part of any democracy, which UK police uphold and facilitate. But coronavirus remains a deadly disease and there are still restrictions in place to prevent its spread, including not gathering outside in groups of more than six people.”