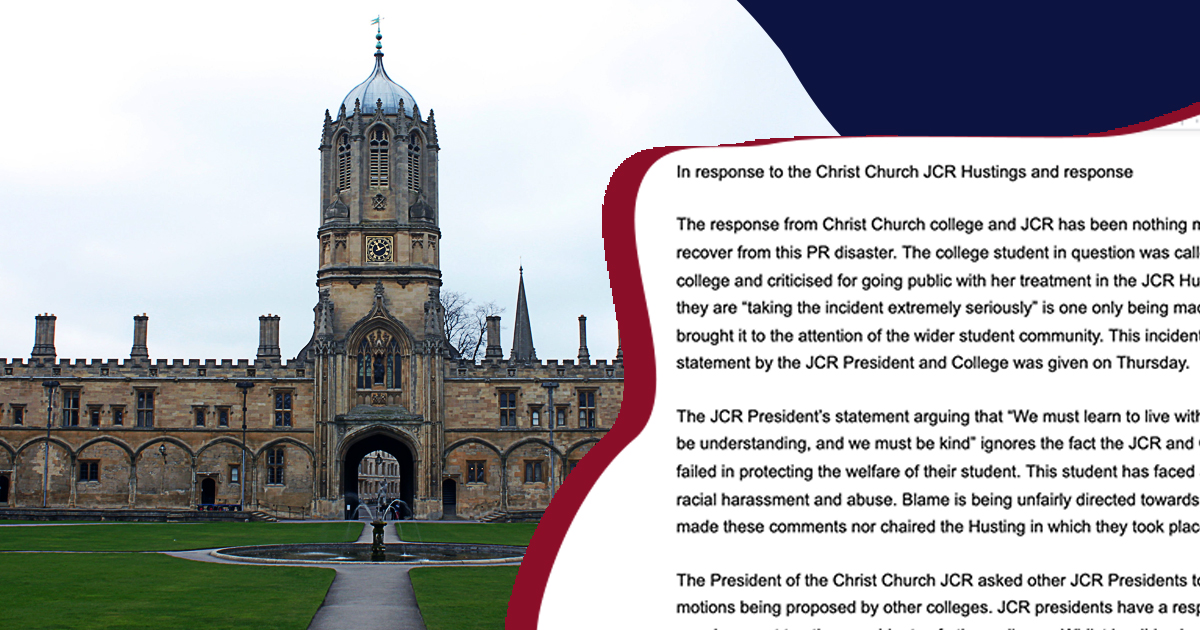 A group of Oxford students have created a petition responding to racially insensitive events which occurred during a Christ Church College JCR hustings, and the subsequent official statement released by the College today. The petition aims to bring to light the mistreatment of a black student, Melanie Onovo, who spoke out against the events of these hustings publicly and has since been contacted and criticised by the Christ Church Deans for doing so.

Christ Church College’s response was prompted by heavy backlash and controversy following a JCR hustings in which a student running for cake rep (a welfare position unique to the College) drew comparison between flour shortages and the ongoing George Floyd protests in America. The official release features a statement from the JCR president, who was quoted alongside the petition, saying: “we must learn to live with one another. We must be understanding, and we must be kind.”

The petition, accompanied by a statement condemning both the events of the hustings and subsequent handling of it by the College, is aimed to reached the JCR pages of all Oxford colleges, and begins: “the response from Christ Church College and JCR has been nothing more than an attempt to recover from this PR disaster.” The students criticise the length of time between the incident on Sunday the 31st of May and the statement published on the 4th of June.

It further argues that: “This incident… has highlighted a lack of welfare and support at a college and university level.  It should not be the responsibility of one black student to shoulder the public race relations of their own college” Before disclosing: “However, ultimately these systemic failings come at the hands of Christ Church senior leadership.”

The aim of the petition is to encourage a public apology from the Senior and Junior Censor of Christ Church College, “for their negligence of duty and vilification of a student within their duty of care” asking also that the individual referred to is supported by their college henceforth.

At the time of this publication, the petition already has over 280 signatures.

When approached for comment, an individual taking part in this petition urged JCR members to sign it, stressing: “the affected student deserves our support. Regardless of your stance on the original issue, the college’s way of handling it since has been unacceptable.”

Speaking to The Oxford Student, Onovo said that she was “sold dreams by the Dean and nothing really has been done. They keep coming to me asking what I want to happen, but they should just know.” Before the College’s official statement was publicly released, Christ Church’s Senior Censor contacted Onovo asking her to “comment” on it. In the final release, additional information was added including more detail on their existing anti-bias sessions as well as a commitment to new initiatives to combat prejudice.

The same group of students who wrote the statement have been attempting to pass motions condemning the events at Christ Church, in JCRs throughout the university, while the President of Christ Church’s JCR “asked other JCR presidents to consider suppressing motions being proposed by other colleges”.