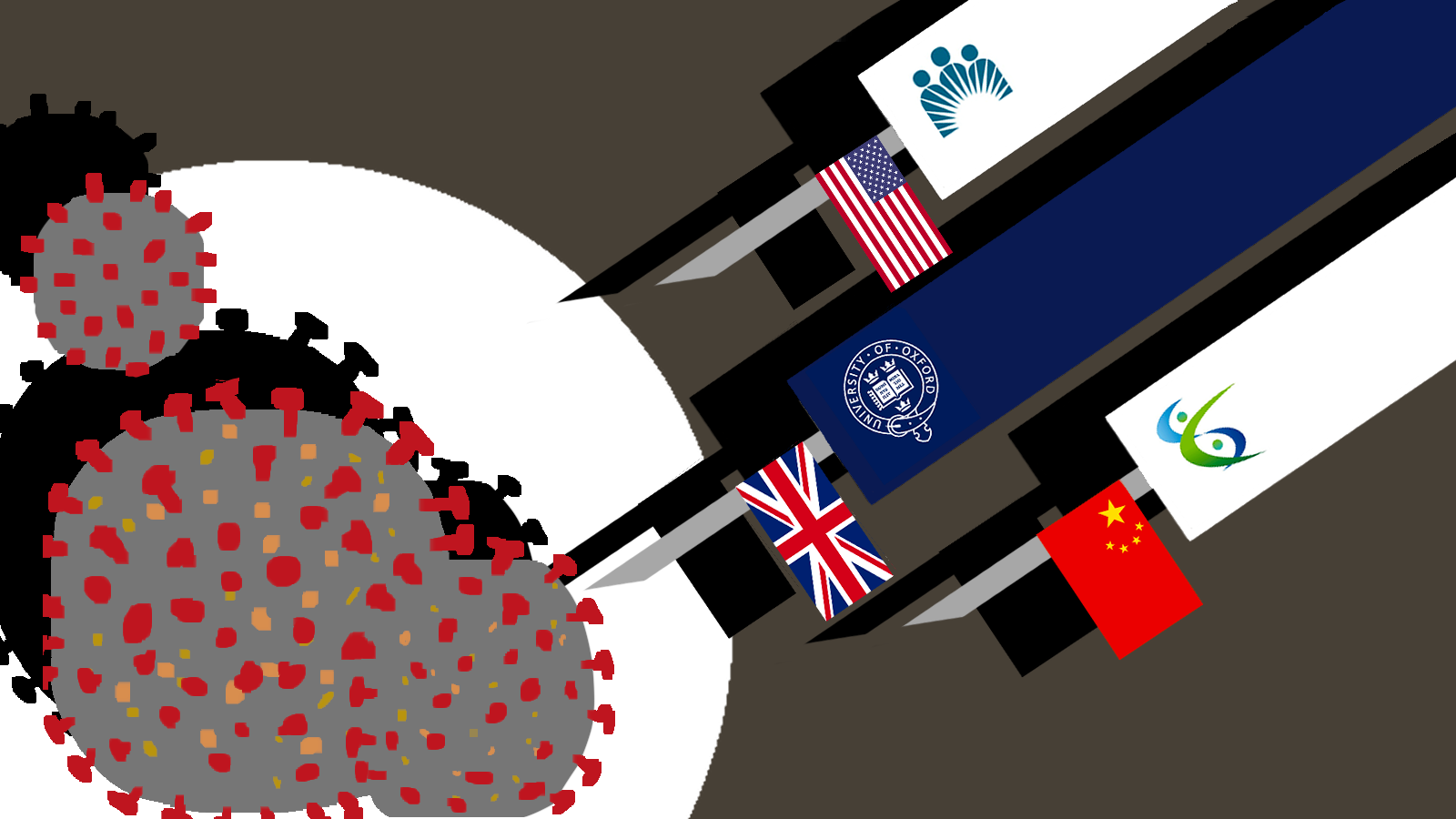 Across the globe, scientists are working tirelessly to produce a COVID-19 vaccine, with over 100 potential candidates in development. A successful vaccine could prevent millions of deaths worldwide and allow devastated economies to begin the road to recovery. But with an estimated minimum timeline of 18 months, is it possible that a vaccine will be available this year? Despite the odds, at least 9 vaccines are already in clinical evaluation – of which 5 are leading the race.

Since the first vaccine was created by Edward Jenner in 1796, vaccine development has been established as a lengthy, often fallible process. Their life-saving capability is contingent on herd immunity: how the immunity of a significant proportion of a population can provide indirect protection for non-immune individuals.

Vaccines achieve immunity by introducing an inactivated pathogen or pathogen-like substance that stimulates a neutralising immune response that can be rapidly activated in the event of re-infection. Current candidates focus on the ‘spike’ protein on the surface of SARS-CoV-2 particles that permits entry to human cells.

Sponsor: the University of Oxford, AstraZeneca

Funding: UK Ministry of Health, the University of Oxford, BARDA

Scientists at the Oxford Jenner Institute are leading the UK effort, in partnership with the British-Swedish pharmaceutical giant AstraZeneca. Their candidate contains a weakened version of a chimpanzee adenovirus containing the spike glycoprotein gene. So far, evidence for its efficacy has been mixed – but the government hopes to produce up to 30 million doses by September if successful.

Phase 1 trials, which primarily assess the safest dosage of a drug, began in April with more than 1000 inoculations. On 22nd May, researchers started recruiting over 10,000 subjects for Phase II/III trials, which will aim to discover differences in immune response and viral susceptibility in a wider age range of subjects.

A recent preprint showed that AZD1222 prevented rhesus macaques from developing pneumonia when exposed to SARS-CoV-2. However, the animals still became infected, showing similar viral loads between vaccinated and unvaccinated samples. This has prompted questions about the candidate’s ability to prevent spread in humans. Regardless, the project is set to receive £65.5 million in government funding, as well as $1 billion from the US government.

Utilising a similar approach, the Chinese biopharmaceutical company CanSino Biologics has started enrolment for Phase 2 trials of its candidate Ad5-nCoV. The vaccine, which uses a non-replicating viral vector to deliver antigens to cells, employs the same technology used for the company’s Ebola vaccine (Ad5-EBOV).

Ad5-nCoV appears promising from Phase 1 trials, becoming the first COVID-19 vaccine trial published in a peer-reviewed journal. Nearly all subjects developed binding antibodies after 28 days, while 63 developed ‘neutralising antibodies’ – which prevent pathogens from entering host cells. Nonetheless, there were some troubling findings. 81% of volunteers noted a mild-to-moderate adverse reaction and 5 participants receiving the highest dose experienced significant fever. There are also concerns that immune familiarity with the adenovirus could impair antibody production.

US biotech firm Moderna’s candidate established itself as a frontrunner upon becoming the first SARS-CoV-2 vaccine trialled in human volunteers back in March. It uses mRNA to deliver viral genes into cells to trigger the production of antigens – which consequently induce a systemic immune response. Currently, there are no mRNA vaccines licensed for use in humans.

Interim Phase 1 data indicated widespread production of binding antibodies to a quantity previously observed in convalescent plasma, as well as neutralising antibodies in 8 participants. Despite these findings, the latter results only apply to 8 out of 45 subjects – and the 4 participants who experienced ‘Grade 3’ medically significant events are a cause for concern.

German immunotherapy company BioNTech has partnered with US pharma giant Pfizer to produce its mRNA-based BNT162 vaccine. Aiming to produce an effective vaccine by October 2020, Phase 1/2 trials of 4 related candidates have commenced in Europe and the United States.

Through using a combination of nucleoside-modified and self-amplifying mRNA, researchers hope to identify the most promising candidate through monitoring participant antibody production. Beyond the realm of vaccines, Pfizer is also advancing therapeutic research into a protease inhibitor developed during the 2002-2004 SARS epidemic.

As the only DNA vaccine in clinical evaluation, an innovative approach and MERS vaccine experience should aid Inovio Pharmaceuticals’ candidate. INO-4800 works similarly to an mRNA vaccine – except it delivers plasmid-enclosed viral DNA.

After enrolling 40 healthy volunteers in its Phase 1 trial, Inovio published its initial findings obtained from animal studies in the journal Nature Communications. The article states that INO-4800 produces “antigen-specific T cell responses” and “functional antibodies which neutralize the SARS-CoV-2 infection” in mice and guinea pigs. With preliminary data expected in June, Inovio is already planning Phase 2/3 trials, set to take place this summer.

In the pursuit of a vaccine, two narratives have emerged: international collaboration working towards a “global public good” – and corporate competition between institutions fighting for recognition.

Many believe that the US approach is centred on ‘vaccine nationalism’ – prioritising a vaccine for its citizens first and foremost. This is not a new phenomenon. During the 2009 H1N1 virus outbreak – which killed over 200,000 people – high-income countries like the US and Australia safeguarded their populations while delaying aid to developing nations.

Amid growing US-China tensions, the Trump administration has taken a hardline approach regarding vaccine nationalism – exemplified by Trump’s severing of ties with the WHO. The establishment of Operation Warp Speed has marked a sizeable investment in foreign developers, including the Oxford/AstraZeneca partnership and the French biopharma firm Sanofi. These investments come with caveats, however – for example, the US is requesting a minimum of 300 million doses of the Oxford vaccine. Paul Hudson, the CEO of Sanofi, claimed that the US had the right to the “largest pre-order” as a result of its financial support – an action condemned by the French prime minister, Édouard Phillipe.

On the other hand, international organisations have collaborated to accelerate vaccine development and ensure fair distribution, including the World Health Organisation, the Coalition for Epidemic Preparedness Innovations, and the Global Alliance for Vaccines and Immunisation. The CEO of Moderna hopes that “three, four, five vaccines” will succeed as “no manufacturer can make enough doses for the planet.” A meeting of the leaders of four pharmaceutical giants (AstraZeneca, GlaxoSmithKline, Pfizer, and Johnson & Johnson) reinforced the need for both collaboration and innovation, with the Pfizer CEO stating that “the only rivals are the virus and time.”

Scientists estimate that around 15 billion vaccine doses will be required to defeat COVID-19. No nation can end this pandemic alone.