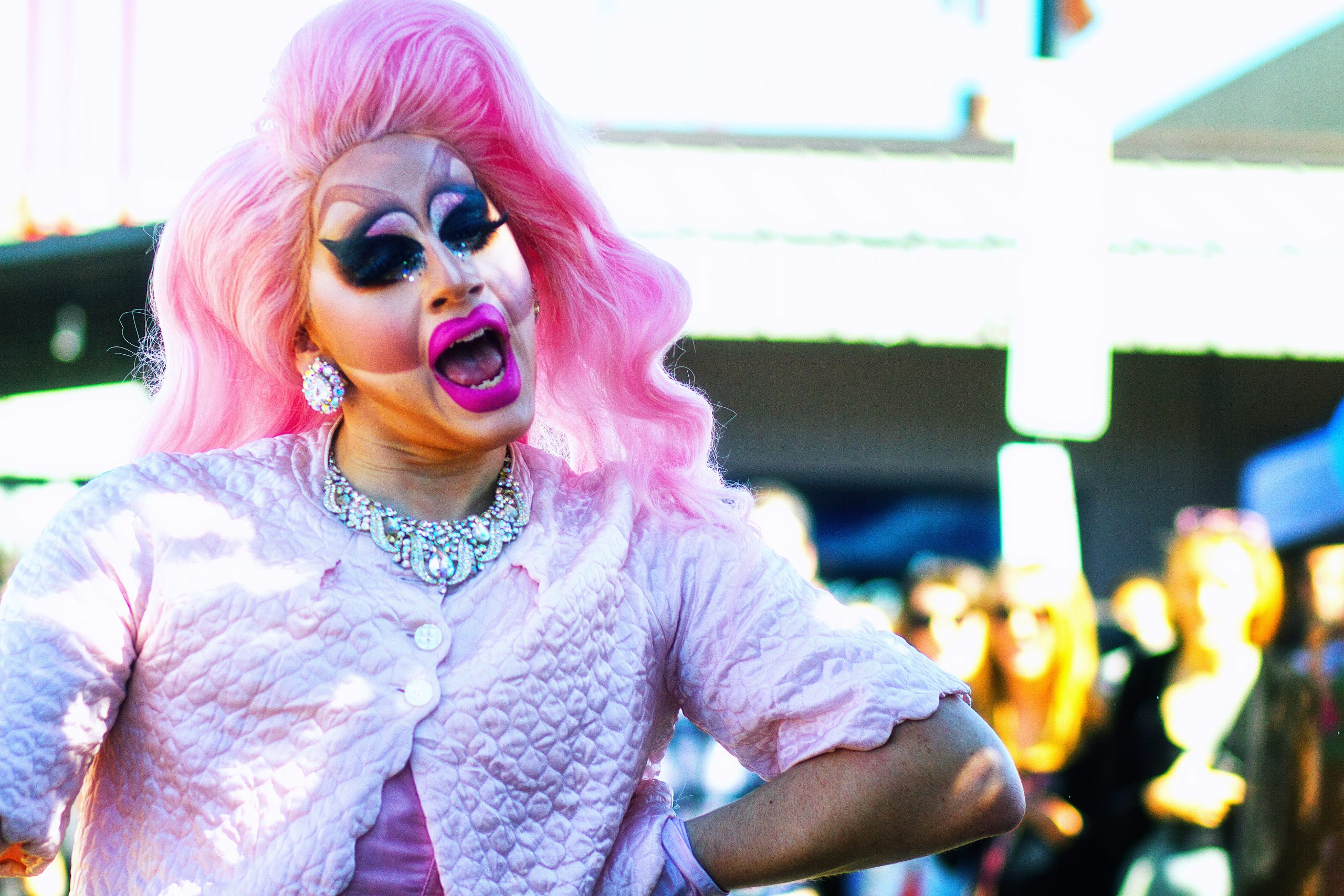 The drag queen Trixie Mattel, otherwise known as Brian Firkus, is the winner of Drag Race All Stars Season 3, but also a confessed, obsessive Barbie doll collector. Firkus’s love for Barbie started when he was young. As a gay boy from Milwaulkee, he wasn’t allowed “girl toys,” but was fascinated by the tanned, blonde, fashionable dolls. Indeed, the name ‘Mattel’ comes from the toy company that manufactures Barbie dolls, and Trixie’s aesthetic pays homage to Barbie, from the trademark blonde wigs to the bright pink, garish outfits.

In Trixie Mattel’s youtube series, ‘Trixie’s Decades of Dolls,’ she takes a deep dive into her Barbie collection, picking out her favourite dolls out of her hundreds, from the 1960s to the 1990s. In doing so, Trixie astutely notes how these dolls are essentially “snapshots of American history.”

As such, we can see how feminine stereotypes were propagated during these periods, by analysing the fashion, makeup and careers of these iconic dolls.

Starting with the 1960s, where a boom in consumerism made buying fashion dolls very popular, the careers of Trixie’s favourite Barbie dolls are interesting to examine. For instance, Barbie Loves to Cook (1965) and Barbie-Q (1959-62) offer a domestic depiction of Barbie; the ultimate American woman. Barbie-Q’s outfit is a white chef’s apron and hat, figuring Barbie as belonging in the kitchen, fulfilling societal expectations of womanhood.

Notably, the companion doll to Barbie-Q is Cheerful Chef Ken (1964), and Trixie Mattel quotes M.G.Lord’s book, ‘Forever Barbie,’ to suggest that these toys were sold as a couple to subliminally influence young girls. These fashion dolls, with long slender legs, tiny waists and perfect features, taught girls about makeup and hair, to make themselves more attractive, more marriable, and thus more financially secure.

Fashion dolls, therefore, were essential for young girls not just for fun, but also for survival. Trixie even points out how Barbie-Q’s apron has a pocket, and Ken comes with a small hot dog, leaving little to the imagination. Moreover, Ken’s apron reading ‘Chow Time…Come and Get it” has clear sexual connotations, leading Trixie, rolling her eyes, to say, “Mama…” The other dolls in this decade, such as Suburban Shopper (1962) and Fashion Queen Barbie (1962) also support this domesticated, superficial model of womanhood.

The tasks of the perfect mother and wife, doing the groceries and looking attractive, are overtly forced. Even Barbie’s career is limited to this maternal expectation, evidenced by the Registered Nurse Barbie (1961). The only job available to Barbie is a caregiving one, playing upon the tender, affectionate stereotype of femininity, and highlighting the familial pressures upon women in the 1960s. However, the 1970s is when the women’s liberation movement surged.

Second-wave feminism aimed for moral and social equality of the sexes, as well as political reform. We can see the gradual social empowerment of women by analysing the most iconic fashion doll, Malibu Barbie (1971). As opposed to the dolls from the 1960s, where the dolls’ eyes were demurely looking away, and their dainty features were made up perfectly, Malibu Barbie is quite different. Her eyes are looking straight ahead, no longer passive, but knows what she wants.

A much more natural face, with less makeup, coupled with orange-tanned skin that implies her time is spent on the beach as opposed to the home, providing girls with a more free-spirited, autonomous role model. This can be further evidenced by the Steffie dolls, Barbie’s friend. The 1972 release of Busy Talking Steffie, who says ‘I dig having my own TV!’ and ‘I’m having dinner with Barbie’, depicts women as dynamic consumers with their own lives, as opposed to the domesticated, objectifying dolls from the previous decade.

Further, Busy Walking Steffie (1972) epitomises the physical independence that the women’s liberation movement strived for. Steffie’s head and arms being able to move embodies women being more active members of society in this period. The following decades, the 1980s and 1990s, reveal fashion dolls becoming more interactive, as opposed to just beautiful objects. The Western Barbie (1980) doll being in trousers, is symbolic of the material manifestation of women’s liberation from restrictive social pressures.

The careers of dolls in this period are also reflective of this. Astronaut Barbie (1985) who can ‘Explore new worlds!’ may have inspired girls to be more creative in their career choices, as women were now beginning to have what felt like a whole new world of career choices.

Commenting on her amazement at this doll, Trixie says “if I would have got this as a child, I would have sh*t.”

Additionally, the rise of aerobic fitness-inspired dolls, such as Great Shape Barbie (1983) and Workin’ Out Barbie (1996) further propagate an active image of women, although this does come alongside a potentially damaging message of over-exercising to prevent weight gain. Barbie’s unrealistic body proportions could have influenced children negatively during these decades but, as discussed later, Mattel did change these impossible proportions.

At the same time, we can see a rise in fashion dolls that came with more accessories, to represent the busier lives of women that didn’t just revolve around the home. Day to Night Barbie (1985) represents this well, as her first outfit comes with clothes like a blazer and shirt, suitable for the corporate sphere that was becoming more open to women. She comes with a briefcase that includes a calculator, a credit card, and a magazine that says ‘Business’ on it.

These accessories, which might seem suited to Ken are now given to Barbie, evidencing the growing financial autonomy of women, and their ability pursuing more traditionally masculine careers. Also, this doll is two-in-one, as she comes with a dress that has a sparkly bodice and hot pink skirt, perfect for a night out. This doll showcases multiple facets of femininity, working girl and party girl, a more progressive example to young girls than the decades prior.

These interchangeable outfits and increased interactivity are also the case for Barbie and the All Stars (1989) – an aerobics star whose duffel bags turn into outfits, Western Stompin’ Barbie (1993) – whose spurs on her cowboy boots double as a glitter stamp, due to the rise in love for stationary, and Caboodles Barbie (1993) – who came with play makeup and fragrance for the child to use. The rise in the interactivity of these dolls aptly represents a wider range of femininity, that doesn’t just solely focus on outward appearance.

By accounting for the more busy lives of women, and the different career choices now available to them, these dolls imply a more empowered version of womanhood. Furthermore, it is fascinating to track the progression of Trixie’s favourite African American Barbie dolls during these decades. We begin with Black Francie (1967), one of the most valuable collector’s items on the market.

There were very few African American dolls made, and it is clear to see that Black Francie has the same face mould as the white Francie doll, but with different skin tone poured in. It is interesting to consider whether this is due to poor technology, or whether an aesthetic standard is being cultivated here. The eurocentric beauty that this doll has, with small features and long, straight, brunette hair, is devoid of many African American features that aren’t solely their deeper complexion.

Comparably, Live Action Christie (1971-75), a doll who represents the hippie movement, is also held to these unrealistic standards. Her dark skin is offset by orange eyes, beautiful but not realistic, and her body has the same proportions and mould as Barbie. In the following decade, however, we start to see some changes. Black Barbie (1980) is not just Barbie’s friend or sidekick, like Francie or Christie, but Barbie is actually a black woman.

The large afro pays homage to African American characteristics better than the straight hair of the other dolls, although this is rather reductive. Black Barbie’s beautiful African-inspired gold, detailed necklace is a huge step in a better direction for representation. These problematic representations of womanhood, and African Americans, led Mattel to be criticised, as the negative influences on young children were profound.

Playing with dolls is where children can learn many social skills, and since they’ll be spending hours with their toys, these dolls must teach them about society in a progressive, healthy manner. In Trixie’s video ‘Trixie Unboxes: Mattel Creatable World Dolls,’ she reveals some newly released toys. The dolls in this collection are more androgynous, gender fluid body types that come with multiple wigs and multiple outfits which aren’t gendered in a binary manner, like Barbie and Ken.

Individual details are more developed, and the black doll comes with a micro braid wig, showing higher quality representation than ever before. Trixie Mattel even owns a wheelchair Barbie doll, which she notes is so important for “starting conversations” with children about different types of people, and different abilities.

Similarly, having conversations about the damaging depictions of femininity, and reductive portrayal of African American bodies, in the past, as epitomised by Barbie dolls, can also be useful to engage in necessary discourse about how far we’ve come, and how far we have to go.