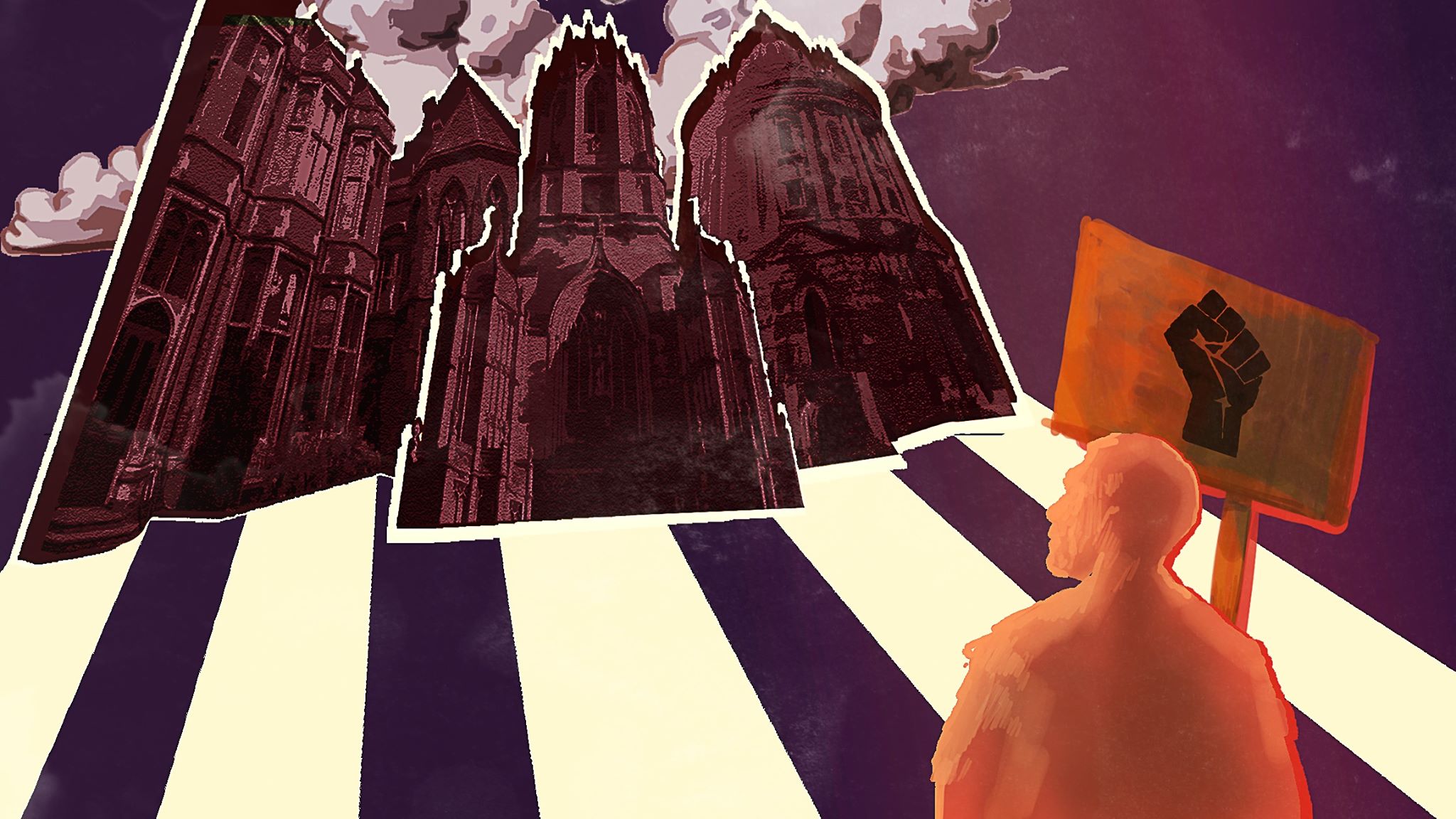 Oxford University was rocked by a series of race scandals last week, amidst heightened discussion around race around the world, sparked by the killing of George Floyd in Minneapolis.

The Oxford Student has collected evidence and testimony from a variety of sources, to understand a week which many students believe has shown systemic racism continues to be a problem at the university.

Unknown to most at the time, on Sunday 31st May, a member of Christ Church JCR, running for the ‘cake rep’ position, a role that entails providing a cake for each member of the JCR, made a joke arguing that ‘flour shortages’ were the cause of racism, and a comparable trouble to the death of George Floyd. The Oxford Student understands that more than one student was involved in the joke, with one student allegedly writing the speech for the cake rep candidate to recite.

At the time, minutes from the meeting show that a black student, Melanie Onovo, asked “what all candidates have to say about flour shortages being compared to George Floyd.” The candidate involved repeated the essence of the statement, whilst statements at the time from other candidates were relatively brief, with one giving no comment and the other saying all they had to say was that the joke was ‘too soon’. A comment given later in written form by a fourth candidate who could not attend at the time condemned the “horrific tragedy” of the death of George Floyd, whilst stating “As for the lack of flour, no one will die from waiting for a Victoria Sponge Cake.”

Despite other members of the JCR wishing to express their opposition to the comments of the cake rep candidate, the former Returning officer stated it was “not appropriate” to “make a point or statement at the end of the hustings” or make “political points” in husts, instead advocating the usage of the JCR page or Facebook.

The JCR President made clear his intention at the end of the meeting to “treat the incident privately, to make clear that this behaviour is misguided”, whilst condemning the candidate’s “repugnant joke” in light of the “travesty of American police brutality”.

The next day, on Monday, Officers of the ‘Elevate’ slate planning to run in the Union’s elections (i.e. those running for President, Librarian, Treasurer and Secretary), were made aware of disturbing messages sent by a member of their slate, according to testimony by the Elevate slate’s former Librarian candidate in the Union’s Access Committee meeting, held on Friday 5th June.

According to said testimony, made available to The Oxford Student,upon viewing the content of the messages, which referenced the George Floyd protests whilst telling members of the union to register to vote in its upcoming elections, officers of the slate condemned the remarks, and decided a swift apology was needed from the original candidate who sent the message to all people they had sent it to.

The Librarian candidate for the Elevate slate, Olly Boyland, later stated that the officers “created a template which we instructed every member of the slate to use for messaging, obviously this was not followed by [the candidate]”.

He went on to tell The Oxford Student that worse than the candidate’s refusal to adhere to the template “was her subsequent refusal to offer an adequate apology and her unwillingness to acknowledge how hurtful and damaging the messages were. However, it was an error of judgement to spend our time trying to reason with her. We should instead have dropped her from the slate as soon as we became aware of the messages, which is why I dropped out of the election on Wednesday.

“I have tried to be as open and transparent with what happened, including fully explaining the relevant events to Access Committee on Friday. Further, I offered an apology to the committee for not dealing with the situation swiftly or firmly enough, and for the pain caused by that.”

The next day, on Tuesday, according to Boyland, the officers of the slate were made aware that Onovo, a former Treasurer for the Union, was aware of the messages sent by the candidate, as well as her demands that the candidate give a public apology or she would go public with her grievances. According to Boyland, at this point the officers of the slate knew this was a “very serious situation”.

The candidate created a draft apology on Tuesday, that was deemed insufficient by both Onovo and the members of the Elevate slate; the Presidential candidate for the slate, Harry Deacon, was then reportedly up throughout the night on Wednesday morning attempting to craft a second apology and make the candidate “aware” that what they had done was wrong.

After this, Officers of the Elevate slate decide to drop out of the race that day.

A Black Lives Matter rally was also held in Oxford, at South Parks on the evening of Wednesday 3rd June.

The start of Thursday 4th June saw the heads of Oxford Colleges publish an open letter in The Guardian, saying they stand with students in fighting against racism. One of the signatories of the letter, Ken Macdonald, the Warden for Wadham, said in an email to students he only did so “reluctantly, I have to confess, because I fear that words come cheap”.

Early in the morning of Thursday 4th June, HuffPost UK published a report stating that Oxford University had delayed the release of admissions data due to “world events”, based on leaked internal emails. This spawned backlash and an email template being created which criticised a spokesperson from the university arguing releasing the statistics would lead to them being “buried by all the other news this week”.

A statement later released by the university stated that “it felt deeply inappropriate to publish content that could distract from the important challenges and debate facing our society at this time and try to draw attention to our own progress on the figures” – implying the university was actually afraid of attempting to distract from the anti-racist debate by publishing its progress in increasing diversity.

Throughout the day, motions across the university began to be tabled in JCRs condemning the actions at Christ Church. Most focused on condemning the comments at the husts, and subsequent abuse of Onovo, as well as the actions of the JCR President for, in the words of multiple motions, an “abuse” of his power by trying to discourage other JCR Presidents from bringing the motions to their JCRs. They also condemned the Returning Officer for not challenging the comments further when they were made.

Finally, outrage was directed at the Christ Church censors (essentially college deans) in many motions as well as an open letter released on Thursday, for oppressive measures taken against Onovo upon her deciding to take the matter public. One of the original creators of a petition protesting the handling of the Christ Church affair, Adi Kesaia Toganivalu, told The Oxford Student:

“I believe the Christ Church censors failed in their duty of care to Melanie Onovo. They did not provide welfare resources in the immediate aftermath. Instead they called her and asked her for the “rationale” going public and accused her of bullying another student.

“In prioritising damage control they made her culpable, rather than support her. They had the audacity to ask her for her opinion in their public statement. This was not her job. In a college-wide email they alluded to taking legal action against her. Two other students wrote an email to the censors, expressing our disgust at their failings. We are yet to hear a response.”

Christ Church’s JCR President, Jarnail Atwal, told The Oxford Student: “I am not afraid to defend the integrity and decency of the censors with whom I have worked closely over a year. I am staggered at how quickly disinformation has spread”.

A Christ Church JCR member told The Oxford Student the questioning of Onovo’s “rationale” was an attempt to compile an understanding of the series of events, that the implication it was dismissive of her concerns was a “mischaracterisation” and that it was meant to take into account the “welfare” of the former Returning Officer.

The former Christ Church Returning Officer resigned on Thursday, with an email sent to Christ Church JCR emphasising that “it is clear that procedure should not trump the addressing of racial injustices”. The former Returning Officer told The Oxford Student: “I resigned for a number of reasons. Firstly because I was asked to by the JCR committee, although I feel they didn’t make explicitly clear to me why they had asked me to resign. Secondly, I thought that I had become a distraction from the election itself, and didn’t want to take any attention away from the candidates.

“Thirdly, over the last week, responding to the aftermath of hustings was making me unable to revise for my exams. I have since apologised to the members of the JCR for making a mistake in my judgment during hustings. Having resigned, I feel more comfortable commenting on the candidates who stood in the election and I was shocked and disgusted by the remarks made.

“However, I do feel that it’s unfortunate that the amount of attention I have received has at times been a distraction from the greater issue of a reprehensible racist comment being made. I was disappointed to learn that other college JCRs had called for my resignation before they had been made fully aware of all of the facts surrounding this scandal.”

The next day, on Friday 5th, the Oxford ACS published an open letter to the University addressing the events of the past day, calling for much more action from the university to address anti-black racism, and systemic bias. On the same day, the Oxford Union Access Committee, met to discuss the week’s events. The former Union Librarian, Harry Deacon, apologised multiple times for his handling of the controversy surrounding the Union messages, including not dropping the candidate who sent the messages from the slate earlier.

Despite stating in the meeting that he was not planning to resign, saying he wanted to make sure a similar scandal could never happen again, he later reversed this decision, resigning on Saturday, telling The Oxford Student: “I believe that leadership positions bring with them significant responsibility and I thought it appropriate not only to withdraw from the election but on reflection, to resign from my position as Librarian of the Union.”

It’s clear that many black Oxford Students still feel personally that Oxford has a problem with race. Oxford has had a series of race-related scandals before this, from the dragging out of a blind black man from the Oxford Union chamber, to the continued presence of a statue of Cecil Rhodes outside of Oriel, to the turning down of a scholarship for black students from rapper Stormzy. In light of the events of last week, and protests and demonstrations across the globe, it seems Oxford itself is still mired in questions surrounding how committed its institutions and students are to the continued welfare and safety of black people.