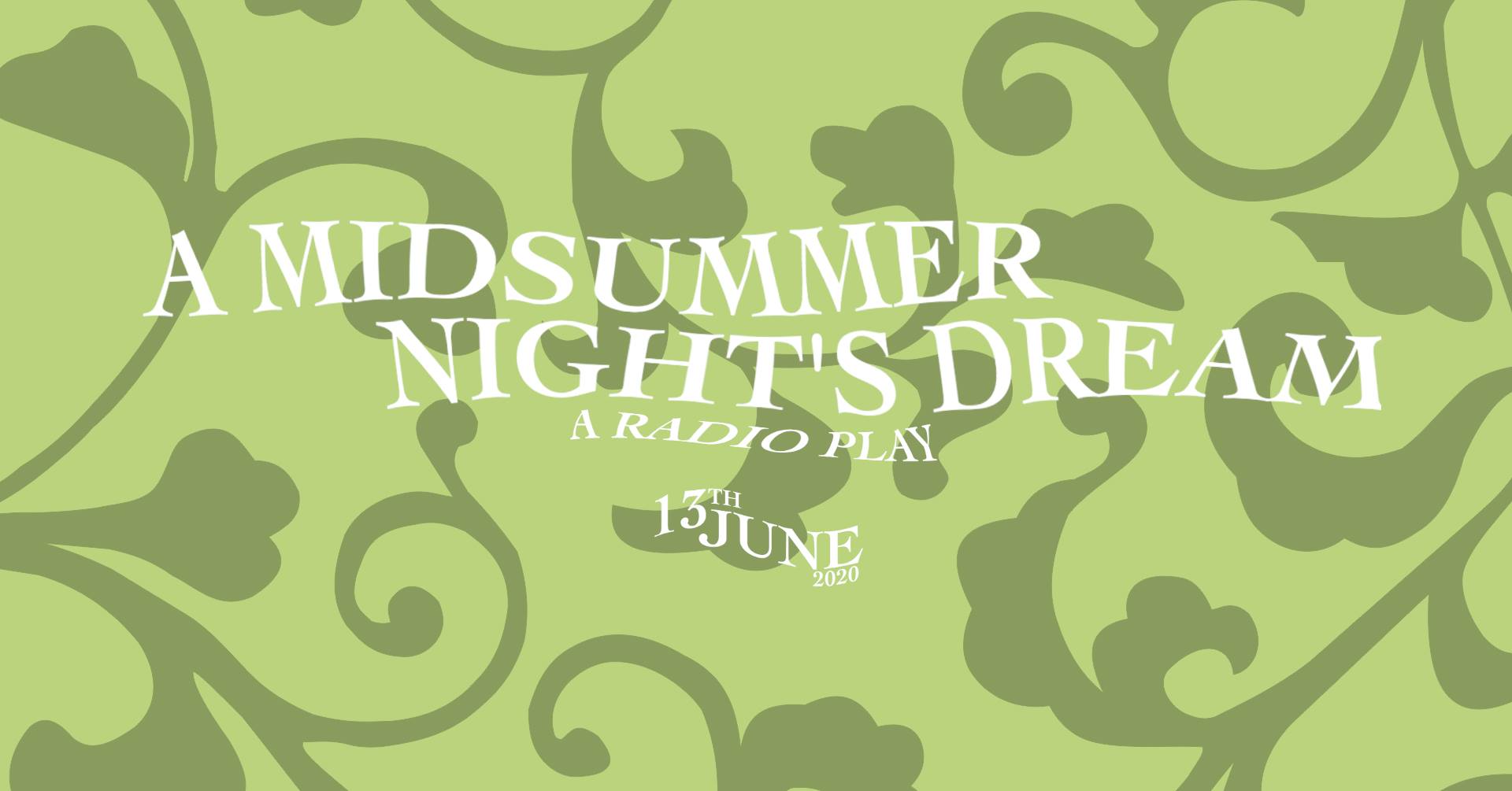 Normally, we’d expect to enter Shakespeare’s world of fairies and mischief in a very different way than through a radio play: perhaps standing around the Globe stage, or sitting in the rows of a college’s theatre. But strange times call for new formats for student drama to get to us. I previewed Act 2, Scene 1 of Jazz Hands Productions’ radio play: A Midsummer Night’s Dream, ahead of its release on Saturday of 7th Week. The production is also fundraising for the mental health charity Mind. In addition to previewing a scene, I also had the opportunity to ask the cast and crew behind it some questions about creating the production.

Act 2, Scene 1 of A Midsummer Night’s Dream is a series of conversations between pairs of characters. The audio-only form means that the listener’s attention is really drawn to the content of the dialogue itself. Without a physical representation of the characters,  the tone of these exchanges and how they contrast with one another is brought to the forefront: going from the light-hearted conversation between the fairy and Puck, to the jealous confrontation between Titania and Oberon, and the unrequited love of Helena for Demetrius.

The audio form means that the listener’s attention is really drawn to the content of the dialogue itself.

The cast have done a very good job of capturing the mischief and the humour of this scene – particularly with the character of Puck – and also with shifting between the more serious moments and the comedic ones. The audio is accompanied by music, which in combination with the performances from the cast, helps to build a sense of the fantastical setting even without a visual representation of what is happening. Shakespeare’s dialogue is brought to life by the emotion and expressiveness invested into it by this talented cast. A lot of effort and time has clearly gone into this production despite the difficult circumstances, and from the preview scene, it seems to have paid off.

Shakespeare’s dialogue is brought to life by the emotion and expressiveness invested into it by this talented cast.

Considering the unconventional form that this production has taken and in light of the current global situation, I was also interested to find out from the people behind the production what it had been like to create:

How does it feel creating a radio play in the midst of a global pandemic? Are you able to devote the same attention to it or are there more challenges ‘prioritising’?

Ana Pagu (Producer): “Creating a radio play during a pandemic acts as an escape from what is going on in the world at the moment. This is also why we chose A Midsummer Night’s Dream – it’s an uplifting comedy, very silly and escapist. It’s providing a creative outlet for everyone involved in it, both cast and crew, and we hope it will have the same effect on our audience.”

Why did you choose to do a fundraiser for Mind?

Felix Westcott (Director): “It’s an incredibly tough time for so many people for so many reasons but I think one most of us share (more than we realise) is the issue of mental health during this crisis. There have always been very strong links between theatre and exploring or supporting mental health issues and I think this play continues that by allowing us to escape into a magical world for a bit.”

How have you prepared for these roles & how is it different from your usual experiences of student drama?

Maya Robinson (Quince): “Firstly, there’s the perk of not having to learn lines so it’s much easier to prepare in that respect. I’ve read through and practised my lines in different ways based on different characterisations to find what works. For me, it’s been a pretty collaborative process with the other people I’m in scenes with and the director, Felix (over zoom of course). I’m not hugely familiar with Shakespeare so it’s been very helpful to hear other people’s interpretations of the text and incorporating that into my performance. I play Quince, so I’ve been trying to find a balance between a tortured director and a clueless fool.”

How is being in a radio play produced remotely different from rehearsing a stage play in real life? Which one do you prefer? Are there any specific challenges you have faced?

Darcy Dixon (Titania): “I guess in some ways I prefer radio plays because I think solely about my words. Body language is important and I’m still kind of acting out with my body as I speak, but not having to think about blocking and other stuff whilst also having to read Shakespeare is quite useful. Specific challenges are just Zoom and WiFi technicalities or my laptop camera breaking and the rest not being able to see my face, or even just the fact that I live in London and it can be very loud. But apart from that, it was absolutely fine and we’ve had a really great producer and director who made it incredibly enjoyable!”

(The event page for the production can be found here.)