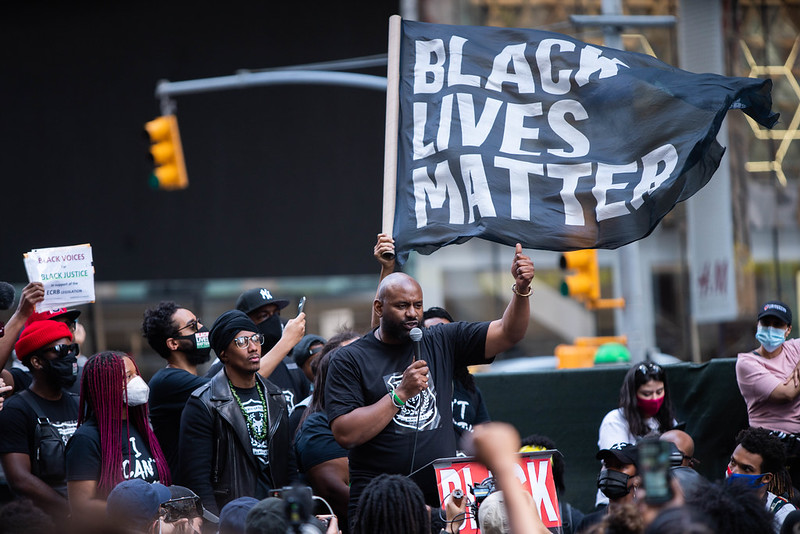 As Black Lives Matter protests continue to rock the foundations of racist institutions all over the world, protestors are following in the footsteps of Civil Rights activists by once again using the music of black artists as their rallying cry. From copies of Billie Holiday’s ‘Strange Fruit’ being mailed to senators in advance of an anti-lynching bill, to copies of George Floyd’s freestyle track being given to protestors in Houston, Texas, black music has been a vital tool for exposing and challenging racism.

From copies of Billie Holiday’s ‘Strange Fruit’ being mailed to senators in advance of an anti-lynching bill, to copies of George Floyd’s freestyle track being given to protestors in Huston, Texas, black music has been a vital tool for exposing and challenging racism.

In New York City, as well as in other cities in America, police attempting to control the movement of marches are using a technique called ‘Kettling’. This consists of policemen and women creating a wall of armoured bodies that is impassable by protestors. These walls are strategically created on all sides of the marchers in order to box them in, restricting their movement and, in some cases, making it easier to administer violent, suppressive force. One instance of Kettling caught on film and posted to Twitter shows the trapped protesters chanting the iconic chorus of Ludacris’ 2001 Hip Hop classic ‘Move Bitch’. The video is an example of the people’s refusal to be silenced in the face of an overwhelmingly violent police response.

Demonstrations in Auckland, New Zealand have a more hopeful atmosphere. Protesters have been filmed dancing to Kendrick Lamar’s ‘Alright’. Lamar’s 2015 Album To Pimp a Butterfly is an award winning exploration of racial discrimination in the United States. Songs like ‘Alright’, with lyrics like ‘And we hate po-po, Wanna kill us dead in the street for sure’, strike a deep chord now more than ever. Despite the song’s frank tone lyrically, it manages to be extremely motivating and impossible not to move to, a powerful combination in a protest song. Huge credit goes to Pharrell Williams and Sounwave on production.  The track’s main hook ‘We gon’ be alright’ expresses the resilience of America’s black community in the face of hundreds of years of discrimination, slavery and state sanctioned murder.

The track’s main hook ‘We gon’ be alright’ expresses the resilience of America’s black community in the face of hundreds of years of discrimination, slavery and state sanctioned murder.

In addition to motivating action, iconic Hip Hop is also actively being used as a tool for retaliation. On May 30th, notorious hacker collective Anonymous resurfaced to voice its solidarity with Black Lives Matter protesters. The group posted on Twitter expressing their allegiance with the movement, signing their post off with “how can anyone expect the people to restrain themselves? People are done being brutalised and murdered”. Moments later, N.W.A’s ‘Fuck tha Police’ could be heard in police cars all over Chicago. Anonymous had hacked into their scanners, rigging them to play N.W.A’s anti-establishment anthem. The song highlights police brutality and racial profiling that, unfortunately, hasn’t ceased since its release in 1988.

Influence on Modern day protest songs can be traced back to the songs of the segregation era and earlier, and Billy Holiday’s ‘Strange Fruit’ is still one of the most recognisable among them. I first encountered the song in a GCSE drama class, where my teacher projected the horrific photograph taken at the lynching of Thomas Shipp and Abram Smith, backed up by Holiday’s haunting record. The class sat in silence for a difficult three minutes that I am very thankful to that teacher for. Holiday first performed the song in 1939 at the end of her show at Café Society, New York’s first racially integrated night club. Barney Josephson, the club’s owner, was so nervous about the song causing violence and unrest that he insisted Holiday perform the song last and that she would not be permitted an encore. But the song was seized upon by the civil rights activists of the time and copies of it were sent to senators prior to their vote on anti-lynching legislation. Unfortunately the legislation did not pass. Anybody interested in the history behind the song and its place in the civil rights movement should read David Margolick’s book Strange Fruit: The Biography of a Song.

Astonishingly, congress had not passed any legislation on lynching until 2018. The law was revised this year, being renamed the Emmet Till Anti-Lynching Act in honour of the 14 year old black child who was lynched in 1955 after allegedly offending a white woman in a grocery store in Money, Mississippi. The allegation was later discredited when his accuser, Carolyn Bryant, admitted to falsifying the claim that Till made physical advances on her. The 2020 revision passed despite 4 representatives voting against it. One of the representatives in opposition, Thomas Massie of Kentucky, opposed the bill, which aims to designate as a hate crime the kidnapping and hanging of black people without any trial or legal defence, because “adding enhanced penalties for ‘hate’ tends to endanger other liberties such as freedom of speech.” The absurdity of American law making knows no bounds.

Many people, at least many white people, will be familiar with ‘Strange Fruit’ through Kanye West’s sampling of Nina Simone’s cover in his song ‘Blood on the leaves’, off the album ‘Yeezus’. Nina Simone’s cover is debatably the more definitive version of the track, with Simone adding heaps of emotion in her delivery, as she typically does. Simone also has a sizable discography of protest songs, including ‘Mississippi Goddamn’. That song was recorded during one of Simone’s live performances and her anger and frustration is palpable in the speed she hammers the keys of her piano. Of all the songs mentioned in this article ‘Mississippi Goddamn’ is the one most explicitly concerned with activism, protest, and achieving real, lasting change. It is a fantastic performance that perfectly captures the emotion involved in a war for racial justice that has been raging for hundreds of years now.

Of all the songs mentioned in this article ‘Mississippi Goddamn’ is the one most explicitly concerned with activism, protest, and achieving real, lasting change. It is a fantastic performance that perfectly captures the emotion involved in a war for racial justice that has been raging for hundreds of years now.

Black musicians are, and have been, consistently pioneering in the music industry. Imagine the potential that could finally be achieved if these communities were not forced to fear state violence on a daily basis. Whilst musicians like Billie Holiday and Nina Simone have performed some of the most powerful and true lyrics in history, they would certainly be disgusted that these words are still relevant in the hearts of people today.