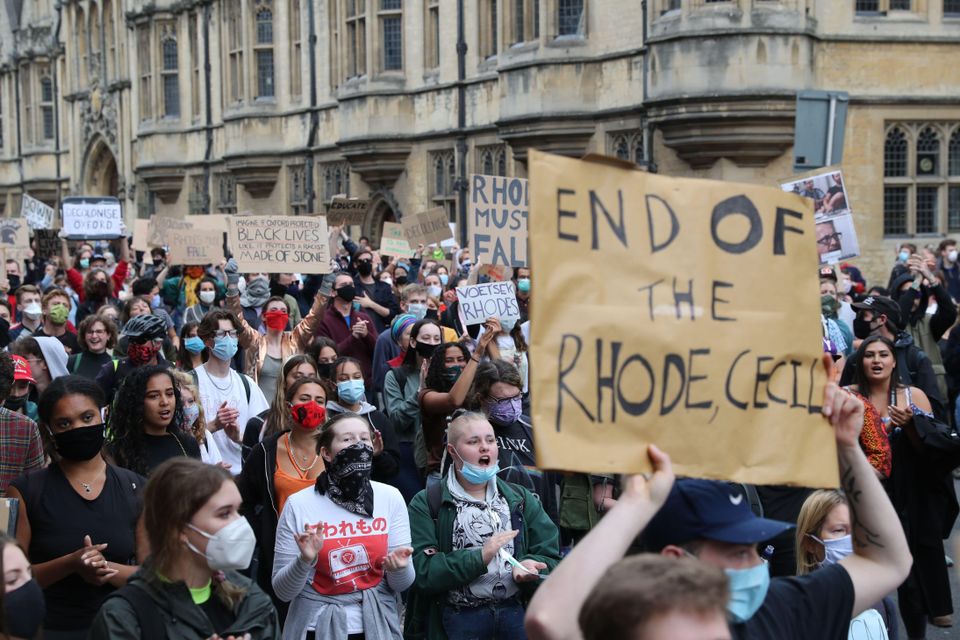 Alamy Live News. 2BY8YAE People during a protest calling for the removal of the statue of 19th century imperialist, politician Cecil Rhodes from an Oxford college which has reignited amid anti-racism demonstrations. This is an Alamy Live News image and may not be part of your current Alamy deal . If you are unsure, please contact our sales team to check.
News
·12th June 2020

Members of Oriel MCR committee, including the President, have been accused of seeking to undermine students’ attempts to have college remove the statue of Cecil Rhodes from its position above Oriel’s Queen Street entrance.

Neil Misra and Swaraj Dash, two members of Oriel Middle Common Room (MCR), proposed a motion calling for a referendum on the MCR’s official support for the statue’s removal. The MCR Committee reportedly refused to call a referendum on this issue, and despite later reversing this decision, a referendum is yet to take place.

The President and other members of Committee were later seen on a group chat where plans were made to counterbalance the results of any referendum through a campaign of writing letters to the college’s Provost. Content of the letters proposed included lines such as:

“I have gained much from interacting with people who are from very different backgrounds, races…perhaps as much as I have gained through academic rigour and development. The RMF [Rhodes Must Fall] movement has repeatedly attempted to shatter that community, mostly from the outside.”

The same drafted letter describes Rhodes as an ‘Orielensis’, who “believed in Oriel as a force for good in the world which would triumph over racial and international boundaries”. The Provost addressed is also invited to consider if Rhodes’ “legacy for positive action” should be “allowed to be forgotten at best and at worst written into a narrative of oppression and tyranny that is ahistorical and illogical”.

The remarks made in this group chat, as well as the apparent intention of some members to subvert potential decisions made by the MCR as a body, has provoked outrage and upset in the college. One member, who wished to remain anonymous, told The Oxford Student that he is  “shocked and appalled”.

“I am shocked and appalled that the Oriel MCR President and other members of the MCR executive committee were involved in a group chat that sought to specifically undermine the democratic processes of the MCR. It is outrageous that a minority of MCR members would conspire to subvert the democratic will of the rest of the MCR community, especially on an issue as significant as the removal of the Rhodes statue.

“It is worth noting that the executive committee initially resisted calls for a referendum, and only relented after overwhelming pressure from the MCR membership – their resistance to the referendum is less surprising following the revelation of the existence of the group chat. Furthermore, many in the MCR (including myself) find the insensitive views expressed within the chat sickening and extremely distressing.

“The messages shared between the members of the chat betray a complete disregard for the PoC students of Oriel College and the university. The whole ordeal has caused myself and other members of the MCR to lose confidence in the Committee.”

However, the MCR’s President has stated today that neither she nor members of her Committee were involved in the alleged attempt to undermine the referendum. In her statement, she said:

“Oriel MCR condemns in the strongest possible terms any efforts to subvert the democratic processes of the Oriel MCR. Some members of the Executive Committee were added to a Facebook group chat without their knowledge or consent and did not participate in any of the discussions.

“The group chat was shut down quickly and the matter is being investigated. Oriel MCR is committed to upholding the values of democracy in the MCR, being an inclusive and welcoming space to all its members, and fighting racism and racial injustice in all its forms.”

Oriel’s Senior Dean declined to comment on the ongoing investigation into the group chat and its contents, but reinstated the college’s stance on the Rhodes Must Fall campaign in his correspondence with The Oxford Student:

“As an academic institution, the College is firmly committed to freedom of speech. It encourages debate within our community that is respectful and sensitive to the feelings of all concerned. As the College stated on Tuesday, we abhor racism and discrimination in all its forms and we will take seriously any accusation of harassment or racism. Any Oriel student who feels that they have been harassed should seek the support of the College.”

The motion proposed by Misra and Dash comes alongside a large Rhodes Must Fall protest on Tuesday. The movement’s Oxford branch was first led in 2016 by Ntokozo Qwabe and other students, and has seen a revival in the city since a statue of slave trader Edward Colston was thrown into Bristol’s harbour on Sunday.

Many students have expressed their support for the removal of the Cecil Rhodes statue – Oriel’s JCR has successfully passed a motion today demanding that the college take it down, with a majority of 125 votes to 26. However, an article released by The Guardian has shown that some staff at Oriel sought legal protections from protests for a plaque commemorating Rhodes – an unnamed senior official has even been quoted as saying that Cecil Rhodes should be considered “one of the greatest educational philanthropists of modern times”.

Oxford city council has invited Oriel to apply for planning permission to have Rhodes’ likeness taken down, with its leader, Councillor Susan Brown, stating that she was “keen to work with Oriel to help them find the right balance between the laws that protect our historic buildings and the moral obligation to reflect on the malign symbolism of this statue”.

An early version of this article misattributed statements made in the group chat to the President, this has been updated.