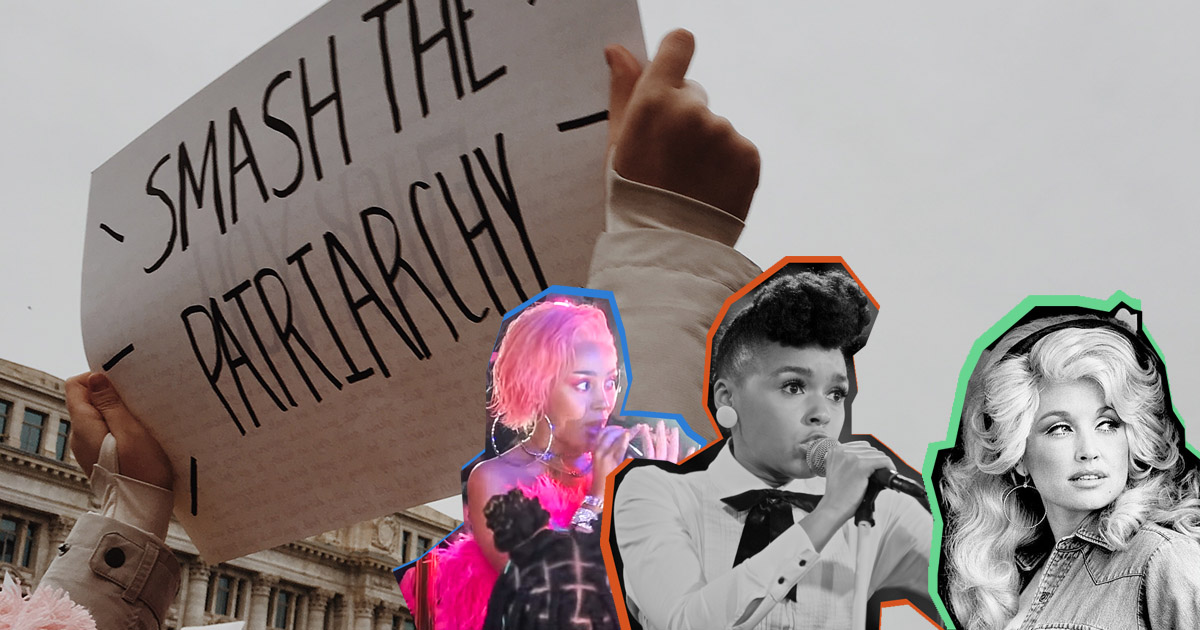 As lockdown eases, and we begin to emerge into the big bad world (if only for a rendezvous with our ‘support bubble’), we will once again be met by the harsh realities of wearing a bra, the desire to look presentable, and the fear of that tampon you’ve got stashed up your sleeve falling out in the middle of Tesco.

Also, I’ve heard it said that there’s no time like a pandemic to broaden your musical horizons… Well, I’m jumping on that bandwagon before it’s too late and sharing with you my Playlist for When the Patriarchy Gets You Down – or any other time you like really.

Opening with the line, ‘Eve, you wicked woman, you done put your curse on me’, PMS Blues is a fascinating insight into just how different Jolene might have sounded had it been composed at a slightly different time of the month. In this absolute banger, one imagines Dolly feels the need to pour herself a cup of something a little stronger than ambition, as we are treated to the harrowing repetition of ‘suffering, suffering, suffering, everybody’s suffering, huh?’. Indeed, it’s exactly ‘like the devil taking over’. Dolly is ‘rantin, ravin’, misbehavin’ but, make no mistake, this song contains no apology. It is, quite simply, a warning: these are the ‘God almighty, slap somebody, PMS blues’ after all, and even a ‘pitbull ain’t no match’.

Back in 2014, well before the release of Lemonade, Beyoncé Knowles was teaching us to make the most of the yonic lemons Mother Nature gave us. While we may suffer under the dark cloud of Dolly’s PMS Blues, Blow reminds us of the silver lining that comes with this (often literally) bloody business of having a body. A sensitive reader will uncover extended metaphors that would put even the likes of Marcel Proust to shame: ‘Can you eat my skittles? It’s the sweetest in the middle – pink is the flavour’. But it doesn’t take much close-reading to ‘solve the riddle’ and uncover that this song is all about the wonders of vulva-centric sex. A suitably vague, unapologetically random, but nevertheless spicy, hint of French (‘Je ne sais quoi, Cherie’) seals the deal on Beyoncé’s altogether raunchier take on the body than Dolly’s. This song is all fun, confidence, and self-possession – three ingredients I’d throw into my lemonade any day.

It’s two for the price of one with these tunes. Period Sex is the sexual health lesson we all wish our PSE teacher was brazen enough to deliver. Though difficult to imagine pashmina-wearing Ms Williams (or your school’s equivalent) ever uttering the words, ‘If you’re grossed out [just] pretend it’s cherry lube’, you can’t deny you might have been grateful for the advice to simply ‘Put down a towel, party ’til it’s dry’.

In I Gave You A UTI, Bloom is out to de-stigmatise and myth-bust her way to gender equality. Having Fontana sing, ‘I’m so good at sex, your maiden ship got wrecked – my penis is the reason you may die, die, die’ only to be met by her cool and calm rebuttal: ‘Okay, so it’s not really commenting on the quality of the sex, as much as a lot of sex has been happening and there’s just a very natural transfer of bacteria…’

You’ll laugh, you’ll learn and you’ll leave knowing that for Bloom, knowledge is sexual power. As she declares triumphantly in Period Sex: ‘You don’t get to say “let me just put it in your butt!”’

As my philosophy of religion tutor will inform you, there is by definition, no more perfect being than God. Thus, what higher compliment could one’s vulva possibly be paid than to be made the subject of direct metaphorical comparison to such an all-loving, omnipotent entity? Best not to dwell on the applicability of the ‘omnipresent’ or ‘all-knowing’ properties…

Indeed, King Princess has so much admiration for this particular pussy, she confesses she’s ‘been prayin’ for hours…’. But the deification doesn’t stop there. Such is the strength of her muse’s divine energy, KP’s morality is positively affected: ‘I’ve never been good at this nice shit, but I can try if you like it.’ If that’s not Powerful Vagina Energy, I don’t know what is.

Despite titular appearances, Go To Town is not the anthem of a Covid-denial group rebelling against BoJo’s public health slogan. If anything, Doja Cat’s sexual empowerment number does much more for the ‘Stay At Home’ campaign than a government PSA ever could.

The joyous melody of this song provides the backdrop to an explosive critique of the orgasm gap (‘Full of shit, if he don’t eat it he a D-bag’) with softer moments reminding us that sexual fulfilment starts with self-love: ‘Ain’t no man between my thighs all the time, yeah, I do my DIYs.’ Rapping, ‘Bitch I’m telling you, this shit edible’, Doja proves she’s not one to beat around the bush as she encourages us to take the leap of faith required to say those three little words on everyone’s mind – those words being, of course, ‘kiss my genital’.

‘There are communists in the summer house’. Need I say more?

On the first listen, you could be forgiven for thinking Monáe was just one of those rare 21st-century women still bound to a binary notion of gender, but once you’ve noticed the subversive ‘y’ funking up the title, you can’t un-see that Monaé’s song is one of gentle and hypnotic provocation, softly dismantling collective body shame.

Though you’ll hear the word ‘pink’ so many times you’ll be left pondering the arbitrariness of linguistic convention, the music video is what lingers in the mind. As Monáe sings, ‘Pink beyond forest and thighs’ she displays a line of white briefs, with pink (of course) text displayed across them reading ‘Sex Cells’ and ‘I Grab Back’. These pants come in an answer to the inevitable question, if you’re wearing vulva-trousers on top (see image attached) what on Earth are you wearing underneath?