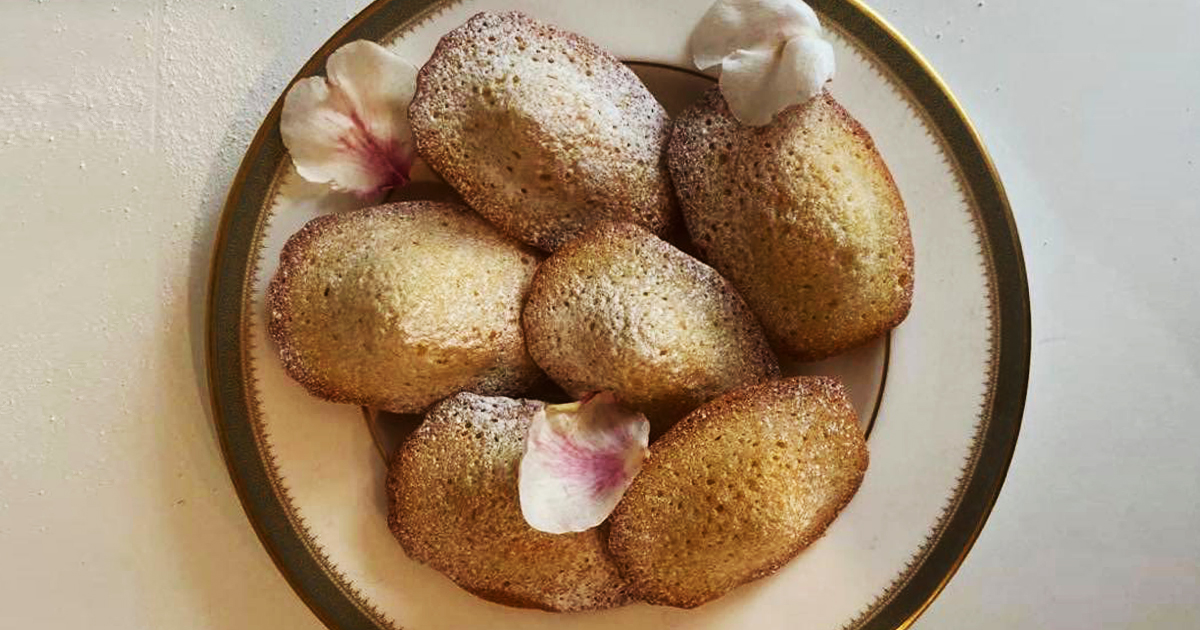 “She sent out for one of those short, plump little cakes called ‘petites madeleines,’ which look as though they had been moulded in the fluted scallop of a pilgrim’s shell. And soon, mechanically, weary after a dull day with the prospect of a depressing morrow, I raised to my lips a spoonful of the tea in which I had soaked a morsel of the cake. No sooner had the warm liquid, and the crumbs with it, touched my palate, a shudder ran through my whole body, and I stopped, intent upon the extraordinary changes that were taking place. An exquisite pleasure had invaded my senses, but individual, detached, with no suggestion of its origin. And at once the vicissitudes of life had become indifferent to me, its disasters innocuous, its brevity illusory–this new sensation having had on me the effect which love has of filling me with a precious essence; or rather this essence was not in me, it was myself…. I put down the cup and examine my own mind.”

These hypnotic lines from Swann’s Way (or, Du côté de chez Swann as it is in the original) – the first volume of Proust’s seven-part novel, In Search of Lost Time – are instantly recognisable to any French student and were music to my frazzled first-year self’s ears. Finally, food (and what’s more, CAKE) taking centre stage in literature as it does in life, or in mine at least, that is!

I’m pleased, if rather jealous to hear that Marie NDiaye’s novel, La Cheffe, has made its way onto the Prelims French reading list, for these few lines above were the closest I came to bridging the gap between my foodie fanaticism and my degree.

Proust’s description of dipping a madeleine into lime blossom tea is more than just a passing moment of gustatory bliss. In fact, entire essays have been dedicated to this very scene, for it may be short, but it is most certainly sweet! The arousal of Proust’s tastebuds serves as a catalyst for the memories of his childhood to resurface, which in turn provides momentum for the rest of the novel. It is thus perfectly reasonable to regard this moment as the most crucial in the work. What’s more, much can be, and has been, said about this as an instance of ‘involuntary memory’. Marcel doesn’t bite into the little sponge in an effort to recall his childhood and conclude his novel. If only writing were that simple! But rather, he sits down to tea in the midst of a mental block, unable to remember details about his childhood home at Combray. It is only when the lime-infused crumbs pass his lips that he experiences a sort of taste-fulled déjà vu. A ‘déjà goûté’ if we’re being pernickety.

Proust’s multi-sensory reflections make you question the genre of the work – is it autobiography as the protagonist’s name would suggest? A novel, as one might conclude from the serial structure and descriptive techniques? Or perhaps a hybrid of the two – a sort of psychological autobiography, exposing the paradoxically fictional nature of memory and ‘the past’.

Whatever Proust’s intentions, this marvellous madeleine moment certainly stands out for its conspicuous banality. How can a little sponge scallop take centre stage in the masterpiece of one of France’s greatest authors?

Perhaps it’s no coincidence that the French for ‘masterpiece’ is ‘chef-d’oeuvre’!

On that note, here’s a recipe for rose-scented madeleines which will hopefully either evoke your own memories of this spectacular novel or provide necessary fuel if you decide to embark upon a longer lockdown read.