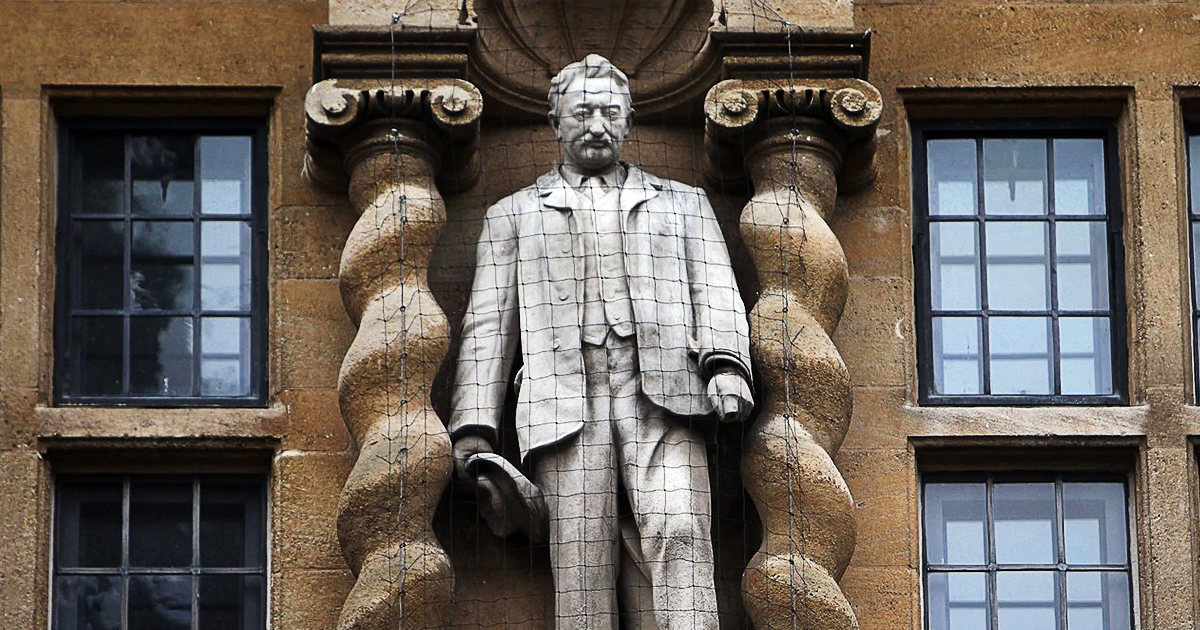 Image Description: The statue of Cecil Rhodes above the High Street entrance of Oriel College

An earlier title of this article used the word refute, as in “deny accusations” but this has been changed to deny for clarity, and a link defining anti-semitism has been added.

A statement, sent on 12th June, from the Equality and Diversity Officer of Oriel MCR condemning antisemitism at the Rhodes Must Fall protest has been denied by the speaker accused.

On the 9th June, thousands gathered outside of Oriel College, Oxford, to protests for the removal of the Cecil Rhodes’ Statue on the High Street. Adam Saeed, a student at the University of Leeds and a third-generation Palestinian refugee, spoke to The Oxford Student regarding claims that his speech made at this event was antisemitic in content.

The original letter, sent to the Oriel Governing Body by the Equality and Diversity Officer of the College, Euan McGivern, stated that “Israel was brought up in a context where Israel was not relevant. The speaker espoused conspiracies of Israel being responsible for racism in the West”. Euan wrote that Rhodes Must Fall (RMF) movement “gave a platform for anti-Semitic speech and uploaded that speech to Facebook. The crowd cheered the speech.” Further emphasising that:

“Many Jewish and non-Jewish students have contacted me to express their hurt and distress that this happened,” McGivern told The Oxford Student that he was becoming increasingly worried about the silence on antisemitism from Rhodes Must Fall.

According to International Holocaust Remembrance Alliance, the definition of antisemitism includes “Accusing Jews as a people of being responsible for real or imagined wrongdoing committed by a single Jewish person or group, or even for acts committed by non-Jews.” While Saeed used “Israel” instead of Jewish people, concerns were raised that this was terminology to mask antisemitism.

Responding to these claims, Saeed “strongly rejects any accusations of antisemitism made against [him].”

“As a third-generation Palestinian refugee and an activist for human rights, I came to the rally first and foremost to show my solidarity with the RMF, Black Power and Black Lives Matter movements.” Saeed’s speech at the event, which can be seen here [at 40:00] was received positively by the crowd.

According to Amnesty International, US police forces have routinely travelled to Israel for training, which is where the part of Saeed’s speech, that “American police are trained by the Israel oppression army,” comes from and caused a particular backlash.

Regarding the relevancy of Israel in the context of the Rhodes Must Fall movement, Saeed told The Oxford Student “just a few days after the murder of George Floyd in Minneapolis, an autistic Palestinian man, Iyad Hallaq, was shot ten times in his back while on his way to the school he worked at by the Israeli Police.”

“Just like the murder of George Floyd, this was not an isolated incident, rather it is the brutal manifestation of systemic racism and colonialism. It is important to focus on the reason why activists gathered on that day; to demand decolonisation, justice and an end to police brutality, not only in the USA but everywhere else.”

McGivern also called on the leadership of the Oxford branches of Black Lives Matter and Rhodes Must Fall to distance themselves from the speaker and the portion of the crowd that cheered.

In a later comment made on the 15th June to The Oxford Student, McGivern stands by his letter to the Oriel Governing Body, calling the notion of “oppressors” being “united” as said in the speech a “dog-whistle to conspiracies that frame Jews as responsible for all the world’s evils”.

The Oxford Student spoke to a Jewish member of Oriel College, present at the meeting where McGivern brought up his concerns, who told us that they believed the allegations of antisemitism served a dual purpose.

“First, it sought to discredit the righteousness of Rhodes Must Fall, and imply that to support the movement is to be complicit in antisemitism.”

“As a Jewish member of the MCR, it is hurtful to me when people use allegations of antisemitism to divert attention from the oppression of other groups. Further, I bristle at the implication that criticising Israel, which is valid, is automatically anti-Semitic.”

“Second, these allegations served to demonstrate that the Equalities and Diversity Officer is being proactive in their role, [but] It is telling that this complaint has not yet been emailed or posted to MCR”

According to them, McGivern in his position as Equality and Diversity Officer has been mostly silent throughout the debate on the Rhodes statue. Concluding that “their time would be better spent tackling institutional racism within the College”.

Saeed affirms that it is his right and moral duty to speak up on these injustices:

“I see these accusations not only as wholly baseless but as an attempt to shut down a progressive Palestinian voice.” Denying claims made against him, he said: “it is not antisemitic to stand in solidarity with the Palestinian people and to advocate for their human rights”.

“It is everyone’s moral and ethical duty to stand in solidarity with people fighting oppression.”

The Rhodes Must Fall campaign has been approached for comment. JSoc (Oxford University’s Jewish Society) declined to comment