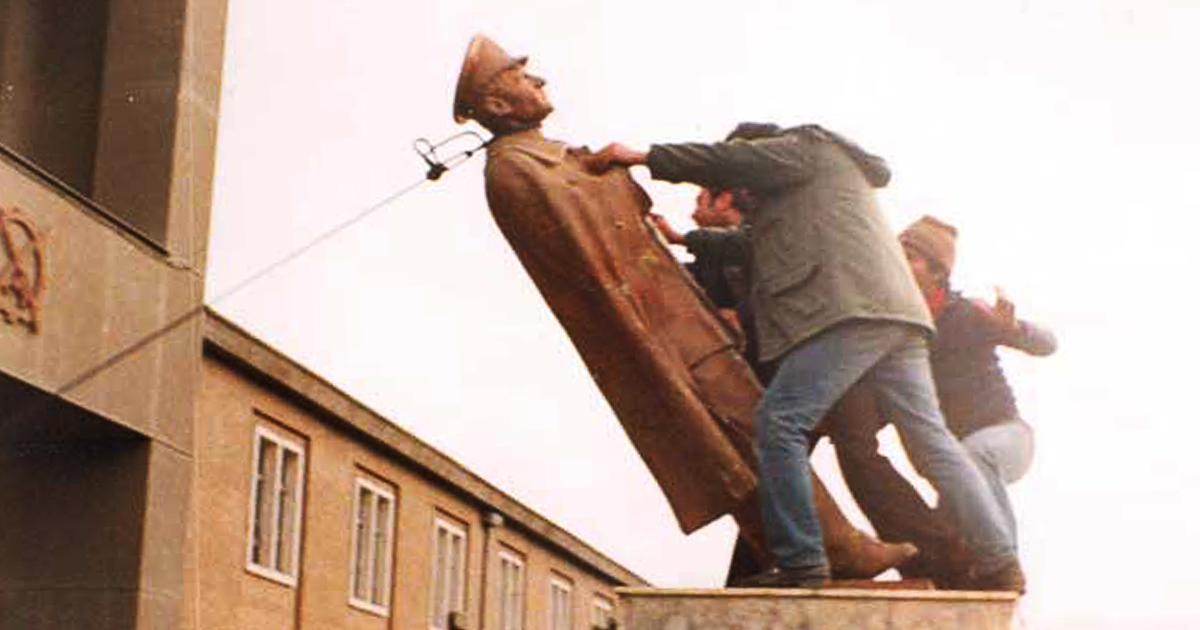 Image Description: Removal of a statue of the Shah in Tehran University during the revolution in 1978

Recent successes for the #RhodesMustFall movement has left many Oxford students with a sense of frustration. Of course, it’s good to see progress finally being made on this issue. What’s disappointing is the length of time it’s taken to get here and the as yet inadequate solution. After more than 1,000 protestors took to the streets outside Oriel, the governors of the college have finally voted to begin the removal of Rhodes.

In typical Oxford fashion, any immediate action is out of the question. There will also be an independent inquiry into the life and legacy of Rhodes. By itself, this action is encouraging, but it seems many have still not got the message. University chancellor Chris Patten is one of them. Patten has suggested that the presence of Rhodes scholars, many of whom are from Africa, at the university makes calling for the statue to come down ‘hypocritical’.

The chancellor also argued that if the statue was “alright for Mandela… it’s pretty well alright for me”, referring to the late South African president’s establishment of the Mandela Rhodes Trust in 2003. These comments, made only this month, are both ignorant and tone-deaf. Implying that former and current Rhodes scholars should be silent on the actions of Rhodes out of ‘gratitude’ is patronising and degrading.

Bringing in Mandela, a man who fought his entire life against colonial and supremacist oppression and equating a willingness to compromise with endorsement is a further willful ignorance of history. But Patten is not alone.

The effigy to Rhodes adorning the entrance to Oriel is but one piece in a national and global conversation. Everyone, it seems, has some opinion over whether or not we should continue to memorialise those whose views or actions would now be considered repugnant. As a historian, I know that characters like Cecil Rhodes are complex.

For me, Zimbabwean historian Peter Goodwin put it well when he said, “Rhodes and his cronies fit in perfectly with their surroundings and conformed to the morality (or lack of it) of the day.” Rhodes was a man of his time, but his time is over. Our time is now, and we are right to recognise Rhodes and the time he lived in as unacceptable by our standards. We in Britain especially could benefit from knowing a great deal more about Rhodes the man and the legacy of empire.

Yet, I am constantly being told, from both public and personal sources, that removing statues will somehow erase our history. I take issue with this argument for two reasons. Firstly, it’s demonstrably wrong. Across Germany, icons of Nazism have been taken down and publicly banned. Yet, Germans remain culturally conscience of the darkness in their history and have been proactive since the end of the second world war in both acknowledging that legacy and moving forward from it.

In the former countries of the Soviet Union, statues of Vladimir Lenin have been coming down since 1990, without collective forgetfulness at the crimes of the USSR. Confining the statues of historical figures who no longer meet our moral standards to museums can provide the best platform to start a dialogue about these figures as they really were. The second issue I have with the argument is that many in Britain are woefully unaware of the actual realities behind those they lionise.

How many, for example, know of Churchill’s involvement in the Bengal famine in 1943 which saws the deaths of over 3 million people. Are Churchill’s staunchest defenders aware of his unleashing the infamous Black and Tans against the Irish Catholics while Colonial Secretary in the 1920s? And one wonders how many squares their admiration for Churchill against his expressed wishes to use chemical weapons against the Kurds in the hope it would “spread a lively terror”.

To me, it seems counterproductive to ‘defend’ history while not understanding the full story behind it.

There are some, of course, who excuse the presence of these monuments because they celebrate the good deeds, divorced from the bad. Patten and others might argue that Rhodes should stay on the grounds of the scholarships his wealth has funded or his donations to Oriel. Others might say that Churchill’s memorials ought to stay to honour his role in leading the United Kingdom during the Second World War.

There were even some who claimed that Edward Colston’s charity work should entitle his statue to remain on display in Bristol. Of course, this argument does not stand up to the mildest scrutiny. In the minds of those from the communities affected by these figures, such separation is impossible and implausible. Someone like Churchill will of course always carry great historical and cultural significance.

There can and should be a frank and honest discussion about Churchill the man that highlights his achievements as well as his crime. But this cannot take place until we collectively accept that criticism of Churchill is not only acceptable but actively necessary.

Like all countries, the UK has a complicated history. Is there much to be proud of? Yes. But there is also a lot we need to reflect on more critically. There are lessons that we need to learn, and actions we need to ensure we do not repeat. It is easy to feel a sense of overwhelming shame when confronting these historical crimes, but I believe there is a distinct patriotism that can come from this self-reflection.

By critically looking back, we must also look forward and ask ourselves both ‘how far have we come’ and ‘how far can we go’.

Rejecting the errors of our past allows us to embrace a brighter future of a Britain better than ever before. And retiring the idols of yesteryear leaves room on the pedestal for the heroes of tomorrow.

So no, let’s not ‘erase our history’. Let’s learn to properly understand and accept it. And then let’s use that knowledge to go optimistically into the future and build a country that’s fair and just for everyone.