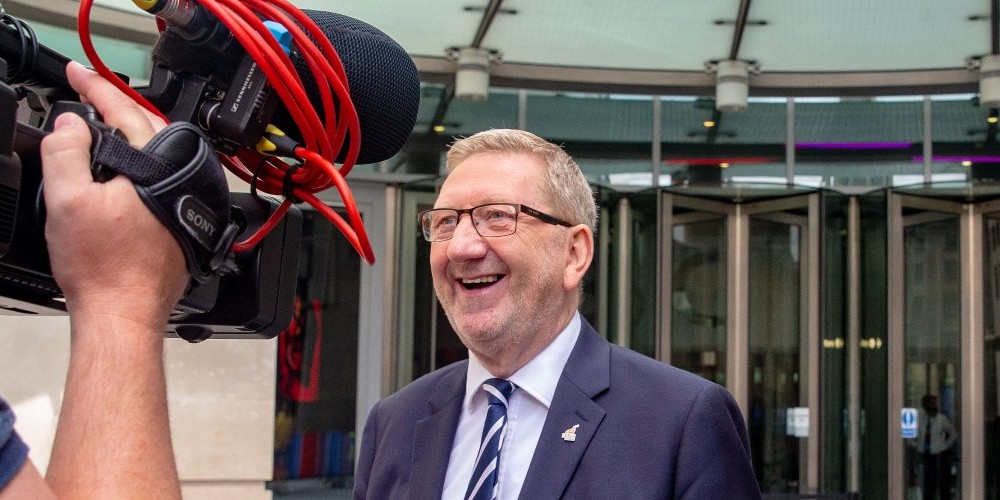 Image: Len McCluskey in front of a microphone, from Twitter.

Len McCluskey, General Secretary of Unite the Union, published a book earlier this year titled ‘Why You Should Be A Trade Unionist’. The book, about 140 pages long, talks about both impact that Trade Unions can have and have had on society today. I spoke to him about his book and his views on the future of Trade Unions.

I began by asking McCluskey what he hoped to achieve when writing the book.

‘Probably the best way I can describe that is telling you the reasons how I came to write the book. I was having a conversation with my colleagues about a number of things; actually, we were talking about the fact that on television there is never any mention of trade unions in any of the soaps in Coronation Street or East Enders or any UK programmes […]. It struck me especially when we see that despite being the largest voluntary sector body within our society we are not part of the school national curriculum and so the view emanated from there that I should write a book […] to say why you should be a trade unionist and, in particular, to kind of aim it at young people because young people are the ones that are most at risk of exploitation by bad bosses or greedy bosses when they go out in the world of work.’

McCluskey also spoke about the narrative he was hoping to convey in his book:

‘What I tried to do in the book is to give a very brief history about where trade unions come from, and who we are and also then try to talk about why being a trade unionist and becoming part of a collective is something that all workers, especially young workers, should consider. So that’s what it is- I’m trying to achieve a view that says if people have a perception of trade unions being bad and always causing trouble, there’s another side to trade unions and it’s about winning better pay and conditions […]. That’s what it’s about, really, just getting people talking and thinking about trade unions.’

I asked him why he thought people, and especially young people, should be involved in Trade Unions:

‘As young people go out to work, they’re going to be faced with all kinds of issues, especially if they go into the world of work without qualifications and without a clear career path. […] They’re going to find themselves in the gig economy, precarious work, zero-hour contracts: all of those issues that exploit young workers […]. In that sense, a lot of young people will think that they’re being unfairly treated but will feel there’s not a lot they can do about it – they’re a single individual.  […] Trade Unions really just provide an opportunity for workers to come together as a collective so that they’re not a single voice: they are a collective voice. That way, employers have to listen to them whereas an employer doesn’t necessarily have to listen to one single voice. You know, there are good employers out there who would listen to one single voice and who are not looking to exploit young people, but unfortunately there are lots and lots and lots of bad employers who are just interested in making a quick buck, making profit, and to do that they very often don’t treat young people in particular with the respect that they should.’

To expand on this point, McCluskey spoke of the impact of Trade Unions on his first job when working on the Liverpool docks:

‘It was different when I was young. I remember when I left college back in the 60s and there were lots of jobs. When I went to work in my first job as a young person I found that we weren’t being paid, as young people, the right rate for the job; […] I think we didn’t get the full adult rate until we were 25, which was ridiculous: we were doing the same as the adult workers […]. So I organised all young people – it was on the Liverpool docks at the time and there was about 150 young people -and we came together and we, instead of being a single voice that could be dismissed,  were a much larger group who eventually won our wage. I remember my wages, I can remember as though it was yesterday, increased by 100% overnight. So, in a sense, that is what trade unions can do for you […]’.

In 2018, Trade Union Congress revealed that in the previous 17 years its membership levels of those aged below 30 years had declined from 20.1 percent to 15.7 percent. I asked McCluskey about why he thought fewer young people were engaging in trade unions and whether a lack of awareness played a role:

‘I think awareness […] – when I was growing up in my city Liverpool, Liverpool was a Trade Union city: I knew about trade unions and the first day I went to work I joined a trade union. But if I go back to Liverpool now, young people struggle to explain what trade unions are and in lots of other places I go to, young people haven’t got a clue. […] However, of course, the other reason is the precarious nature of employment these days. It’s very, very difficult to organise in the so-called gig economy and in areas of the service sector […] so you do find that lots of young workers become transient workers: they’ll have a job in a particular sector but […] it won’t be an employer that they stay with for a long period of time. In my day, if you went to work for a company, you’d probably expect to be working for that company for 25/30 years. That has vanished now and so there are a number of factors why young people find it difficult to organise or/and don’t know enough about trade unions […]. It is challenging because one thing is certain: if we don’t have young people in any organisation, including trade unions, then that organisation will wither on the vine because you need young people coming through and replacing old people like me and pushing us to one side […].

To finish off, I asked McCluskey what he thought were the best achievements of Trade Unions in the UK. He was clearly struck by the difficulty in answering the question:

‘[…] Trade unions, in my opinion, have always been a force for good. I often think, sometimes with horror, what would society be like without trade unions because TU have been responsible for advancing fairness and justice for ordinary working people and this goes way, way back. […] Right the way through, trade unions have always been […] on the side of the angels, fighting against slavery, fighting against child labour, fighting for women suffrage, fighting against fascism and antisemitism [and] then fighting for all the things that we now take for granted: the equal pay act, the health and safety at work act ,which has literally saved tens of thousands of lives. […]Maternity, paternity leave, holidays, holiday pay, the right to be treated with respect, the minimum wage the living wage; all of these have been fought for by trade unions and all of those things we can be proud of. That’s why my book is a history […], saying that we should be proud to be trade unions, because what we’ve done and achieved has advanced ordinary people in a way that we now take things for granted and, in a way, that if we didn’t have trade unions this would be a more grossly unfair society in which we live.’

Why You Should Be A Trade Unionist is published by Verso and available in many book shops.