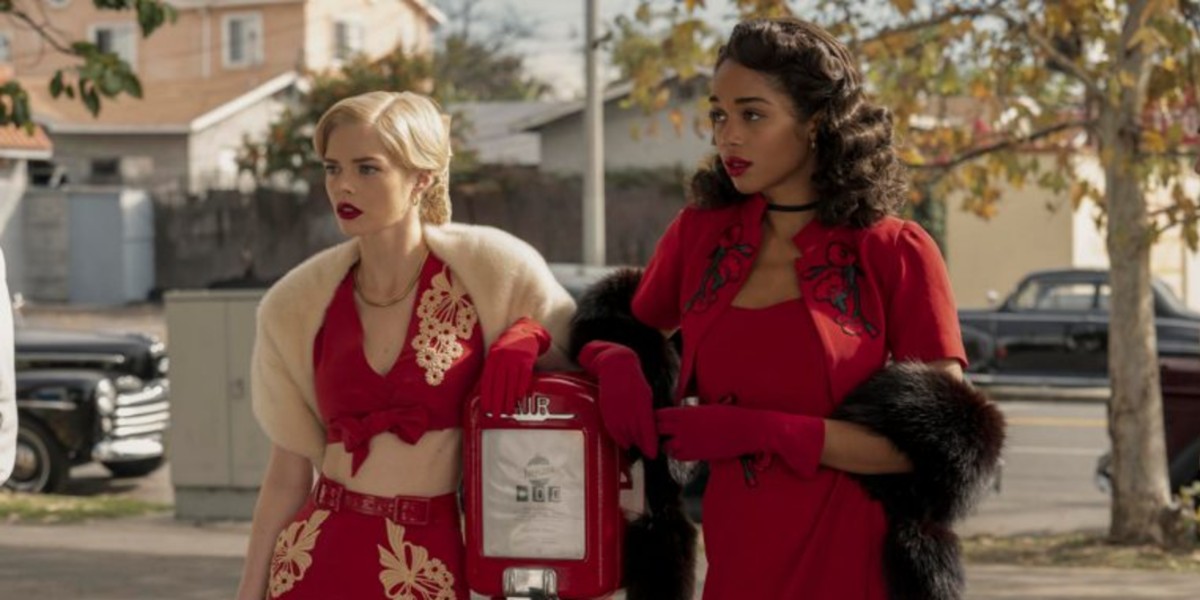 Ryan Murphy’s newest creation dropped on Netflix at the start of May. Hollywood is a miniseries, incredibly binge-able at only 7 episodes. It tracks the production of the movie ‘Peg’, where a white woman commits suicide as a result of the hostile Hollywood environment. This is later changed to ‘Meg’ to feature a black lead, played by Laura Harrier as Camille. The fictional film is written by a gay black man in the 1940s, portrayed flawlessly by Jeremy Pope, alongside other protagonists played by names such as Darren Criss, David Corenswet, Patti LuPone and Jake Picking, with Picking playing a fictionalized Rock Hudson.

This series excels in its settings. The costumes, sets and music bask in the glow of 1940s Hollywood. The soundtrack is filled with these gorgeous jazz tunes by Ella Fitzgerald, Cole Porter and Gershwin. They underscore melodramatic dialogue that verges on caricature. At times this makes for a jarring contrast to the subject matter; prostitution and sexual exploitation in Weinstein-esque situations assume an almost comedic take. When the clients of the male prostitutes are taken to ‘dreamland’, the word takes on a meaning greater than just the code word used to keep the business covert; Murphy uses it throughout the series to remind us of what he has created.

The real conversations about race, gender and sexuality don’t always feel as though they are placed in the right way, which would give them the gravity needed. However, this facade has cracks in it, and begins to break down as the series progresses. When the sexual exploitation is finally addressed through an apology, and by showing the damage it has caused, or when the screenwriter discusses intersectionality and describes the realities of being black in America at that time. The real world peeps through and reminds us of its existence.

The real world peeps through and reminds us of its existence.

The reality of the historical context and the current state of the world are always present, race and sexuality being the main themes of Hollywood, along with the medium of film itself. Murphy creates a progressive parallel universe taken to the extent which is too optimistic for the 1940s. It’s a utopian world, set in a lost past.

There’s an element of intense tragedy when watching the characters in Hollywood succeed, as we know how far it is from the harsh reality their real counterparts faced. Anna May Wong died at age 56, still disillusioned with the fetishised parts she had been made to play in Hollywood; Halle Berry was the first black woman to be recognised with an Oscar for best actress 2002, and Rock Hudson was never able to be open about his sexuality.

When Murphy takes us so far into dreamland, it becomes harder to suspend disbelief, we’re forced to contrast the world around us with the characters in Hollywood and we find ourselves lacking. This is presumably intentional, by setting modern discussions of intersectionality, representation and white and straight privilege in the 1940s, and thus showing us that to not be an ally would have been wrong even in that context, Murphy highlights how immoral this is today.

However, the miniseries has been criticised in its approach to the way that characters challenge their oppression. For some people, the show implied that if people had only been a bit more assertive then they could have changed things much earlier – basically amounting to a form of victim-blaming. When I watched the series I felt that Murphy showed that the change had to come from the top of hierarchies in the industry. The actors and directors, who were mostly the protagonists of the show, striving for change, for me, felt most relatable and realistic. It was the head of a studio that put values ahead of profit, the repenting sexual abuser, the invisible homophobic boos, and how a good movie can make racist protests “simply melt away” that made the utopia Murphy creates so far out of our reach.

This was the intention, as Murphy wanted to create a “revisionist history”, but his dream wasn’t executed as well as it could have been. It hasn’t started a conversation and has also not paid homage to real people who struggled to make a change. With a little more subtlety and aligning closer to the truth, Murphy could have made a more thought-provoking series.

Janet Mock, a black director, and Jessica Yu, a director of East Asian origin, direct three of the episodes. The other four episodes are directed by white men. Although Ryan Murphy himself is gay, race is such an integral part of the show his choice of directors feels like it hits a bare minimum. Having more people who have lived experience of one of the show’s main themes be in charge of the production might have allowed it to be a little more impactful.

Hollywood did not add to the discussion about inclusivity in the media, it only further highlighted our failings. When the show ends, dreamland melts away with the jazz and the glamour and we return to reality, the one we were always starkly aware of.