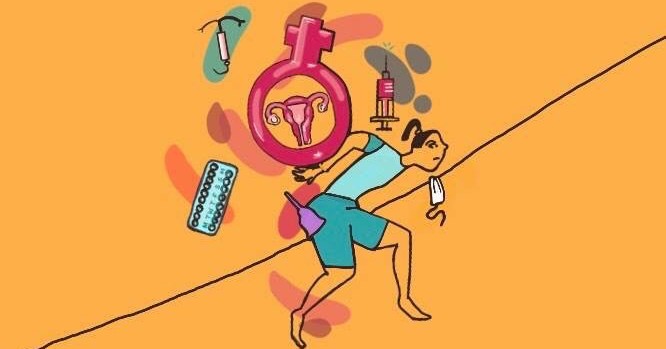 Women in need of protection? The fundamental problems with contraception

In the middle of a pandemic, with many of us stuck inside our homes for most of the day, it might seem a little counterintuitive to consider how much sex our generation is having. All that aside, it will probably not come as a surprise that young people today are more sexually active than ever before, with the average number of sexual partners per person doubling since 1974.

But what is it that seems off about all these options? The catch is, they’re all for women. Except, of course, for the condom – which, unlike the requirement of the others of a doctor’s prescription or invasive procedure, can be conveniently bought from a supermarket. And unlike the condom, many of these methods of female contraception physically alter a woman’s body, not only having to be surgically implanted or causing changes to hormonal levels, but sometimes resulting in side effects such as weight gain, acne, drops in mood, and blood clots. Even non-hormonal contraception such as the copper IUD – which functions as a spermicide – can lead to heavier and more painful periods.

And yet, even with all these body-altering choices, they are simply not suited to some women’s bodies.

Recently, I was diagnosed with polycystic ovarian syndrome as a result of a hormonal imbalance in my body: an imbalance experienced by about 1 in 10 women that would be seriously exacerbated by the hormonal effects of most female contraception. Similarly, women who have a family history of blood clots or migraines with aura cannot take many methods of female contraception. So what can be done instead?

I was talking to a friend of mine in a similar situation who – finding the rudimentary mechanics of condoms fiddly, awkward, and a bit of a mood-kill – asked if there was anything else her boyfriend could do. I told her to tell him to get a vasectomy. All jokes aside, I then actually looked up ‘the pill for men’ on NHS Inform only to find out the often permanent vasectomy procedure is literally the only other method available today for men.

The BBC recently published an article by Michelle Roberts that revealed the main reason there isn’t a male contraceptive pill yet is that there isn’t a sufficient “social or commercial will”, despite tests into synthetic testosterone and other steroid combinations to prevent sperm production which, in some countries, have reached phase three trials. In other cases, such as the latest tests on the male pill in LA and Washington, testing stopped before phase two because scientists were concerned by “mild” hormonal side-effects, acne, and drops in mood which, for women on the pill, might sound a bit familiar…

The article concluded with a quotation from Professor Allan Pacey of the University of Sheffield who stated: “Unfortunately, so far, there has been very little pharmaceutical company interest in bringing a male contraceptive pill to the market, for reasons that I don’t fully understand but I suspect are more down to business than science.”

Although I agree that pharmaceutical companies are undeniably profit driven (sometimes over ‘science’ and human wellbeing), I don’t believe that the situation surrounding the lack of a male pill is as unclear or unfathomable as Pacey suggests.

In fact, it seems that the status of contraception today reveals the deeper, ingrained cultural sexism that is still prevalent.

The widespread presence and variety of body-altering female contraception might, as Second-Wave Feminism first championed with the pill, seem to give women more freedom and control over their sexuality without risk of pregnancy. However, there is something concerning today about the way that it is women – not men – who are expected to physically alter and change their bodies to exercise their own sexuality.

There is something concerning too about the way that current choices offered to women (although the UK rather uniquely subsidises some female contraception) are expensive investments, with the pill in some countries costing up to £30 a month and the birth control implant up to £650. And while its easy to simply walk into a Tesco and anonymously buy a pack of relatively cheap condoms, women often have to go their G.P., family planning clinic, or pharmacy to obtain a prescription for their contraception: an experience that can sometimes be awkward, embarrassing, or even shaming.

Professor Adam Watkins of the University of Nottingham recently wrote in The Conversation  that “the burden of family planning looks to remain firmly on the shoulders of women for now.”

Sexuality should never be a burden, nor should it be driven by the profit of fundamentally patriarchal, capitalist institutions. And if the burden is on women, than there is an inherent imbalance that continues to haunt heterosexual sexual relationships.

We live in a market economy. Pharmaceutical companies are driven by demand. If society continues to push for the need for more male contraception such as the male pill, it might one day be as readily available as the female pill. Because in the fight for contraceptive equality, and the many more choices and options made available by it, all genders and sexualities will benefit.