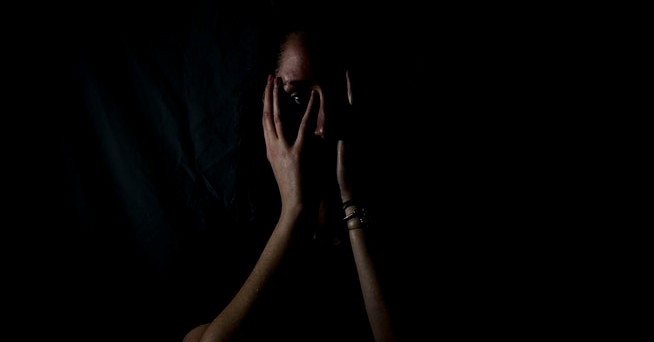 Image description: A woman in a dark room, with her hands over her face.

“Start with the cage and everything changes.” These are the words of Evan Stark, a forensic social worker and leading voice on coercive control. Despite recent changes to the law, our view of domestic abuse is still outdated. It remains confined to the individual, physically violent incident. We must appreciate the “cage” structure within which domestic abuse victims live.

Coercive control is a relatively new concept in the study of domestic violence. Stark first coined the term in 2007, in his influential work Coercive Control: How Men Entrap Women in Personal Life. Coercive control was only criminalised in England and Wales in 2015, and the UK has been a world leader on this issue. In the Serious Crimes Act 2015, coercive control was defined as “a pattern of acts, including assault, threats, monitoring and intimidation designed to frighten and punish the victim and isolate them from family and friends”. Building on the same law, a Domestic Abuse Bill was proposed by Theresa May in 2018 and reached committee stage in Parliament in early June this year. The Bill seeks to create a statutory definition of domestic abuse, emphasising that it is not just physical violence – rather, it also includes “emotional, coercive or controlling, and economic abuse”. A coercive control framework draws attention to non-violent, psychological and gendered aspects of domestic abuse, which help to explain the iron grip of abusers and why victims often return to them.

Despite these legislative initiatives, implementation has proved difficult. By the end of August 2016, there were just 59 convictions for coercive control. This figure is low, given that coercive control is the bedrock of most abusive relationships. The coronavirus pandemic has caused even more concern for domestic abuse victims, and has brought the issue yet again to the forefront of national attention. Vulnerable people have been forced to stay in lockdown with their abusers. Eerily, the number of calls to domestic abuse services dropped significantly in the first few weeks of lockdown, as victims could not get free access to a phone while trapped at home. In a Women’s Aid survey published in May measuring the impact of COVID-19 on domestic abuse victims, 67.4% said that the abuse had worsened since lockdown began, and 78.3% said that COVID-19 has made it harder for them to escape abuse.

Vulnerable people have been forced to stay in lockdown with their abusers.

The nature of coercive control is insidious. Bruises are not always visible. Rather, personalised knowledge of the victim is exploited. It is effective not because of the physical strength of the abuser, but because threats of violence are tailor-made to their victim. This is what Stark calls ‘intimidation that feels like love’. Various tactics such as arbitrary rules, cyberstalking and constant phone contact serve to erase the line between confinement and freedom. This is achieved by extending surveillance tactics beyond the home, to all those places where the victim might restore a sense of their autonomous identity or access support. Stark also emphasises that coercive control is a gendered crime. One of the reasons why it can be so difficult to spot is that it involves behaviours that conform to normative gender performances. Men are more likely to deploy coercive control tactics successfully because they fit within a cultural script of masculinity which demands they take control. Stark notes that abusers often draw on women’s feminine identities in their abuse, such as controlling their appearances, and criticising their abilities as housewives and mothers.

To understand the dynamics of coercive control, we need to shift our understanding of domestic abuse away from one defined solely by incidents of physical violence. In February this year, Hannah Clarke and her three young children were brutally killed in Brisbane, in a car fire set by her abusive ex-partner. Before her murder, Hannah was subject to little physical violence – but when they were together, Hannah’s former partner controlled microscopic details of her life. He told her what to wear. He monitored her phone. He isolated her from her family. The traditional “calculus of harms” used by the police is, in fact, a very poor marker of domestic violence. A 2016 report by Andy Myhill and Katrin Hohl found that patterns of coercive control were the best predictor of the risk of domestic homicide, far better than assessing the severity of physical assault alone. The best indicator of domestic violence is not its severity, but its frequency, duration and cumulative impact. Instead of measuring the suffering of abused women in bruises and broken bones, the experience of coercive control is better understood as akin to living under a tyrannical regime.

To understand the dynamics of coercive control, we need to shift our understanding of domestic abuse away from one defined solely by incidents of physical violence.

One of the most influential factors in changing the public perception of coercive control in the UK was Helen Titchener’s storyline on The Archers. Her husband Rob belittles, gaslights and routinely rapes Helen until one day, she snaps and stabs her husband. The storyline initially started before the Serious Crimes Act had been passed. Its cultural impact was huge. It made the front pages of the tabloids and a fundraising page put up in Helen’s name raised nearly £200,000 for domestic abuse charities. It also gave the listeners an insight into the duplicitous ‘Jekyll and Hyde’ nature of many abusers’ personalities, as Rob was portrayed as charming and charismatic, but also controlling and manipulative.

There have, on rare occasions, been successful convictions of coercive control under the Serious Crimes Act. Lee Coleman was one of the first people to be prosecuted under the new law in 2016 after he displayed controlling behaviour throughout his twelve-year relationship with Amanda Scrivens. He managed the couple’s finances, giving her only a small allowance. In a disagreement about Amanda wanting to take over the tenancy of a local pub, he belittled her, telling her she could never do it. Later that night he smothered her with a pillow in front of her children and was sentenced to three years in prison – yet he only served one year. Even more disturbingly, Amanda was not told that he had been released from prison, and was instead informed of this by a friend.

Coercive control has an even more ambiguous impact in cases where women have killed their abusers. A landmark case which drew attention to coercive control was that of Sally Challen, a woman who was convicted in 2011 for the first-degree murder of her husband, Richard. On appeal, her sentence was reduced to manslaughter, and she was released in 2019. Harriet Wistrich, founder of Justice for Women, used Richard’s manipulative behaviour over 31 years of  marriage to explain Sally’s actions in her defence. After the couple separated, and Sally found it difficult to cope on her own, Richard came up with a ‘post-nuptial’ contract, insisting that Sally quit smoking, not interrupt him amongst friends, and only accept £200,000 in a settlement of their joint assets.

But the triumph for the coercive control argument used in Sally’s defence was far from absolute. Though Sally’s appeal for a reduced sentence was granted, the judges emphasised that they were more persuaded by the recent psychological discoveries about Sally’s mental health than by the new coercive control framework. Experiences of coercive control do not fall under the two possible defences for murder: provocation and diminished responsibility. Stark, who was an expert witness in the Challen case, believes that lawyers should be able to use a “liberty defence” rather than a psychiatric one. When abuse is framed as a capture crime, the narrative changes. After all, no one would charge a victim of abduction with homicide for killing their captor. In Sally’s case, it was not enough that her husband had constrained her liberty for decades and controlled her every activity – she had to be seen as mentally ill. We are a long way from recognising the retaliation of abused women as self-defence and a desperate bid to escape, rather than as an act of fatal insanity.

Though Britain is ahead of the curve on the issue of coercive control, it remains a difficult offence to prosecute. Police are not trained to ask about the signs of coercive control like the sequestering of finances and dictation of a partner’s physical appearance. Coercive and controlling behaviour is inherently more difficult to spot than physical abuse, and the sheer number of cases means that police cannot often afford to look beyond the isolated incident which has been called to their attention. Because crimes of coercive control are difficult to identify and to prosecute, repeat abusers may have no official criminal history. DI Larry Johnston of the Domestic Abuse Investigation Unit at Thames Valley Police has said that 43% of the victims he deals with are repeat victims, meaning they suffer another crime within a year of reporting. Victims often retract their statements too. Natalie Hemming, who was murdered in May 2016 by her partner Paul Hemming, had made statements to the police about his controlling and abusive behaviour as far back as nine years before her murder, but had retracted them all. Yet retraction should be recognised as a potential sign of coercive control in and of itself.

The difficult reality is that for many domestic abuse victims, particularly those experiencing the psychological strains of coercive control, it is far more difficult to leave their abuser than to stay. Some of the reasons women might feel they can’t leave their abusive home life are economic dependence, wanting to protect their children, lack of a support system and fear of the escalation of violence. Despite the difficulties of prosecution, once we are able to understand domestic abuse as a long-term capture crime rather than a series of individual violent episodes, we will have a clearer view of the “cage” which entraps domestic abuse victims. It will also help us to see why victims respond to abuse in the way they do, either in their reluctance to leave or, in rare cases, their violent retaliations.