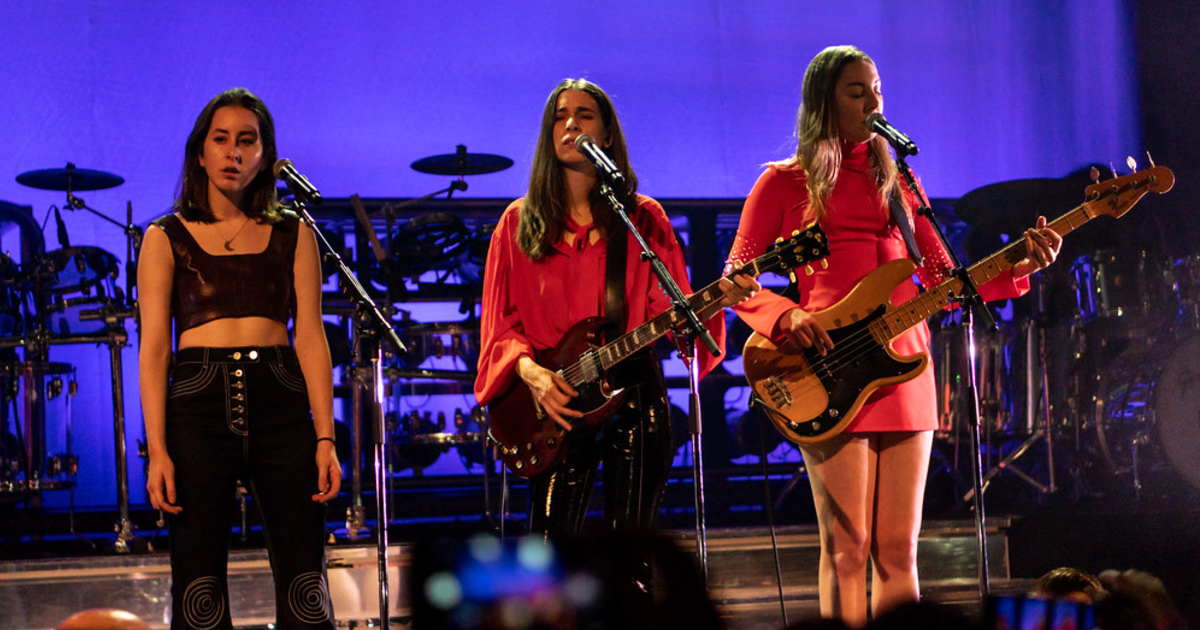 Haim’s 3rd studio album, Women in Music Part III is a triumph.  Affectionately known as WIMPIII, and released in June, the album has found a primary place on Billboard’s Top Rock Albums and was the no.1 album in the UK for a week. Its current position, at 46, is a level of obscurity which it does not deserve. The band, made up of multi-instrumentalist sisters Este, Alana and Daniella Haim, already had a strong discography.

But this album feels as though they’ve been given more air to breathe. Within its 16 tracks, some are noticeably less likely to be chart hits; ‘Man from the Magazine’, for example, is far more of an angry protest song than it is a song to dance around your kitchen to. It is experimental in places, and shows the band reaching for a new sound, and yet remains enjoyable to listen to.

There is no one distinct category which the band falls neatly within. The more traditional pop vibes of ‘Don’t Wanna’ contrast to the fuller folk sound of ‘Leaning on You’, and ethereal moments give way to strange synthesised sounds. At points it is distinctly reminiscent of Joni Mitchell and the openings in particular often feel comparable to Fleetwood Mac (though the sisters have noted their discomfort with this comparison). The sound is also often refreshingly fun; an alarm clock blares at the end of ‘Up from a Dream’, and ‘3am’ is interspersed with the sounds of a late-night booty call. A parodic male voice drones “no biggie/ um, if you’re up or whatever, just hit me up”, whilst the band runs musical rings around him.

The title, Women in Music Part III, informs the diverse content of the album. ‘Man from the Magazine’ is the most direct in dealing with their experiences in the music industry – a journalist asks invasive and inappropriate questions and expects them to accept this. They will not. They also refuse to fall within the confines of ‘girl band’ content: ‘Now I’m in it’ could be a classic breakup song, but Daniella Haim has said that, instead, it is about mental health. In this album, the key relationship is the one you have with yourself.

In this album, the key relationship is the one you have with yourself.

Then again, in ‘The Steps’, their feminist cry that “every day I wake up and make money for myself/ And though we share a bed, you know that I don’t need your help” doesn’t exclude their desire for relationship resolution. A particular highlight is ‘Hallelujah’, a song which explores female friendship, and their relationship as sisters, in rarely honest terms. Its approach to the grief of Alana on the death of her best friend is genuine and emotive.

Had this album been released into the world Haim were undoubtedly expecting it to, I have no doubt that ‘Summer Girl’ would have been the hit sung in the crowded evening atmosphere of countless festivals. But given their struggles with the demands of this kind of performance and touring (on both their mental and physical health) lockdown may have made things far more sustainable for them.

The current situation also gives the hidden gems of the album space to shine – ‘I’ve Been Down’ for example, is strangely relevant to a situation they could not possibly have predicted. Its repeated needing help to return to happiness is extraordinarily pertinent. After all, who hasn’t been trying to get themselves through this by “watching too much TV/ looking up at the ceiling”?

‘I’ve Been Down’ for example, is strangely relevant to a situation they could not possibly have predicted.

This is an album that manages to be direct and powerful in its message, whilst also containing a lot of nuance: self-assured, reflective and powerful, it contains hit after hit. It deals with everything from nostalgia about their childhood home to the modern obsession with our phones, and yet the album feels like a whole; its disparate elements still make sense together. Claims that they’ve forgotten their ‘sunny sound’ in favour of too much sombreness don’t ring true: Haim’s newfound maturity in this album is a revelation, not a disappointment.