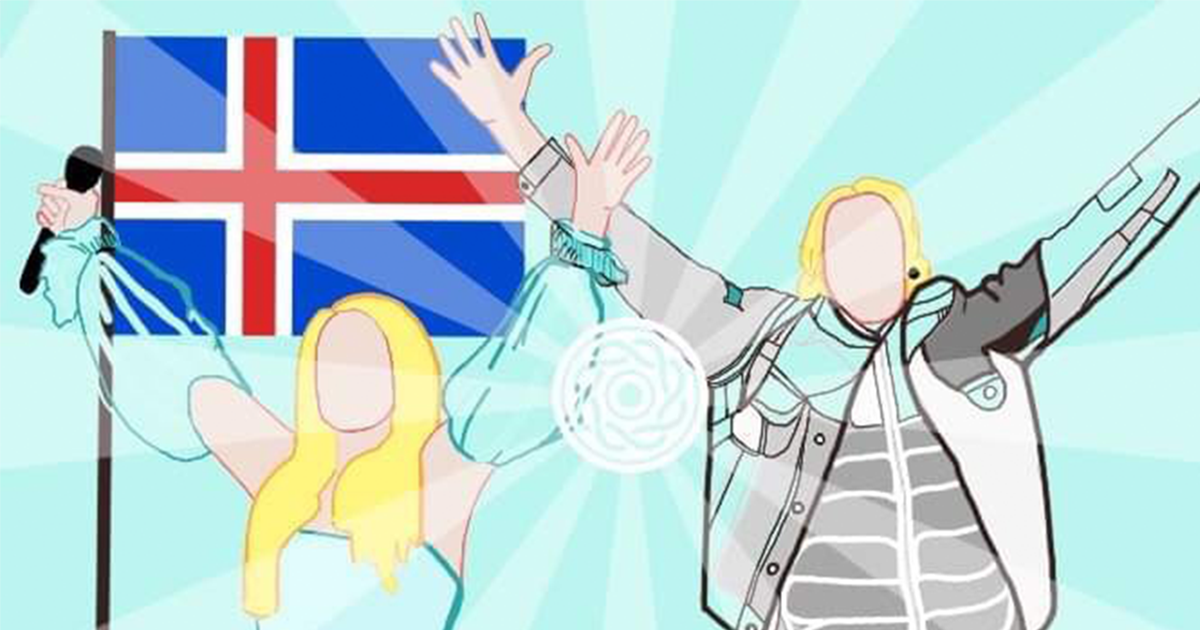 Image Description: characters Lars and Sigrit on stage in front of the Icelandic flag

Like millions of other Eurovision enthusiasts, I felt my heart sink on March 18th – the day we heard that this year’s contest would no longer be going ahead. I hung my head as I cancelled my viewing party plans and put away my flags and novelty sunglasses, ready for a year without a week-long celebration of mediocre Scandinavian pop music and petty rivalry between countries. However, not all hope was lost – we still had the hotly anticipated Eurovision Song Contest: The Story of Fire Saga on its way.

The film tells the story of Fire Saga, an Icelandic singing duo determined to fulfil their childhood dream of representing Iceland at the Eurovision song contest. Though their families look on disapprovingly and their performances are nothing short of disastrous, a bizarre turn of events means that the two are whisked off to Edinburgh to take part in the semi-final.

I was initially skeptical when I first heard about the film – could Americans do Eurovision justice? Did they really get Eurovision and could they capture the camp chaos that European fans love so much? Fortunately the depiction of the contest itself exceeded my expectations – the team behind the film had clearly done their research.

With human-sized hamster wheels, pyrotechnics and a wonderfully catty commentary from Graham Norton, the film absolutely nails the spirit of Eurovision. A hallucinogenic, exuberant musical sequence halfway through the film stands out in particular, with more cameos than I can count from past contestants – it was a euphoric celebration of everything Eurovision represents.

Dodgy accents aside, the main cast give strong performances. Will Ferrell, known for portraying loud manchildren, is perfectly decent as Lars, the frontman of Fire Saga and… a loud manchild. Rachel McAdams is, as ever, a delight as his singing partner, love interest and possible sister Sigrit; Pierce Brosnan (who, thankfully, does not grace us with his singing) nails the role of Lars’ stoic, disapproving father.

However, the film’s standout performance comes from Dan Stevens as Alexander Lemtov, the flamboyant Russian singer marked as the favourite to win the contest. The entire cast, Stevens in particular, seem to be thoroughly enjoying themselves on screen and this certainly rubs off on the viewer – which, given the subject matter and tone of the film, is all one could ask for.

The entire cast, Stevens in particular, seem to be thoroughly enjoying themselves on screen and this certainly rubs off on the viewer – which, given the subject matter and tone of the film, is all one could ask for.

This is not to say that The Story of Fire Saga doesn’t have a number of blindingly obvious problems. As a Eurovision devotee, I couldn’t help but cringe at the countless technical errors – why were Spain participating in the semi final? Why were seven people on stage during one of the performances? How did the contest end up taking place in Edinburgh? This would imply that the UK had won the previous year, possibly the most outlandish element of the entire film. These are all minute details which shouldn’t stand out as much as they did, but I just couldn’t quite overlook them.

Aside from these details, The Story of Fire Saga is objectively not a fantastic film. The plot seemed thin and hastily thrown together with twists and subplots that just did not  go anywhere, the supporting characters were neither interesting nor memorable and the film’s comic treatment of incest and queerness was uneasy.

However, there was one issue that really did stick out like a sore thumb. The writers seemingly went beyond trying to overlook the obvious age difference between Ferrell and McAdams, and have gone out of their way to remind the audience that they have somehow been best friends since childhood (in real life, there is an eleven year age difference between the two actors). Flashbacks set in the 1970s seem to imply that the characters are in their early fifties – and yet, few appear to have questioned the casting of the famously fresh-faced McAdams.

This is only telling of a bigger problem which has permeated the film industry – any heroine that isn’t young, white and thin, who does not conform to Eurocentric beauty standards, is marked as undesirable and couldn’t possibly act opposite the devastatingly hunky romantic lead, Will Ferrell.

The film is absolutely ridiculous and incredibly self-aware – so one must suspend disbelief, however difficult it may be. The Story of Fire Saga does not take itself remotely seriously, nor does it encourage the viewer to do so. It is riddled with flaws and errors, but this does nothing to undermine the film’s enjoyability. There are laugh out loud moments, and many of the original songs are earworms (Ja Ja Ding Dong, anyone?) – it makes for thoroughly amusing viewing.

It is riddled with flaws and errors, but this does nothing to undermine the film’s enjoyability.

It cannot quite fill the gaping Eurovision-sized hole in my heart, but the film’s sheer ridiculousness means it’s not a bad replacement. While I wouldn’t say it’s worthy of the coveted douze points, it nevertheless makes for light-hearted, enormously silly entertainment.