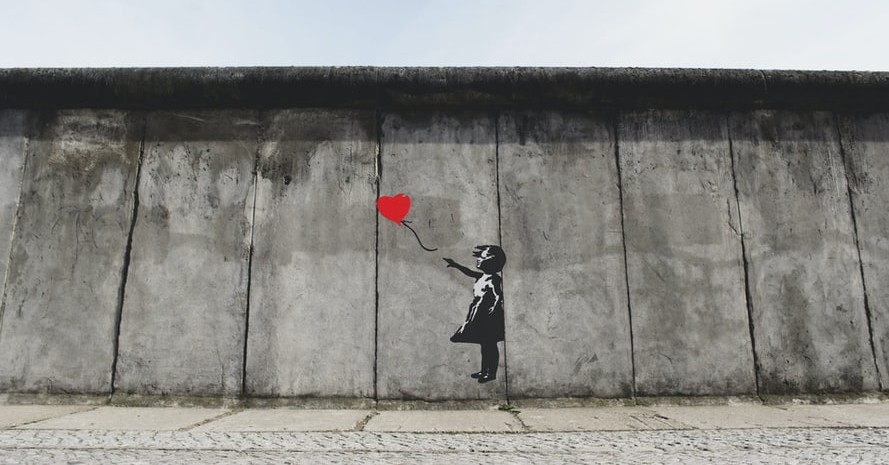 Image description: Graffiti of a girl with a heart shaped balloon, from Berlin.

Banksy’s status as a street artist will always divide audiences. The crux of the matter is that, on the one hand, graffiti is vandalism and illegal; it dirties up the clean streets and makes the whole place look untidy. That is Brendan O’Neill’s stance. The flip side of that coin is that graffiti is self-expression, political statement and satire daubed on public spaces because they do, after all, belong to the public. They are an everchanging canvas. Banksy seems to fall in between these two categories entirely these days and his most recent works evidence this. His piece in Southampton General Hospital of a boy playing with a nurse superhero doll, and his most recent piece on a TfL tube carriage, might suggest that Banksy is more conformist than he has ever been to the zeitgeist.

Of course, his works in general remain as controversial as ever. He has frequently commented on the Israeli-Palestinian conflict, the rat-run and commercialisation, Brexit, and the migrant crisis. But as his pieces gain public interest, his messages increasingly fall into the mainstream clamour of opinions. His controversial art naturally becomes less controversial. This is not Banksy’s fault. It is simply the way of things. The punk becomes part of the institution. The periphery slowly becomes the centre. It would seem that the substance of controversy, just like our public spaces, is an everchanging canvas.

The punk becomes part of the institution. The periphery slowly becomes the centre.

One of Banksy’s own work states: “If graffiti changed anything, it would be illegal,” but he is his own contradiction. His work is often a starting point for conversation and question. Most graffiti is illegal and is largely painted over or pressure-washed off but Banksy’s work is lauded, framed, signposted. In Bristol you can even go on a Banksy street art tour. Banksy has fallen victim to the very commercialisation he rails against in his work. Banksy’s own graffiti is not illegal. He has hosted exhibitions in the early 2000s such as Existencilism, “an Exhibition of Art, Lies and Deviousness” which was curated by 33​1⁄3 Gallery. And, although he does so no longer, Banksy has sold official print reproductions of his work and has even directed his own documentary films including ‘Exit Through the Gift Shop’, a documentary nominated for the Academy Award for Best Documentary Feature.

Banksy profits from his work in a way that traditional, extracurricular graffiti artists simply do not because they operate outside the accepted confines of the art world. Inevitably, then, this means that Bansky operates within the establishment and thus as an individual is no longer as controversial as his art. However, whilst the establishment’s acceptance of Banksy’s work does not detract from his central messages, the commodification of his work certainly undermines his anti-commercialisation, anti-capitalism stance. This gives the impression of becoming part of the establishment but in reality, the establishment has tried and is succeeding, without Banksy’s consent or co-operation, to bring him into the fold and reduce his jolt-free questioning.

Banksy has fallen victim to the very commercialisation he rails against in his work.

Banksy’s recent work scrawled across a tube carriage is very much in line with current government and social ideas: wear a mask for public safety. This could certainly be considered as toeing the party line, but Banksy has never adhered to what was necessarily popular. He has painted what he wanted, and this has happened to fall into the popular feeling of the moment. For O’Neill to dismiss Banksy therefore as a government artist is to interpret Banksy’s pro-NHS statement as being actively supportive of one part of policy over another. Banksy is not necessarily being political right now. He is showing support for the NHS, a sentiment in these times largely unopposed across the land. His work can be interpreted as signposting support for an issue, strongly supported now but likely to become divisive later down the line.

Banksy has never adhered to what was necessarily popular. He has painted what he wanted.

Banksy has always been very much his own artist. Are these very mainstream topical artistic outbursts what we need in these dark days of coronavirus? I am not entirely sure they are. The publicity for mask-wearing and NHS-thanking is already widespread and fairly effective. Other issues from homelessness to right-wing extremism are still present. Corona has not removed them as concerns, it has simply refocused the spotlight onto itself. If Banksy wanted to continue to be as controversial as possible, he might do better to resume highlighting themes present in his previous work. Some may feel that long-term support for the NHS is essential for the upcoming healthcare funding battle that is likely to come, except Banksy’s tube art was not permanent.

The impermanence of Banksy’s most recent work is perhaps the perfect anti-establishment accompaniment for his seemingly politically tepid statement. Once again Banksy inhabits the fine line between controversial and mainstream, establishment and outsider. TfL has apologised to Banksy for the removal of the graffiti, citing that they had not known it was his. The subtext of this is that if they had, they would have left it up. They have since invited Banksy to install a new piece somewhere more permanent. Time will tell how Banksy responds. To accept seems to me to be an acceptance of his subdued, institution identity; to refuse would be to cling on to punk just a little longer. Ultimately for me however, Banksy’s quintessential ‘fuck you’ to the mainstream is in danger of becoming altogether too polite.