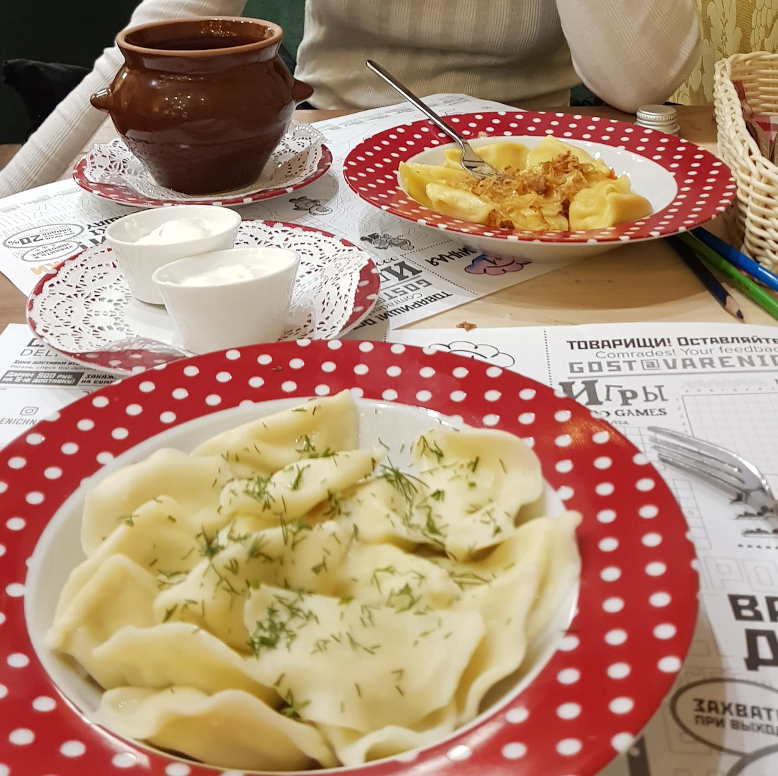 Image description: Two plates of dumplings, on a table.

Food in the Aosta Valley, where I spent a big part of my year abroad, is a reflection of the cow-filled, mountainous land situated between France and Switzerland in Northern Italy. Mountain climate and culture requires big meals; I stayed with a host family and we would always have pasta before a main dish – a shock as pasta was always enough to be my main course, so I quickly learnt to portion myself to be able to eat everything.

This soup’s title is in Aostan patois (a prominent French dialect in the region) but refers to a locality or valley of the Aosta Valley: Valpellinzese = from Valpelline. It is a hearty soup, which sounds like an oxymoron but Valdaostans play fast and loose with the word soup. Zuppa alla valpellinzese starts with a beef broth and cabbage with thick slices of bread in the soup. Bread in the soup? Granted there were bigger culture shocks, but as someone relatively British I thought bread went on the side. There was no side business there. The bread is thoroughly incorporated.

What follows is Fontina, the pride and joy of the Aosta Valley, a nutty cheese that melts really well and has DOP status. As with many Italian ingredients there was constant debate over the best one – every few weeks, unprompted, I would get different recommendations of where to get it. Over one Sunday lunch, where I got taught to make Zuppa alla valpellinzese, I also learnt which are the best cows in the region to make good Fontina – so if you are ever in the Aosta Valley and are on the lookout for good cows, let me know.

Going to live in a provincial Russian city, I expected a lot of things – mainly very cold weather and an abundance of vodka – but I did not expect to fall in love with Russian food. Arriving only knowing the Russian for ‘bread,’ ‘milk’ and ‘mushroom,’ I had very few preconceptions of Russian cuisine.

Soon after arrival, we visited a little restaurant called ‘Podbelka,’ a traditional pelmennaya selling pelmeni, Russian dumplings. Made from a simple unleavened dough of flour, eggs, salt and water, and traditionally filled with meat, pelmeni are vaguely reminiscent of ravioli, and I quickly became obsessed with them. My favourites were filled with salmon and cheese and dipped in a spicy Georgian tomato sauce called satsebeli, although their mushroom pelmeni, so smoky they could almost be meat, were a close competitor.

Sat in the restaurant on Russian Orthodox Christmas day, while our fellow diners became increasingly merry, drinking and listening to live jazz, I accidentally ordered sweet pelmeni. I was a quick convert. Crammed full of poached apples and drizzled with a caramel glaze, they are very rich, so be warned if you ever try them – they are so hearty you won’t want to eat again for a while! With pancakes or blini exceptionally popular in Russia, I was also converted to condensed milk as a go-to sweet pancake filling, abandoning a life-long attachment to Nutella. I even developed a taste for cheese and mushroom savoury blini, a concept I previously felt missed the point of pancakes! Soup also became a warming favourite, with borscht, beetroot soup, or shchi, a cabbage and potato broth, a regular fix at the start of a meal.

While my expectations about the weather never came true (last winter in Russia was one of the warmest on record), those about vodka drinking did not disappoint. With whole isles of the supermarket lined with hundreds of different vodka brands, vodka’s popularity was hard to ignore, although even after eight months in Russia I still find it too bitter. Despite failing to develop a taste for vodka, I discovered so many new favourites in Russia – in the many boring moments of lockdown, I often thought about pelmeni and blini and wished I could go back!