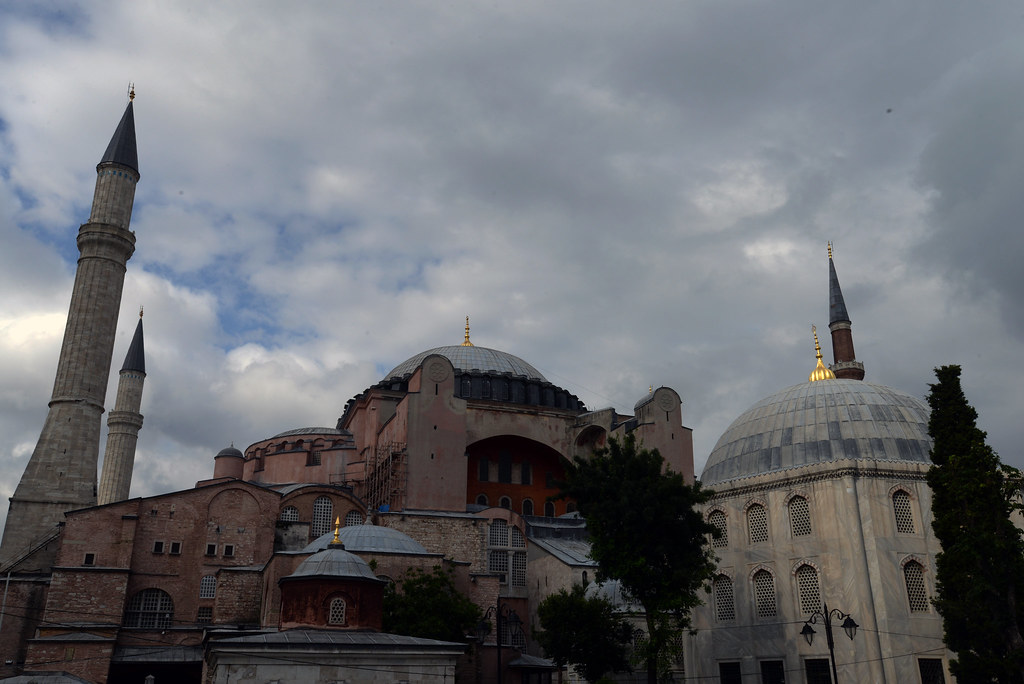 Monuments and heritage: on Hagia Sophia

The place of monuments, especially commemorative statutes, has become a highly charged debate recently. Their uses and place in our understanding of ourselves and history has come under scrutiny and rightly so. Monuments traditionally offer an idea of stability by providing an immortalised snapshot of history. This can then be interpreted in a variety of ways with emphasis placed on the thoughts or ideas of the time, the artistic style, or the event it is commemorating such as a victory.

What this does is provide us with a comforting status quo and more often than not reinforces an historical narrative the majority feel comfortable with, whether it is accurate or not. As humans and storytellers, we love the tale of the underdog who wins against Goliath and we look for individuals to role model this. We gain a sense of ourselves from our monuments in a more immediate way than perhaps a textbook. We wear our monuments as a badge of honour – that is the idea anyway. The reality is that many of our commemorative statues and monuments are covered largely in bird poo whilst the triumphant pigeon stands atop cooing proudly as we wander past. Many were erected years after their subject lived and serve to further a idea of our past that we wish to become mainstream in our consciousness – true or otherwise. We take little notice until we are forced to confront our past through these memorials to history.

We wear our monuments as a badge of honour. That is the idea anyway.

Turkey’s President Erdogan’s decision to re-Islamise the Hagia Sophia poses a different set of questions for other memorials and certainly the ones making headlines in British media recently. The Hagia Sophia has not been a stable monument in the way many others are. It began as an eastern Orthodox Cathedral before being converted into a Roman Catholic Cathedral by crusaders in the 13th century, then returning once again to its Orthodox origin. In the 15th century it was converted into a mosque by Mehmed II and remained as such until 1935, when Ataturk designated it a secular museum in line with Turkey’s secular constitution.

In many ways the Hagia Sophia is in a unique position because it is continuing its habit (or rather Turkey is ensuring it continues the habit) of politicising the Hagia Sophia and using its past to prop up a modern image of Turkey. In this case it is the image of a new qasi-Ottoman state, fulfilling the dream of a proportion of Turkey’s 98% Muslim population and certainly the dream of President Erdogan. In a peculiar paradox, its constant shape-shifting allows the Hagia Sophia to fulfil the constancy so desired in a movement. The constant movement ensures that this monument is not the ignored statue familiar in our city centres but remains at the heart of public debate and identity.

We gain a sense of ourselves from our monuments in a more immediate way than perhaps a textbook.

In response to the unparalleled move by Turkey, UNESCO has reiterated that there must be a consultation process before any such monument or world heritage site’s status is changed, which Turkey has ignored on the grounds that the Hagia Sophia is Turkey’s and it retains its right to sovereignty over its land. In the longer term, it suggests that (contrary to UNESCOS’s mission statement of ‘World Heritage sites belong to all the peoples of the world, irrespective of the territory on which they are located’), countries can, if they feel so bold, manage their own cultural and historical sites independently from other bodies and international concerns.

The wider impact of this could mean the undermining of a global network and ideal of cultural movement and sharing and suggests perhaps a move towards insular politics and cultural identity. Whilst this is certainly a concern, many monuments or heritage sites are unlikely to be polemicized any time soon because out of the over 1000 sites belonging to UNESCO, only a small proportion remain as working religious sites or indeed offer the same level of identification with nation, religion or peoples and their history as the Hagia Sophia does. Ultimately however, President Erdogan’s move to reinstate the mosque status of such a cultural and religious symbol for people around the world suggests that the use of monuments as political pawns for power grabs or consolidation domestically and internationally is legitimate, and highlights an increasing move towards a shutting down of the international community.

This new wave of isolation and self-exclusion from the international common table is symptomatic of a new wave that is making steady progress. The desire for a country to retake its sovereignty and to fulfil a new destiny. That it how it is projected. In fact, it is a case of severe anemoia; a desire to return to a past you never experienced. Examples can be seen in Trump’s slogan of ‘Make America Great Again’. Which part of America supposed ‘Great’ history does Trump want to return to? Similar nostalgia was seen during the Brexit campaign with a desire to return to a supposed simpler time where we had greater sovereignty and were key players in international affairs. Turkey too has been on this road for some time. In 2019, the same court that delivered the verdict on the Hagia Sophia declared that Chora, another Byzantine Church should have its mosque status reinstated. Similar buildings in Iznik and Trabzon were also turned back into functioning mosques in 2011 and 2013 respectively.

… its constant shape-shifting allows the Hagia Sophia to fulfil the constancy so desired in a movement.

Hagia Sophia is part of a wider re-Islamification of Turkey, yet it is this monument rather than those others that has captured international attention. This is because for many, the Hagia Sophia represents a multifaceted section of international history that more than just Turkey feel connected to. The Hagia Sophia’s new identity brings to light national narratives of control and highlights the growing danger that monuments can pose to international working relationships when manipulated for shorter term political gain.