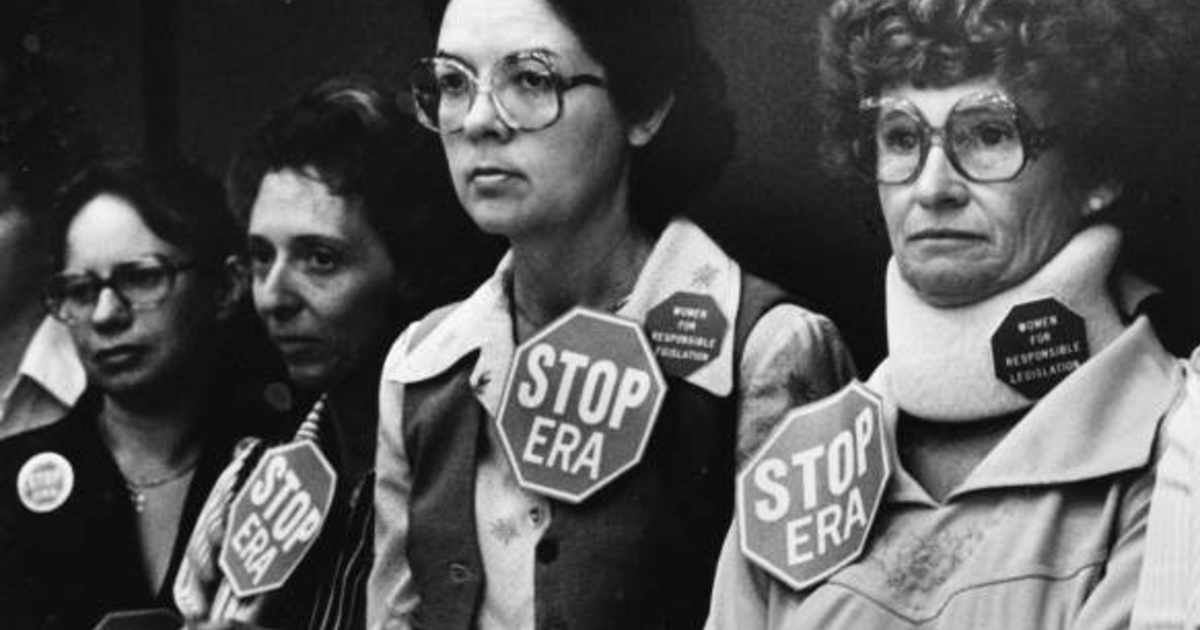 A force to be reckoned with: Mrs America reminds us that the feminist battle is far from won.

Image description: a black and white photograph of a group of women wearing ‘stop the ERA’ badges

‘Feminism is doomed to failure because it is based on an attempt to repeal and restructure human nature.’

Ah, I can almost hear you thinking as you visualise the scene. We’re at a Trump rally, or a Fox News bulletin, or scrolling through Reddit or an echo-chamber punctured Facebook.

Except this isn’t 2020. This is the USA of the 1970s, and while the soldiers may be different, the battle is exactly the same. If you think of the ‘60s as the zenith of US social liberalism — Civil Rights! Hippies! Social Security! JFK! — and the ‘80s as the reign of Reagan, then the ‘70s could be characterised as a transitional era, a time of both reform and reaction, when the battle lines of politics, culture, and society were scrubbed out and redrawn over and over again.

Mrs America, Hulu’s timely new miniseries now showing on BBC iPlayer, dramatises just one of these fights, and one that encapsulates the shifting ideologies and identities of the decade — the failure by the feminist movement to secure the ratification of the Equal Rights Amendment (ERA). Nearly half a century on, the amendment remains shelved, a damning testament to the political culture of a country which managed to instate and repeal Prohibition within twenty-five years.

Each episode of the nine-part series turns the camera on a key player of the battle over ERA, with a running focus on the arch-nemesis of the Women’s Liberation Movement, Phyllis Schlafly (Cate Blanchett). A Republican who’d campaigned for Barry Goldwater, Schlafly waged her war at the head of her organisation STOP ERA. Blanchett is the show’s standout performance, the perfect blend of elegant and reptilian as she swans around Schlafly’s picture-perfect suburban home and the marbled streets of DC with a fragile grace that seems always on the edge of shattering into fury, and a pastel wardrobe that conceals her shrewd interior.

Blanchett is the show’s standout performance, the perfect blend of elegant and reptilian

Rather than turning Schlafly into a simple villain, Blanchett’s portrayal is nuanced, conjuring an unexpected sympathy as well as the head-shaking disgust I anticipated to feel. Men speak over her, ignore her, and ask her to take notes at meetings she, a highly educated woman with a long political career, is overqualified for. She hosts conferences and rallies, then comes home to cook and clean for her husband and six children.

After returning from a long trip we see her pressured into sex with her overbearing lawmaker husband, a scene undoubtedly tied to her comment ‘by getting married, the woman has consented to sex, and I don’t think you can call it rape’. Of course, these private exchanges are fictional extrapolation, but we rarely ask where such virulently antifeminist opinions come from — why was Schlafly, as many second wave feminists labelled her, a traitor to her sex?

Mrs America reminds us of what is often forgotten. Schlafly too was a victim of the patriarchy, a poster-girl for Betty Friedan’s ‘problem that has no name’ — the enormous discontent felt by middle class suburban housewives in the post-war years. The show has been controversial for this very reason — humanising the women whose views might not just be described as arch-conservative, but as abhorrent. But I think it’s one of its greatest strengths. By showing Schlafly in a light which — at times — borders on sympathetic, the flaws in her arguments against ERA (as well as on a host of other social and cultural issues which still engage us today) are easily exposed.

In the age of fake news and Facebook, it allows us to see how easily people can become radicalised, and come to conflate opinion and rumour with truth. As a debate between Schlafly and feminist constitutional lawyer Brenda Feigen Fasteau (Ari Graynor) (based, as with much of the show, on real dialogue) demonstrates, her arguments simply floundered in the face of the facts. But they were still believed by her and many others.

It allows us to see how easily people can become radicalised, and come to conflate opinion and rumour with truth

Schlafly’s adversaries in the show are almost all real historical figures with vital roles in the Women’s Liberation Movement. Gloria Steinem (Rose Byrne) and Betty Friedan (Tracey Ullman) are the best known, as is Shirley Chisolm (Uzo Aduba), the first black woman to run for president. But most viewers won’t already know about Feigen Fasteau, or Jill Ruckelshaus (Elizabeth Banks) who tried to set the Republican Party on a more moderate, liberal path. I almost wish these lesser known women had been given more airtime in the show, but they’re never sidelined as dramatic characters or as important players in feminist history. The show is brilliantly cast, and each actor brings the different women’s struggles and successes alive with care and impassioned skill.

Feminists are ‘no fun’, Schlafly primly condemns before a cutscene takes us to a glamorous New York fundraising party hosted by Steinem, which frankly looks like my definition of a whole lot of fun. Yet the show is no postfeminist consumer fest, and does not spare the watcher the constitutional law, legal cases, or machinations of the electoral college and state politics. Mrs America is fun, though, and set to a stellar ‘70s soundtrack which whisks you back to the age of vinyl.

Steinem herself has accused the show of overplaying Schlafly’s role in the battle over ERA, stating at the virtual Hays Festival that ‘the series makes it seem as if women are our own worst enemies, which keeps us from recognising who our own worst enemies are’. There’s a hint of truth in this, and at core, Steinem is right; both anti-feminism and the seeds of tension burgeoning within the feminist movement itself were — and still remain — sown by oppressive structures of patriarchy and the socialisation of women. But women can perpetuate the patriarchy just as much as men can; news of Kellyanne Conways or Ghislaine Maxwells fills the airwaves today. Viewing the show through the critical perspective of a historian is a reminder that one of the biggest issues with second wave feminism was its lack of intersectionality and inclusivity. Overwhelmingly white, middle class, and educated, feminist organisers didn’t necessarily actively discriminate against minority women, but they didn’t always represent and understand them either.

One notable moment in Mrs America is a Ms meeting when Margaret Sloan-Hunter (Bria Henderson), the black lesbian co-founder of the magazine, suggests an article on minority tokenism. An awkward exchange follows, where Steinem and the other editors don’t realise they’re putting up barriers against her, but are. This scene may be fictionalised, but you just have to look at the struggles faced by minority feminists such as Sloan-Hunter and Shirley Chisolm, as well as LGBT and working class activists like Kate Millet.

The problems second wave feminism sought to address still plague modern society, equally, the problems that plagued second wave feminism still run rife in today’s activist movements. How to make everyone’s voices heard. How to fight an adversary peddling misinformation and fear. How to change a world built on deeply entrenched inequality and oppression. Mrs America is a timely reminder that the battle for a fair society is far, far from won. After finishing the first episode, I turned over to the Ten O’Clock News to hear the grim spectre of Donald Trump rile against political rivals and activists alike. Before her death in 2016, Phyllis Schlafly found time to endorse the President’s candidacy. It’s not hard to imagine her smiling in her grave.

Mrs America is a timely reminder that the battle for a fair society is far, far from won

As Mrs America suggests, we’ve come a long way since the 1970s, but we haven’t come anywhere near far enough.

There is still so much work to be done.