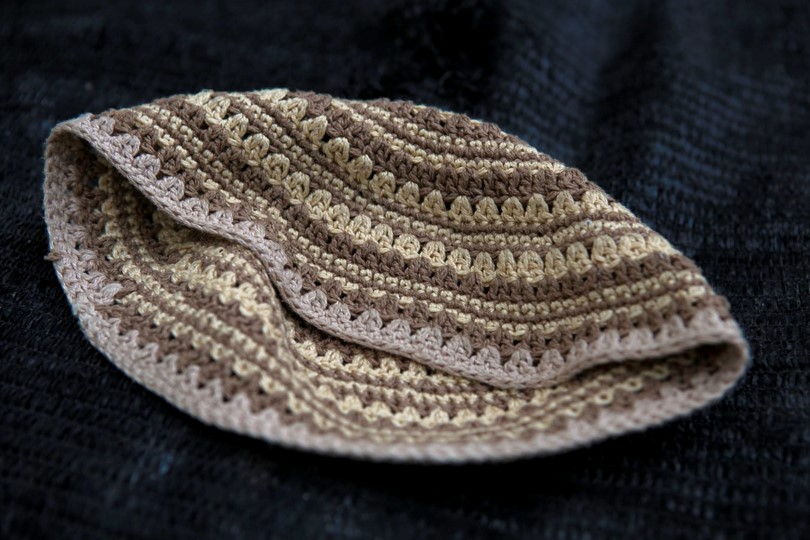 Image description: a Jewish Yamaka against a black background.

In recent days, disturbing reports have come out of war-torn Yemen. That is nothing new. These days, it is strange for a report from Yemen not to be disturbing. Yet this recent news will probably go unreported in the West. Because the subject of this news is a tiny community. The remnant of a community.

On August 16th, The Jerusalem Post reported that Yemen’s remaining Jews, the remains of an ancient and once-thriving Jewish society there, now estimated to be roughly 50-100 in number, would be transferred to safety in the United Arab Emirates. A source in the Yemeni Jewish community had told the pan-Arab newspaper Al-Araby Al-Jadeed that the Iranian-backed Houthi rebels had forced the country’s remaining Jews to sell their land and homes for a low price.

Such actions are unsurprising for the Houthis, part of whose slogan is “Curse the Jews”, and who were rumoured in July, in unverified reports whose authenticity was questioned, to have initiated ethnic cleansing of the Jewish population. Those reports claimed that the Houthis were rounding up and imprisoning the Jews, were pressuring them to leave, and had cut off their water and electricity. The Houthis were also said to have banned the Jews from purchasing food. Israel’s Foreign Ministry claimed that these reports appeared to be false.

Nonetheless, July’s rumours presaged the recent news from Yemen. On August 20th, another chilling report was published in the Post, from news agency The Media Line: the Houthis are ordering at least some of the remaining Yemeni Jews to leave. Details of persecution, of Jews having their movements restricted, of Jews being arrested, were included in this report. One particular detail was no surprise: Ali Qudair, a tribal chief in the Amran Governorate, related that Houthi soldiers had entered a Jewish house and, amongst other questions, had asked about the inhabitants’ supposed links to the State of Israel.

It is fitting that the stamping-out of the last Jews in Yemen should be conducted with much the same method as the ethnic cleansing of ancient Jewish populations from not only Yemen, but also the rest of the Arab world, in the mid-20th Century. For the Houthis’ implicit smear against these Jews is that in daring to exist as Jews, they must be Zionist foreign agents. This was the justification often used to drive Sephardi (North African) and Mizrahi (Middle Eastern) Jews out of their homes in the years preceding and accompanying the founding of Israel in 1948.

The wholesale ethnic cleansing of Mizrahi and Sephardi communities, from Iraq to Egypt, from Tunisia to Libya, is a sordid episode in the history of the region which has been cynically ignored by the world.

In those dark years, as the Holocaust and its aftermath engulfed Jews like my family in Europe, their cousins – my cousins – the Mizrahim and Sephardim were violently and ruthlessly ejected from the places they and their ancestors had called home.

With nowhere else to go, these dispossessed Jews sought refuge in the land of their forefathers, Israel. As of 2009, roughly 50% of Israel’s Jewish population was Sephardi and Mizrahi. Yet these are Jews largely unknown to Westerners.

One million Jewish refugees were driven from nine Arab countries and Iran during the 20th Century. The governments and peoples which pushed them out did not just aim to destroy their lives. They aimed to destroy the brilliant history of Jews in the region. Jews had lived in Iraq ever since Nebuchadnezzar’s Babylonians exiled them from their homeland in the 6th Century BCE. There, the Farhud, a bloody Nazi-influenced pogrom in 1941, was an early episode in an ever-mounting persecution. The Farhud slew nearly 300 Jews and injured more than 2000. Sporadic violence made it impossible for Iraqi Jews to stay and initiated their flight to Israel.

When, in 1948, Iraq went to war with the new State of Israel, Zionism was criminalized, leading to further state-sponsored persecution. Yet more Jews fled to Israel in great numbers, until, in 1952, Iraq banned emigration. In 1969, nine men were hanged as an alleged “spy ring”. Today, there are fewer than ten Jews in Iraq. That is the story of just one community. Similar stories unfolded in communities across the region, ruining lives and desecrating a unique culture. These were stories of thorough dispossession, usually sponsored and promoted by antisemitic states, hellbent on ridding themselves of the Jews.

This is the story of Yemen too, a story of a once vibrant Jewish community, smashed to pieces in the 20th Century. For millennia, perhaps as early as the time of King Solomon, Jews flourished in Yemen, despite prejudice and oppression. They developed a rich culture of their own. The 17th Century’s Rabbi Shalom Shabazi, for example, wrote a celebrated canon of 850 poems. He was revered by Jew and non-Jew alike.

As early as 1922, the flames of hatred were being fanned in Yemen: an old law was invoked, forcing all Jewish orphans under 12 to be converted to Islam. When the UN partition plan for a Jewish and Arab state in the British Mandate of Palestine was announced in 1947, a pogrom swept through the port of Aden. It killed an estimated 82 Jews, destroyed nearly all the Jewish shops and four synagogues.

From 1949-50, Israel airlifted the vast majority of the Yemeni community to safety. There, the Yemeni community remain a cultural powerhouse. Now, in the 21st Century, the minuscule remaining fragment of Yemen’s Jews is being crushed, using the same excuses as seventy years ago. Yet again, the same “anti-Zionist” antisemitism is fulfilling its evil role.

Yet again, Jews are being put to flight by hateful zealots and murderers in one of the cradles of Jewish civilization and history.

There is a vile irony to the Houthis’ actions, and those of their predecessors in the 40s and 50s: the same hatred which says that a Jew cannot be a loyal citizen in the countries of the Diaspora, and does not deserve to be an equal citizen, also claims that Jews have no place in Israel, the land of our indigenous roots and the birthplace of our nation. The handful of Jews who, if these terrifying reports are to be believed, are being hounded out of Yemen, are the latest victims of this murderous catch-22. They are the victims of the pernicious hatred which says that there can be no refuge, no rest, no human kindness for a Jew.

When the brothers and sisters of these Yemeni Jews were being expelled all those decades ago, the world did not care. This time, as the latest chapter in the persecution of Mizrahim is written in plain sight, it is time to end the erasure which says that Jewish suffering began and ended in Europe and forgets the Jews of the Middle East.