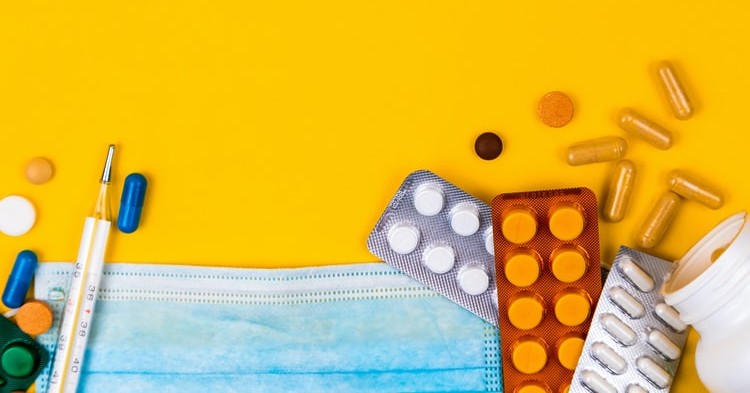 The government’s ‘Moonshot’ testing scheme, announced this week, is aiming high: 10 million tests a day, 15 minutes for a test to be returned, £100 billion price tag. But the UK is currently so far from the Moonshot ideal the plan sounds nonsensical. And there’s no point to it – or to any kind of Test and Trace system – if people can’t afford to quarantine themselves.

Widespread testing is a much-touted alternative to both herd immunity and national lockdown: in theory, it should allow transmission chains to be broken, and allow the country to get back to some semblance of normality. Testing should allow positive cases to be isolated immediately, preventing them from spreading the virus; contact-tracers then identify those with whom they’ve been in close contact, and these people, too, isolate, meaning the virus is driven to low levels very quickly.

If sufficiently fast and numerous, tests would allow schools and universities to function as normal, testing students frequently and requiring negative tests for class attendance. Bars and pubs could similarly require negative tests; workplaces could reopen; theatres and cinemas could welcome full audiences.

Statistics released by Public Health England show the lack of progress made on testing. Test results take long periods to return, which almost prevents them from being at all useful: it’s unrealistic to assume people will simply isolate themselves while waiting more than 80 hours for a test to be returned. Getting a result in 15 minutes – a keystone of the ‘moonshot’ proposal – would be useful when deciding whether or not to go into work, school, or to a bar. But currently median test times are nowhere near this level, as shown below: 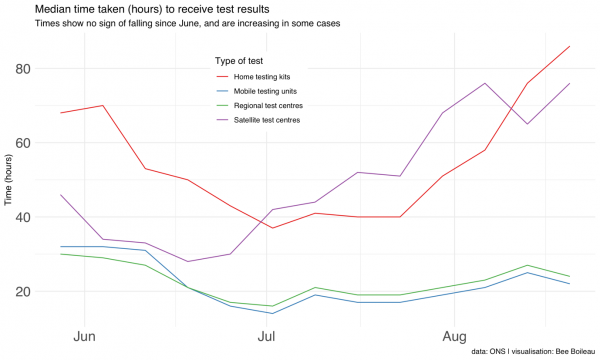 As I write, COVID tests are unavailable, even though testing sites have capacity, since laboratory processing is too slow: the NHS director of testing apologised for this on Tuesday. Those who sign up for tests are being asked to travel hundreds of miles, despite there being space nearby. If laboratories are unable to handle testing at a level of 150,000 to 200,000 tests per day, it’s difficult to imagine 10 million tests per day under the ‘moonshot’ scheme. Contact tracers are unable to reach a large proportion – above 30%, last week – of positive cases’ close contacts, significantly reducing the impact of finding each case. 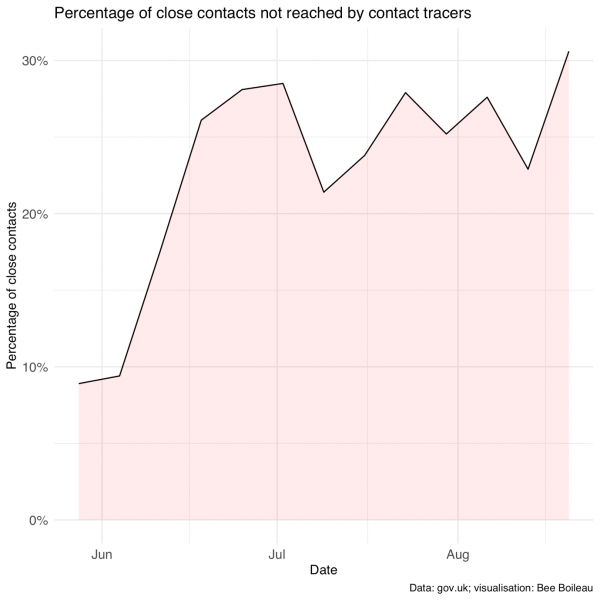 Even if the technology existed for the ‘Moonshot’ scheme – which the government has admitted it doesn’t – it seems unlikely the UK has the state capacity to implement anything like it, given the current state of testing. It’s unimaginable that 10 million tests a day, locally accessible, yielding results in 15 minutes, could be available before Christmas.

Beyond the failures of our current testing system, though, can people afford to self-isolate? This is absolutely crucial: no matter how effectively the testing system works, there’s no point to it if people are not financially able to take two weeks off.

A report from Imperial, published in April, implies that financial issues will pose a barrier to effective testing. The paper finds that willingness to self-isolate is high among all UK adults, but those with the lowest household incomes are three times less likely to be able to self-isolate. Studies on a larger sample size, conducted by YouGov, find that the UK population is significantly more likely to be willing than to be able to quarantine: this is especially striking because not broken down by income, meaning the effect is likely to be significantly stronger among lower-income workers. As shown, the proportion ‘unwilling’ to quarantine hovers between 0 and 10%. The proportion who would find it difficult to manage, though, is closer to a quarter of the population. 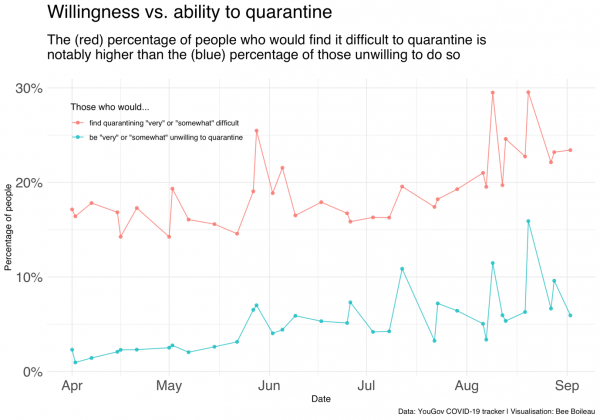 Statutory sick pay is technically provided to those self-isolating. But those who earn less than £120 a week are ineligible. According to the ONS, 1,766,000 people earned below this figure in 2019, representing 6.6% of all employees. Like many aspects of the pandemic, moreover, it disproportionally affects women: 70% of those ineligible were female. The self-employed – not included in employee statistics – are also unable to claim support, an additional 4.8 million workers.

Statutory sick pay itself is not enough to live on. It comes to £95 a week, only about a fifth of average weekly earnings. A study from BritainThinks shows that 43% of workers would be unable to pay their bills if given this amount. The government is trialling a scheme in which low-paid people are paid up to £182 per week: even this, though, is paltry. People should not be forced to choose between paying their bills and cooperating with test-and-trace; it’s likely that they won’t cooperate. 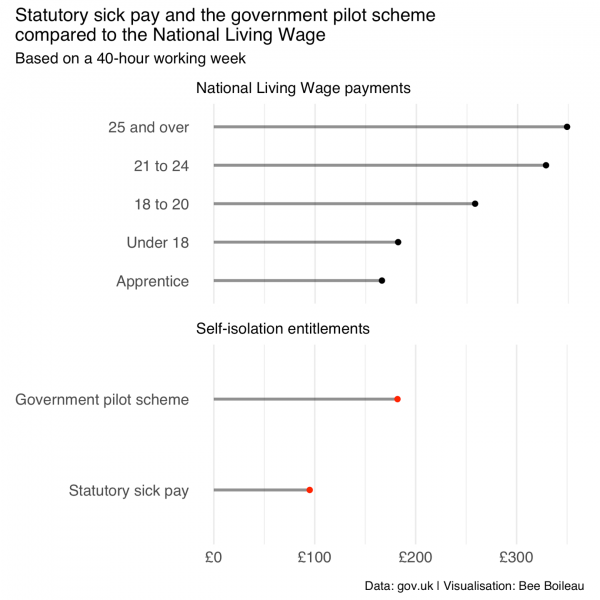 In Germany, quarantined people are paid their usual wage. In South Korea, those self-isolating due to contact with a positive case were called twice daily by a public health officer, and delivered ‘comfort packages’ from the government, which included fresh produce. In China, those asked to self-isolate have their rent, food, and bills covered. All this is both sensible in economic terms – the amount of money the government would spend is trivial compared to the amount the self-isolation-induced depression is costing the country – and in moral terms, preventing the most socio-economically disadvantaged from being forced to risk their lives. The UK has one of the least generous mandatory minimum sick pay allowances in Europe: we can afford to be more generous.

Cases are most prevalent within more deprived local authorities, according to Public Health England’s data. This makes sense, since those with the lowest household incomes are six times less likely than their more affluent peers to be able to work from home, and are significantly more likely to be in crowded accommodation, where the virus spreads fastest. As the graph below shows, areas with low ranks on the ONS’ index of multiple deprivation – indicating high rates of poverty – have higher positive COVID tests, on average. The challenge there isn’t testing better: it’s allowing COVID-positive inhabitants to afford to isolate. 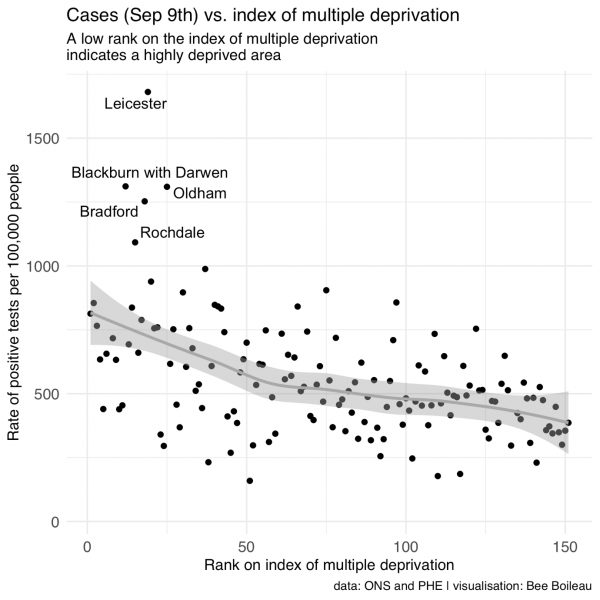 Even if we’re able to develop testing significantly beyond its current level, testing isn’t a magic bullet. In order to slow the spread of COVID, and return things to normality, people have to respond when told they’re tested positive. Without more financial support, it’s unlikely that they will.