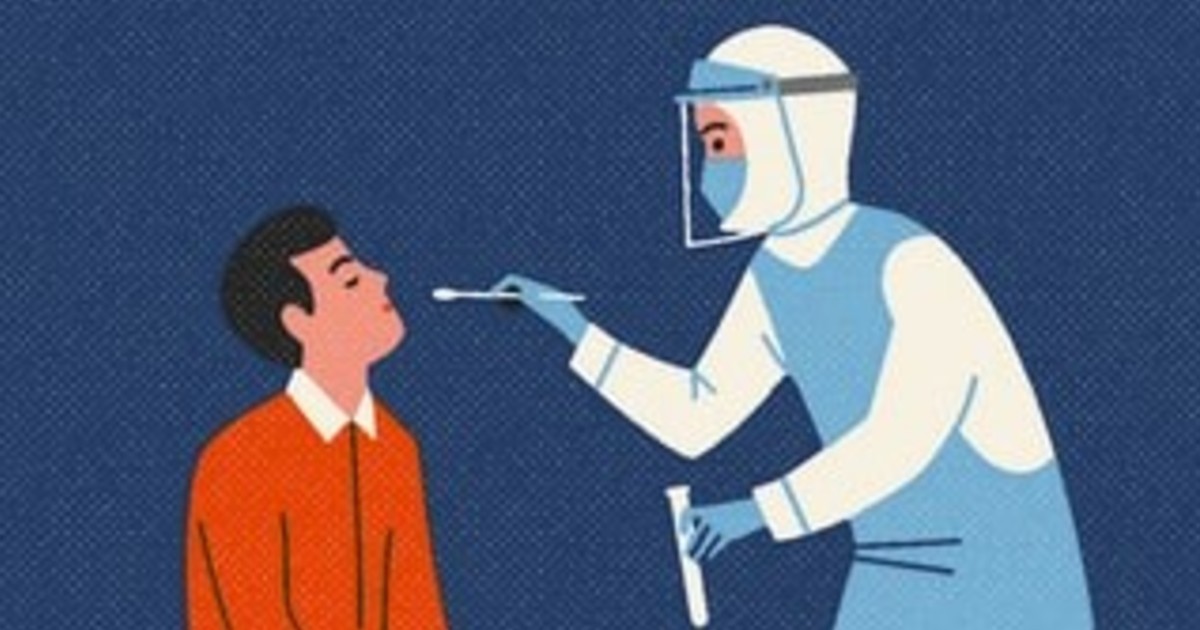 Why we should be testing asymptomatic people

Image description: a cartoon character getting a coronavirus test.

Matt Hancock said last Wednesday that around 25% of those seeking COVID-19 tests were ‘not eligible’, complaining of a ‘rise in the number of people who are not eligible’. Those who don’t have symptoms, he warned, should not be tested. The government website has also added a new message on its online booking system, telling people that ‘ordering unnecessary tests is wasting NHS resources’, and warning them only to continue if they have coronavirus symptoms.

But in July, he advised getting a COVID test ‘if you have any doubt’. saying that ‘anybody who needs a test can get a test, and it’s the most important thing that you can do to stop the spread of this virus’. He warned about the dangers of asymptomatic transmission in June, citing a survey suggesting 80% of those who tested positive didn’t have symptoms: according to him, this was ‘significant, and one of the important things about this disease.’

Beyond the fact that the government has clearly U-turned, then blamed people for listening to their previous advice (a pattern replicated in many areas, from going to work to eating out), Hancock’s new advice is dangerously misguided. Testing only symptomatic people undermines contact tracing, a crucial part of the test-and-trace scheme. It’s also not the best way to allocate limited tests, if the goal is to reduce the spread of COVID in the wider population.

This is risky: studies have shown that ‘viral load’, a measure which correlates with how contagious COVID cases are, is highest amongst pre-symptomatic individuals. One Nature study from April estimates that 44% of cases were infected by those without symptoms, warning of the danger of ‘substantial pre-symptomatic transmission’. One primary cause of the COVID epidemic in UK care homes was asymptomatic transmission, with the government allowing those without symptoms to be discharged from hospitals into care homes; more than 80% of those who tested positive in care homes between May and June were either a- or pre- symptomatic. The Centres for Disease Control and Prevention (CDC) in America released 5 plausible infection scenarios on September 10th, in which the percentage of infections caused by those without symptoms ranges from 10% to 70%.

Ironically, estimates of the prevalence of asymptomatic cases of COVID-19 are hampered by the fact asymptomatic people are often unable to access tests. That such a high proportion of those with positive tests were asymptomatic despite the difficulties with access, though, indicates that asymptomatic cases are common. According to the Office for National Statistics (ONS), only 16% of those who tested positive for COVID-19 between April and August showed symptoms on the day of their test, with the other 84% of positive results asymptomatic.

As Carl Bergstrom, a biology professor at the University of Washington, tweeted in response to similar changes to guidelines in the US, preventing those without symptoms from being tested seems to ‘give up any pretense of using contact tracing to control COVID’. Finding those who have been in contact with known cases becomes meaningless if those people are not offered tests. I recently argued in The Oxford Student that people can’t currently afford to self-isolate, one of the biggest issues with the government’s test-and-trace scheme. But even if they could, asking an asymptomatic person to completely quarantine for two weeks, with no access to a test, is unrealistic. Children who have already missed significant time in education, workers who cannot work from home, and those in large households – including students – would experience complete disruption

Ideally, everyone would have access to free, fast tests, which could be administered several times a week. A system like this, coupled with adequate financial support for positive cases, could allow life to return to relative normality. Widespread testing of everyone – whether or not they have symptoms – has been crucial to South Korea’s control of the outbreak, and Japan has similarly, successfully, tested high-risk asymptomatic people.

Universal testing, as detailed in the government’s ‘Moonshot’ plans, seems far out of reach. The technology, as experts have warned, ‘does not, as yet, exist’; the amount of money it would require is stupendous. It’s difficult, moreover, to imagine a system in which 90% of tests are not returned within 24 hours, a percentage increasing – not falling – by the week, transformed into one where results are available in 15 minutes.

Daniel Susskind – author of a study on optimal COVID-19 testing – is sceptical about the leaked plans, telling The Oxford Student that ‘conversations about ‘Operation Moonshot’ might be a nice idea in theory, but we’re clearly still in a world where we have finite resources.’ Determining who those finite resources go to has become the key problem, and is behind Hancock’s sudden insistence that asymptomatic people shouldn’t be given tests

But allocating tests only to the symptomatic isn’t, according to Susskind, the best way to deal with this finite-resource problem. Instead, in order to control the spread of the virus, we should be testing groups where infectivity is likely to be highest. This can be measured by R, the ‘reproduction number’, defined as the number of people, on average, each infected person goes on to infect: although R has generally been reported on a country-wide level, it can also be applied to sub-groups of the population, allowing analysis of variance in transmission rates.

Susskind emphasises that the idea that asymptomatic people should not be tested is dangerous: ‘we know you can be infectious before you begin to show symptoms,’ he says, ‘and you can be infectious even if you never show symptoms at all.’. Instead, testing should be done on those groups with the highest likelihood of infecting others: doctors, for example, who unavoidably come into close contact with others; key workers, who have been encouraged to work despite the lockdown; those who cannot work from home, such as construction workers. Dampening the spread of COVID amongst these groups would have most impact, since they come into contact with more people than average, thus potentially spread it furthest.

Paul Romer – an American Nobel Prize winning economist – has argued along similar lines, saying that testing the most vulnerable, or most likely to be positive, patients first is ‘an enormous mistake’. Instead, he has said, we should target four specific groups: health-care workers; those who maintain supply chains; potential ‘super-spreaders’; those planning to return to the workplace. Hospitalised patients suspected to have COVID should only be tested if the result would mean a significant change in their treatment, something it rarely does: scarce tests should be triaged.

Choosing who to allocate tests to does, as Susskind acknowledges, run into problems that go beyond the economic, or epidemiological, remit, becoming ‘moral – not just technical – questions’. Whose work, under a triage system, is defined as ‘essential’; who is classified as vulnerable; the priority we place on lifting lockdown restrictions – these are all questions economic models struggle to answer. And COVID is a disease of deprivation: it’s critical that any allocation mechanism doesn’t further exacerbate the inequalities already deepened.

Announcing that only the symptomatic get tests, though, takes neither ethical nor economic concerns into account. It undermines contact tracing; it’s inefficient; it’s uninformative. The risk of a second lockdown would be significantly reduced, as would the population-level R number, by testing those at higher risk more stringently, whether symptomatic or not.

This allocation problem could have been avoided: Susskind emphasises the missed opportunity represented by the first lockdown. ‘The issue should not be one of scarcity,’ he says. ‘The lockdown had three purposes. Controlling the spread of the virus; signalling that the virus should be taken seriously; and giving us a period of calm to get the infrastructure in place. A test and trace system is the most obvious part of that infrastructure’.

As long as testing capacity is rationed, it’s crucial to test asymptomatic people, in order for contact tracing to work, for transmission amongst high-risk groups to be eradicated, and for the spread of the disease in the general population to be limited. But Susskind’s research, he says, was done very early on in the outbreak. ‘By now, I hoped we would have built in testing capacity. These constraints on tests should no longer be binding.’