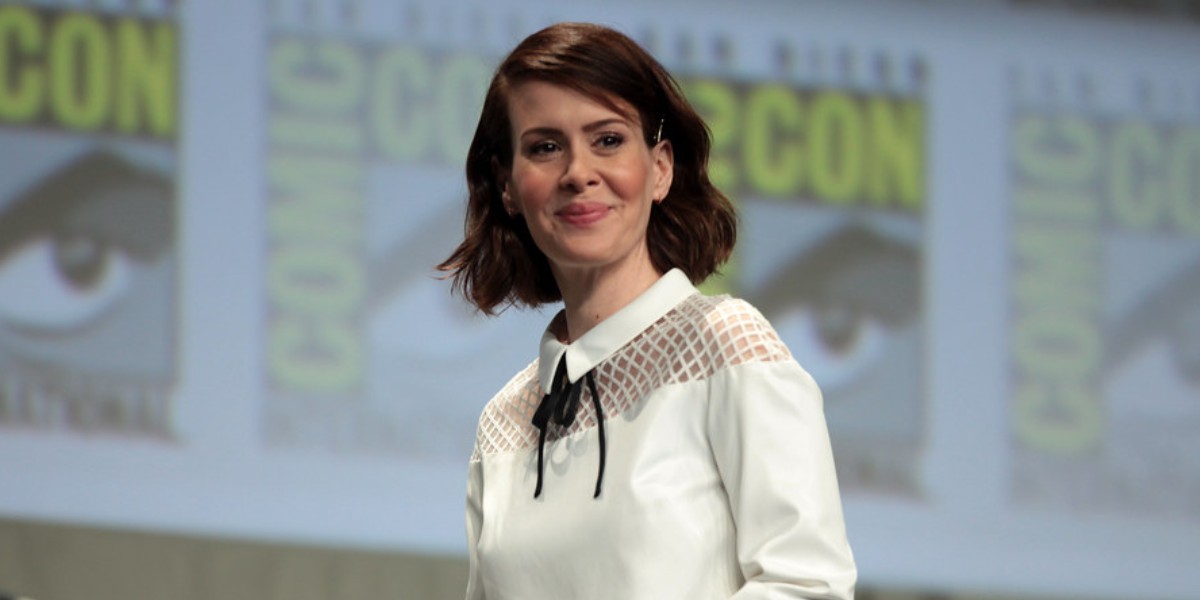 Image Description: Sarah Paulson, the star of Ratched, at the San Diego Comic Con in 2014

You’ve heard of Murphy’s Law, now get ready for Ryan Murphy’s Law: Anything that seems straightforward, black-and-white, is really more of a crazed rainbow. This adage certainly holds true in the case of the director/producer’s latest offering, Ratched. I was afraid the series would fall victim to the Murphy tendency to favour style over substance, and, sure enough, it did. But that doesn’t mean it wasn’t enjoyable.

I was afraid the series would fall victim to the Murphy tendency to favour style over substance, and, sure enough, it did.

It was hard not to feel a sense of cosy familiarity as the classic ingredients were popped into the mix: on a base of a period setting, add plenty of one-liners, a smattering of violence, a hint of hidden homosexuality, plus a musical motif or two, and you’ve got yourself a bona fide Murphy concoction. Ratched had the glossy 40s costumes of Hollywood. It had the political intrigue of The Politician. It had Finn Wittrock enter a priests’ house in the opening scene on a similar pretence to the home invaders in season 1, episode 2 of American Horror Story. We even see Sarah Paulson’s character accused of being a journalistic ‘vulture’, just as she is in AHS season 2 – although on this occasion, she is a nurse, and makes a point of refuting the avian allegation. I’m keen to give Murphy the benefit of the doubt and assume these details were nods to long-time fans rather than evidence that he’s running out of ideas. As I’ve noted, it felt strangely comforting to be back in his campy, psychotic world again.

One of critics’ most oft-cited issues with Murphy is that he can’t seem to help but give a ‘tragic backstory’ to every foe that features in his work. Undergoing ‘Operation Empathy’ in Ratched is the eponymous character who first appeared as a foil to Jack Nicholson’s protagonist in One Flew Over the Cuckoo’s Nest. In this case, however, I’m inclined to argue that the ‘tragic backstory’ criticism isn’t really a fair one to make.

First of all, I’m not convinced Ratched ever was a villain in the true sense of the word. I hadn’t seen One Flew Over the Cuckoo’s Nest prior to the 2020 series being announced, but I made time to watch Louise Fletcher’s interpretation before witnessing Sarah Paulson in the role. And you know, I ended up feeling somewhat sympathetic to the character. Fletcher’s nurse’s passive-aggressive policies seemed not much worse than those of a real-life strict schoolteacher. I appreciated her deft changing of the subject when Nicholson made a younger orderly feel uncomfortable by droning on about his erectile functions. Let’s not forget that the reason he was in there in the first place was for having sex with a 15-year-old.

Perhaps because she does not conform to feminine, maternal stereotypes, Fletcher’s Ratched is often lazily pegged as a ‘nasty woman’ scapegoat. She is considered directly responsible for the evils of the wider system, rather than simply being emblematic of them. As a nurse figure whose supposedly nurturing nature is corrupted, we can compare Mildred Ratched to Misery’s Annie Wilkes. Wilkes engages in a more physical emasculation of her respective male main character than does Ratched. However, she seems to have been subjected to less vitriol than her One Flew Over the Cuckoo’s Nest counterpart – perhaps because the audience finds her raw, impassioned rage easier to relate to than Ratched’s cold front.

Whether the show really succeeds in the redemption of her character is unclear, but in watching it, you’ll probably get so swept up in the crazy plot that you’ll stop caring.

Murphy’s interest in the relationship between abjection and femininity has been made evident in season after season of AHS, so the chance to delve into the nurse’s psyche must have seemed too good to pass up. It is worth noting, then, that this reimaging of Nurse Ratched brings her closer to the hot-headed caregiver in Misery. One episode in, and she’s already directly linked to acts of violence (as opposed to the more ambiguous connections in One Flew Over the Cuckoo’s Nest). She is emotional as well as manipulative, and her fate seems strangely tied to that of one of her (male) patients. She has a traumatic past which seems designed to explain her motives, but for some reason, it is only revealed near the series’ end, and then is told to the viewer twice, in rapid succession. Whether the show really succeeds in the redemption of her character is unclear, but in watching it, you’ll probably get so swept up in the crazy plot that you’ll stop caring.

Stylish melodrama is the aim here, rather than any serious attempt at identification with the One Flew Over the Cuckoo’s Nest character. In fact, aside from the title, it’s difficult to see any strong links between this new series and its source material. Paulson’s Ratched is accompanied in her mischief by a cast of other wild and weird characters who engage in car chases, lobotomies, and sexual scenarios so ludicrous that I couldn’t help but laugh at them. I’m not sure if the humour was intentional, but boy, was it plentiful.

Buried beneath all the insane plot twists I think the show may have a point it would like to make about compassion. Sometimes it teeters on the edge of making it. But then it retreats back into its own silliness, opting to lop off limbs left, right and centre, rather than advance our understanding of the character they are attached to.

Ratched might not be as highbrow as it would like to be, but its thrills and spills are entertaining enough to make it the ideal guilty pleasure.

By the end of episode four, things finally start to make some sort of sense. Ultimately, however, it’s the fact that the actors involved take their roles so seriously that saves the show from just being nuts. Lines that might otherwise have seemed schlocky or cheesy are delivered with such aplomb that, upon hearing them, the automatic reaction is to think: “Yaas queen! I should GIF this!” And indeed these meme-worthy aspects have already been pounced upon by fans. Their dedication since the show’s release saw it rise to Netflix’s no.1 spot worldwide, from Mauritius to Bahrain. Ratched might not be as highbrow as it would like to be, but its thrills and spills are entertaining enough to make it the ideal guilty pleasure.