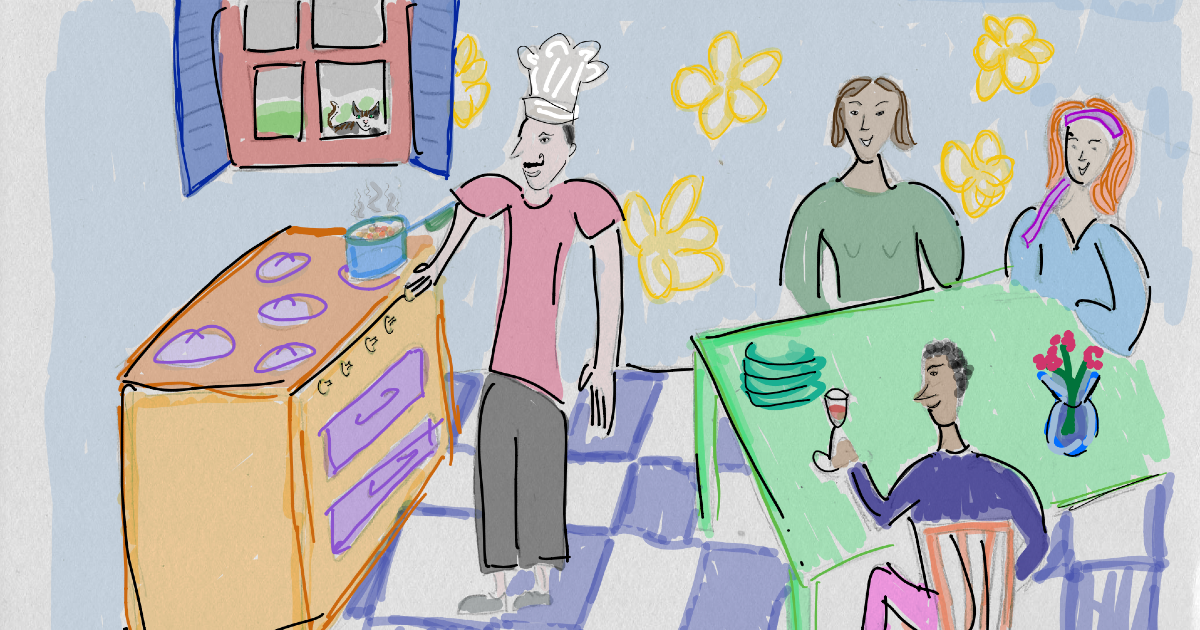 More than getting out of the washing up: the benefits of cooking

Image description: three family members sat around a table eating dinner, one stood to the left of them cooking on a hob with a saucepan.

Mid-way through Trinity, and in need of something to occupy my spare time, I made the announcement to my family that I would be taking on a full-time position as the new family chef. Donning my ‘little cook’ apron, and blasting old French songs, the kitchen was now strictly my territory.

Since then, I’ve tackled a number of dishes, from a bog-standard spag-bol to a mess of a moussaka, which finally reached the table as the sun was setting. Up until now, I’ve had raving reviews, aside from my brother’s usual comment of “what the hell is this” which on a good day turns into “not half bad”.

Despite a few failures, I’ve found the responsibility of producing fuel for four hungry mouths less of a chore and more of a daily achievement. Especially in the midst of (dare I say the word) lockdown I found cooking to be a welcome distraction.

In a paper published in the Journal of Nutrition Education and Behaviour, it was reported that approximately 80% of students can cook a meal from basic ingredients either fairly or very easily. Reported cooking ability was positively associated with better nutritional knowledge, better mental health and stronger family connections.

Cooking, I too found in lockdown, is full of mental health benefits. It gave me an opportunity to be both mindful and patient, as all my focus was on chopping away and keeping an eye on which pan was boiling over. I could easily forget whatever worry I had on my mind that day. Listening to new music or a podcast, it gave me some space to myself and by the end I had the added reward of having produced a (usually) delicious dinner.

With 0th week crawling closer and closer, I’ll soon be back in Oxford and fending for myself again. If I fell back into my usual habit, my food intake would be made up of Tesco meal deals and college dinners. Not to say that I won’t continue these habits, but as the new term is set to come with its own confinements, I suspect cooking will offer me a chance to relax as well as keeping me and my housemates entertained.

Returning to the long-lost world of Hilary 2020, I offer an example of how cooking can be social too. Having depleted the funds in our student bank account on over-priced formals, tequila shots in Bridge and one too many bottles of Isla Negra wine, my friends and I decided to skip the luxury of a Sunday roast from Turf Tavern – although, having conducted a tour of Oxford’s roasts, Turf remains unbeatable. Instead, we all crammed into the tiny kitchen on our corridor and made our own.

On the whole, despite a few burnt edges, it was a success and, more importantly, a pretty wholesome experience. In the words of the renowned wine critic, Michael Broadbent: “drinking good wine with good food in good company is one of life’s most civilised pleasures.” Having cooked the food ourselves, we also had the benefit of feeling very accomplished!

I hope to have convinced you of the benefits of taking cooking more seriously, but if you’re struggling to put pan to stove, I suggest you check out my ultimate list of cooking inspiration:

Julie & Julia – This is one of my absolute favourite movies and always makes me really want to cook. The film is set both in the romantic cooking capital of Europe, Paris, in the 50’s and in a quirky one bed flat in NYC. Julie Powell (played by Amy Adams) takes on the mission to complete Julia Child’s famous cookbook (played by Meryl Streep – how could you say no), completing a recipe a day for a year. Also, it’s on Netflix!

The Hundred-Foot Journey – This wonderful film follows an Indian family and their struggle to set up a restaurant in the conservative French countryside. Positioned across the road from a Michelin Star restaurant, a feud is ignited between the two restaurants. More than anything, I think this film demonstrates the care and emotion that is poured into cooking.

Cooking with Mika – Mika’s music alone is enough to put you in a good mood, now he’s decided to dip his toe into the culinary world to bring us some equally good food. Stuck in Greece, Mika decided to impart his cooking knowledge through a series of Instagram lives, he’s even compiled a Spotify playlist to provide the perfect back-drop to your kitchen explorations.

Come Dine with Me – A British TV classic, although the food may not always be the most appetising, occasionally a contestant pulls through with an unexpectedly tasty-looking dish. If not for cooking inspiration, this show is worth a watch purely for its entertainment value.

I’m not looking to be the next Nigella, but I urge you to get in touch with your culinary creativity and get experimenting in the kitchen.