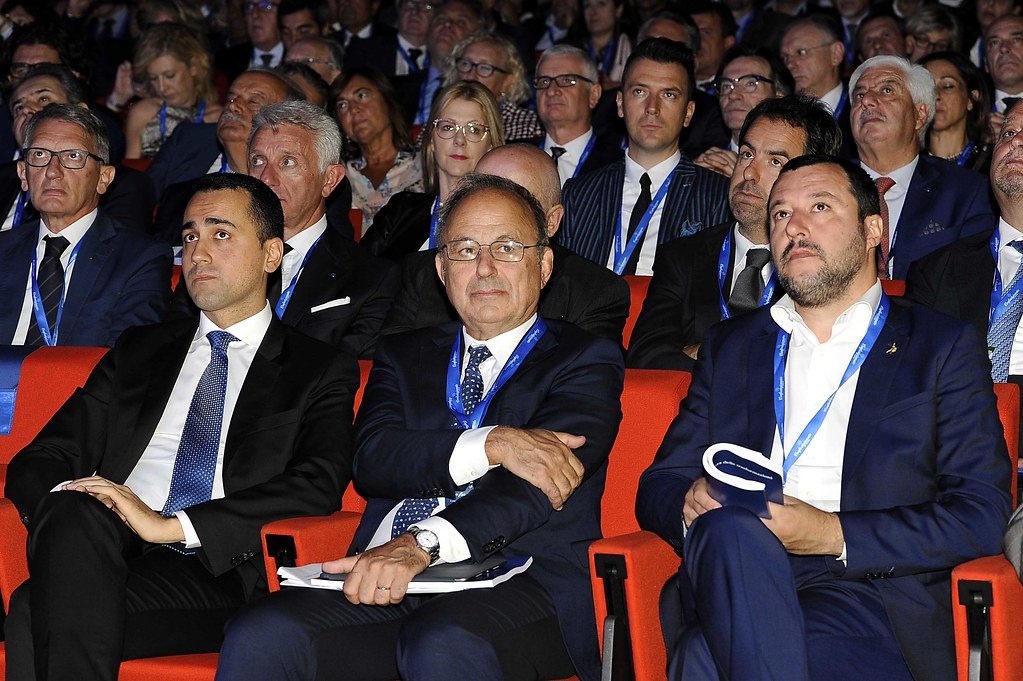 Image description: Foreign Affairs Minister Luigi Di Maio (on the left) and the leader of the Lega Matteo Salvini (on the right)

The democratic process has been under severe attack in numerous countries, especially with Donald Trump recently refusing to commit to a peaceful handover of power if Biden were to win in November. However, something worse still has happened: a very silent assault which did not receive much international media coverage.

On the 20th of September, Italians were called to the polls for a constitutional referendum regarding the number of Italian Members of Parliament. The reform to the constitution asked for a cut in the number of MPs in the Chamber of Deputies from 630 to 400, while bringing the number of elected senators from 315 to 200. As required by the constitution, the reform was voted on twice in both houses of parliament. It passed both times thanks to the support of the right-wing League, the populist Five Star Movement, and the tacit approval of the Democratic Party, before having to be confirmed in a referendum. Unfortunately, the result was an astounding victory in favour of the reform, with almost 70% of the voters supporting the bill.

The reform was initially advanced by the League-Five Star Movement coalition, which governed Italy until the autumn of 2019. It was advocated for by both party leaders Matteo Salvini and Luigi Di Maio. Unlike Trump’s threats, or the problems caused by populist leaders across Europe, this is the first truly irrevocable and long lasting damage to legislative democracy in the western world.

The reform of the constitution will see a reduction of constituencies and entire provinces will be left without representation. This will give much more power to party leaders and secretariats since having less MPs will give party headquarters and whips much more influence. This will not only harm the independence of the individual representatives, but also hand the ruling coalitions and governments much more power, massively damaging parliamentary scrutiny.

Unlike Trump’s threats, or the problems caused by populist leaders across Europe, this is the first truly irrevocable and long lasting damage to legislative democracy in the western world.

The financial benefit of this change will also be minimal, and will only result in greater powers to lobbyists. Now, lobbyists need lobby less MPs to get their way in parliamentary procedures. Further, having less MPs could lead to a paralysis of parliamentary committees, as parliamentarians will not be able to specialise in individual committees. This will essentially turn politicians into jacks of all trades, yet masters of none.

Many parties, especially the League and the Democrats, were massively split over the vote. The Democratic Party prostrated itself to the Five Star Movement in order to ride the massive wave against the political establishment, rather than explaining why such a decision was not only erroneous but downright problematic.

Although the Five Star Movement has been in steady decline in most regional elections since their electoral triumph of 2018, they have continued to pursue their semi-fascist assault on democracy. Their party founder, Beppe Grillo, proclaiming they would have ‘​opened parliament up like a can of tuna’​. Di Maio and Grillo have achieved exactly that by reducing representation from one MP for every 80,000 citizens and one senator every 200,000 to a ratio of 1:151,000 and 1:300,000 between parliamentarians and citizens for the Chamber of Deputies and the Senate respectively.

I naïvely used to think that the Italian Constitution was ‘​fascist-proof’… Unfortunately, I was proven wrong.

The referendum was portrayed as a matter of simplifying Italy’s infamous bureaucracy. However, after the vote occurred, Grillo was quick to declare that he ‘​no longer believes in a parliament, but solely in direct democracy’.​ This was therefore much more than merely a reduction of MPs. Rather, it was the first step in a calculated attempt to axe Italian democracy as a whole. The danger now lies in the fact that this want for change in the wrong direction could spread across Europe, with French far-right and far-left leaders, Marine Le Pen and Jean-Luc Melenchon, and the AFD party in Germany advocating a similar reform bill.

The Five Star Movement unfortunately exemplifies this new fascistic phenomenon. It’s a movement which despises legislative democracy and blatantly follows public anger rather than explaining reality. At the same time, it abdicates any sort of responsibility. It is a movement of organised incompetence made worse by its malicious aims. I naïvely used to think that the Italian Constitution was ‘​fascist-proof’, ​as changing the constitution is an incredibly long process due to the fact that the post-war constitution was written to avoid a resurgence of movements similar to Grillo’s monstrous creation. Unfortunately, I was proven wrong.