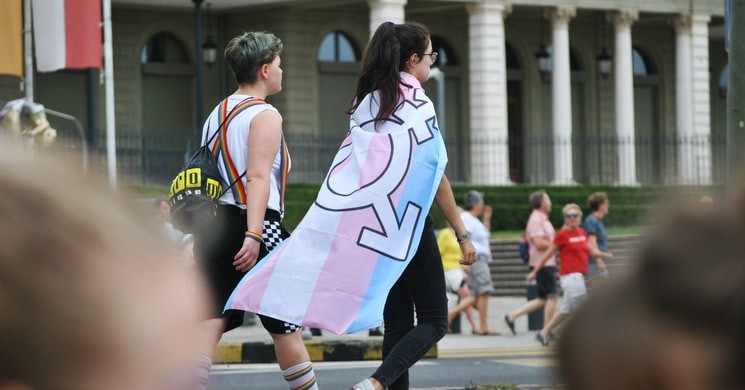 Image description: Two people walking away from the camera, one wrapped in a trans pride flag.

More than 500 students and alumni at Oxford have come together to sign an open letter condemning “two professors with a history of transphobia”.

The letter expresses disappointment and distress over the controversial appointment of professors Selina Todd and Senia Paseta to lead a new programme on Women’s Equality and Inequality at the Oxford Martin School. Accusing the Martin School of ‘tacitly sanction(ing)’ the views of Professor Todd and Professor Paseta, the signatories raises concerns about a “hostile and exclusionary environment”.

These concerns come as the latest backlash in a series of discontent surrounding the two professors. Professor Todd, a member of Women’s Place UK, has previously criticized the LGBT rights charity Stonewall for failing to “support academic freedom of thought” and presenting “anti-scientific claims… as objective fact”.

In 2018, Professor Todd also shared a petition calling on the British Film Institute to remove transgender activist Munroe Bergdorf as a speaker at its women’s summit. As reported by The Oxford Student last year, further controversy arose surrounding tweets made by Professor Todd, which included the hashtag ‘transawaythegay’. Professor Todd has repeatedly denied allegations of transphobia, instead describing herself on her website as a “gender-critical feminist”. She claims that, on the issue of self ID, ‘months of research’ led her to the conclusion that “to support transpeople’s rights… would harm the rights of women, because so often what is being asked for is free access to women-only spaces”.

At a celebration of the 50th anniversary of National Women’s Liberation Conference, held in February, Professor Todd alleges she was ‘no platformed’ and stated she was “disappointed that the organizers have refused to uphold our right to discuss women’s rights”.

In a statement to the Cherwell after the event, Professor Todd refuted allegations of transphobia, and claimed to have lost her platform as a result of “pressure from trans activists”. Professor Paseta has also attracted criticism. In 2018, she joined Professor Todd in an open letter to the Labour Party, which called on then-leader Jeremy Corbyn to “uphold their right to sex-segregated spaces”. The letter went on to denounce the terms ‘TERF’ and ‘cis’ being used to describe women.

The new initiative on women’s equality and inequality which the two professors will lead officially aims to “eradicate educational and economic inequality for women around the world”.  In expressing distress over the appointment of Professor Todd and Professor Paseta, the ‘Oxford Transphobia Open Letter’ cites the 2018 Trans Report. This report, compiled by the Student Union, found that 63% of trans students had experienced discrimination of which 97% was reported as being transphobic. The report also found that 35% of this discrimination was alleged to come from staff and administrators of the university.

Zaman Keinath-Esmail (she/her), who created the open letter alongside two other students, has said that “we are not no-platforming anyone… we think change will come more quickly if we ask for everyone to commit to it”.

She went on to say that “changing the culture of the university cannot be a top-down process: rather, we must affect change simultaneously at all levels to be successful”. The letter, which has garnered the support of a wide range of student societies including the Oxford Feminist Society and the Oxford African and Caribbean Society, accuses the university of not responding to complaints raised thus far in a ‘proportionate’ manner.

In a series of demands, the letter calls for a commitment to include trans women in future research conducted by the Oxford Martin School and requests that those professors who have “a history of transphobic views” be moved to non-student facing roles. The letter also calls on the university to adopt publicly the definition of transphobia as laid out by Trans Actual UK. Trans Actual UK includes “misrepresenting those who oppose trans people’s human rights and “ignoring the fact that transphobia is amplified when it is intersectional” in its definition of transphobia.

Zaman continued, “my hope is that our letter will begin a discussion with the university about how to better support trans students and other marginalised groups”.

Suggesting the SU LGBTQ+ Campaign as a possible conduit through which to hold a public consultation for the university to reaffirm commitments to support trans students and tangibly improve their welfare, the letter ends with the hope of establishing a “process of dialogue”.

When asked for comment, the Oxford Martin School had this to say: “The Oxford Martin School is committed to supporting people who wish to make or have made changes to their gender identity. It aims to create an inclusive trans-friendly culture and workplace, free from discrimination, harassment or victimization, where all people are treated with dignity and respect.”

The School, which specializes in research and policy and is based in the University’s Social Sciences Division continued:

“The School supports research into major global challenges and narrowing inequality between men and women is by definition one such challenge. The Women’s Equality and Inequality programme will develop a better understanding of the reasons for women’s inequality and how we can overcome this.

We fully support the right of researchers to design and develop their own research within the University’s policies on academic freedom.

The school appreciates that people can hold very strong and heartfelt views on some of the complex issues surrounding this topic. We hope that working towards greater equality globally will be positive for all people.”