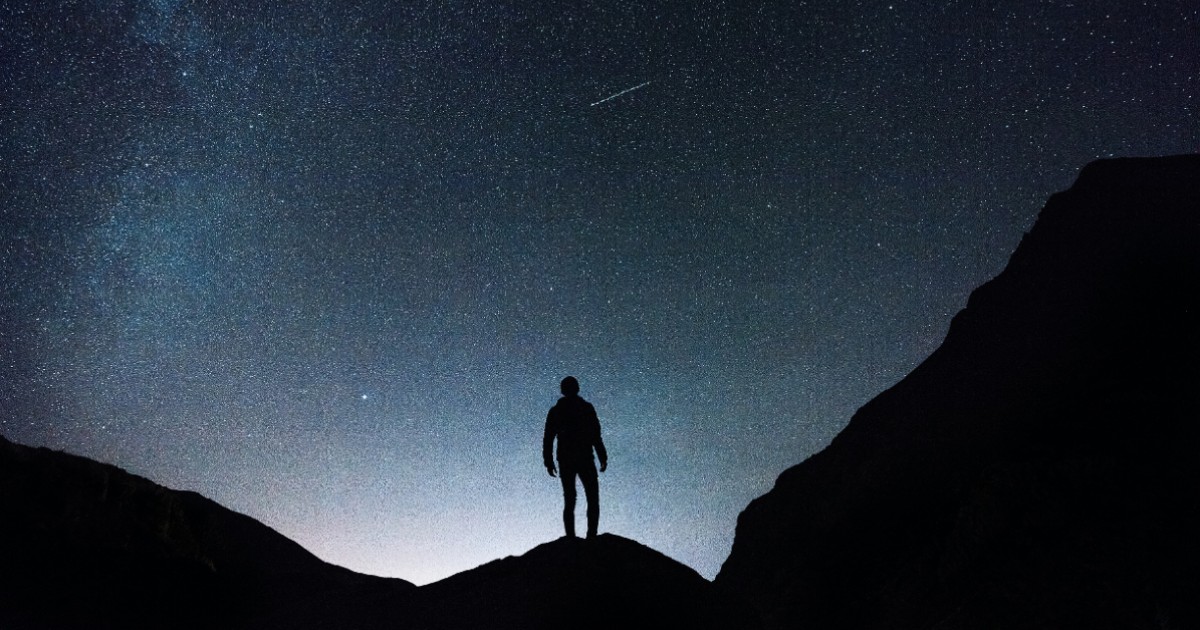 Image Description: Silhouette of an unidentified person standing on a hill during a starry night looking up at the sky.

Faith wasn’t ever something I thought I’d develop and it certainly wasn’t something I thought would be reconcilable with my LGBTQ+ identity. Since starting at Oxford, the process of integrating these aspects of my sense of self has thrown up surprising parallels.

I have found that both the development of faith and the process of LGBTQ+ self-discovery are often cut short or undermined by a societal need for ‘material evidence’. However, this material evidence isn’t always as relevant to some things as it is to others; at least not in the way that we seem to think it is.

As far as LGBTQ+ identities go, I’ve found that it has been relatively easier for people to believe someone when they say “I’m gay” than it is when someone says “I’m trans”. One of the reasons behind this is the assertion “I’m gay” can be backed up more easily with material evidence, ie. attraction.

If a gay man is confronted by a sceptic, they can reply “I am attracted to men”, and this is the material evidence given to validate their claim. A quick scan of the comments section on an article announcing a public figure recently coming out as gay reveals that the majority of the negative opinions expressed there are about homosexuality. They are based on the message “you are gay, and that is a bad thing”, not on an outright denial of that person’s claim that they are gay. Conversely, the overwhelming majority of negative interaction with someone’s coming out as trans follows the following structure:

Rejection of trans identity is the negation and denial of that person’s identity itself, where the rejection of homosexuality tends to accept the identity of the person in question while applying a negative value judgement to it in doing so.

This general idea is supported by the fact that attitudes towards gay individuals tend to be better than that of their trans counterparts – Ipsos MORI’S 2018 survey on British attitudes towards LGBT individuals quotes “just over twice as many people (23%)  said they felt uncomfortable around transgender individuals than around [cisgender] gay men (11%)”. There is a gap between the understanding and acceptance of sexual orientation, and of gender identity; and I would argue that this (in part), comes down to there being no equivalent material evidence available for trans people.

The lack of a trans equivalent to the gay man’s use of attraction to other men as the material evidence to validate their identity is clear even in the process of therapy with NHS gender identity clinics; for example, the Tavistock & Portman Clinic for under 18s. In recent years, it has, in my opinion, had a paradoxical approach in trying to help people work out who they are and what they need[1].

In an informal interview with Robert McCauley*, a 19-year-old transgender man described his treatment at the Tavistock clinic: “The questions asked in my assessment were based on the topic of how I knew I was a man”.What are you supposed to reply to the question, “What makes you a man?” if the concept of your gender is an immaterial understanding, the product of years of profound introspection and has no ties to anything that appears to be a material thing?[2]

I don’t think there are any tangible, material qualities that make a man a man and I don’t necessarily exhibit any of them

They seem to want you to answer with things like “Because I wear boys’ clothes” or “Because I like playing with cars” only so they’re able to reply “aha! So do you think that wearing boys’ clothes is what makes a man, a man?” only for their patients to reply: “Well, no. I don’t think that’s what makes me a man”. Personally, I don’t think there are any tangible, material qualities that make a man a man and I don’t necessarily exhibit any of them.

I find similar difficulties when talking about my faith. “Do you believe in God?” – well, I believe in something. I can’t give you a list of qualities I believe are attached to the word ‘God’ and that I have also seen first-hand, but why do I need to? If I believe in a monotheistic God and you believe in multiple gods for example, why do we have this assumption that one is right and one is wrong? Can’t there be more than one truth?

Admittedly, these analogies don’t fit quite as snugly as I’ve suggested. For example, I don’t think that a person can believe that they are a man, that someone else can disagree with them and that they can both be right.

However, I do believe that people can have different understandings of what ‘man’ means and that those interpretations are valid. If someone identifies within themselves what they consider to be the ‘male thing’ or the ‘male essence’ (whether that’s found in a feeling, a behaviour, etc.) and develop an internal clarity and understanding of that feeling as the centre of their maleness then that is enough. You don’t need to come up with material evidence, like playing with cars or wearing clothes generally assigned to men because those material things are simply not relevant as ‘evidence’ in this kind of case.

In the same vein, if someone is religious then their faith is all that should be necessary to secure and validate their religious beliefs and understandings as true. If I have faith then that is all I need to validate my truth, whether it is consistent with someone else’s faith or not; neither one cancels out the other.

One key thing that has helped me to think through the issues I’ve faced with my identity is to find spaces that give me the time and safety to explore these aspects of myself without shame. I’ve found a home in chapel life at my college, Exeter. I have never felt like I’ve had labels assigned to me there. I didn’t need to be religious to get involved; that was something I ended up developing over time. My identity as an LGBTQ person has never been viewed as a significant part of me as a chapel-goer, and that’s the kind of space I needed when I arrived.

[1] I recognise that some people have had very positive experiences with Tavistock and other clinics. I am not making a comment on the clinics, as much as on a broader societal focus on material evidence as to the only acceptable way of validating truth.

[2] I say this all with the disclaimer that different experiences of being trans may not be entirely compatible with parts of the above paragraph, but I don’t mean to give the impression that they’re not right. I’m just using one example of the experience of being trans as an example to highlight how this approach can be problematic for trans people in general.