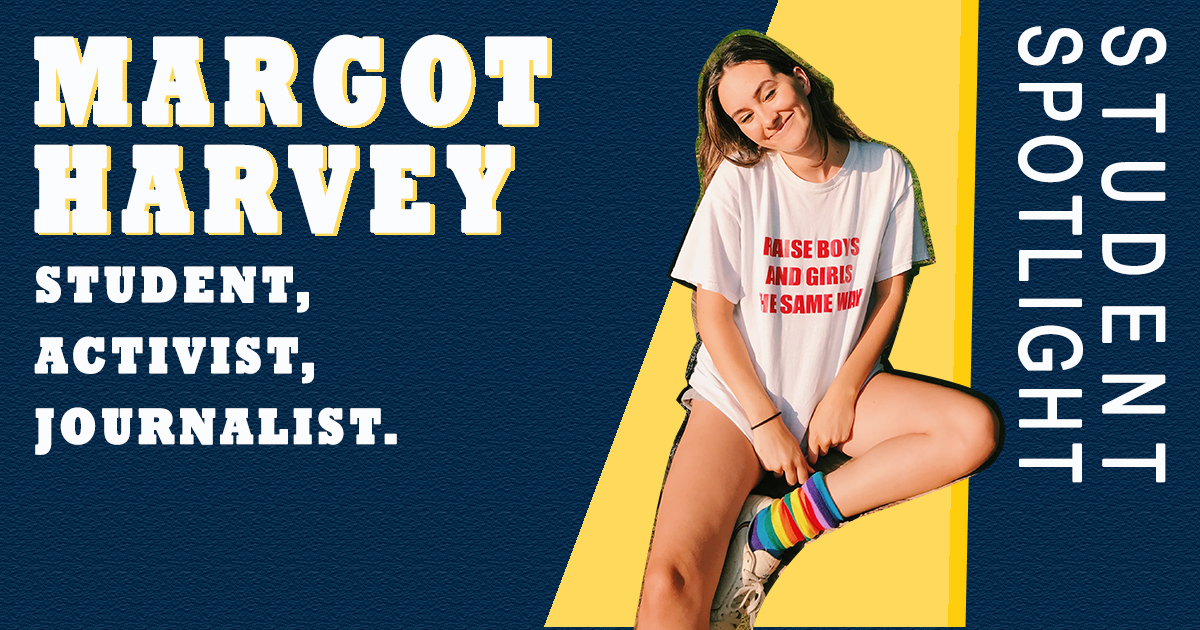 As we enter a new academic year at the University of Oxford, the Profile editors of the Oxford Student have introduced a new ‘Student Spotlight’ series which will span the eight weeks of Michaelmas term. We aim to celebrate and raise awareness of a selection of empowering student activists who are committed to making the University, and the wider world, a better place. Join us in reading about their work, their inspirations, advice for student activists and how they see their own activism evolving in years to come.

Up first in our series is a student who has been instrumental in pushing the University to address rape culture and sexual violence. Margot Harvey, a third-year student of Jurisprudence at Lincoln College, was recently shortlisted for the Oxford SU’s Student Voice Award for her work with It Happens Here, a campaign to support survivors of sexual violence. She has worked tirelessly to enforce policy changes within the University, all while acting as the JCR Gender Representative for her College and taking part in student journalism. Margot was kind enough to take some time out to talk about her activism, how she sees the University changing for the better and what advice she would offer her peers.

In your time at the University of Oxford what has encouraged you to get involved in activism?

To be incredibly tumblr-esque, my interest in activism is rooted in being the kind of person I needed when I was younger. Before I came to university, I was very used to an environment that shut down uncomfortable conversations. Rape culture certainly fits into this bracket, and it is certainly something I struggled with, mostly in silence. In my first year, activism seemed like some kind of magical mystical mirage, where being outspoken and opinionated about injustice is positive, as opposed to troublesome. From a somewhat selfish point of view, the opportunity to be very loud about injustice and to be surrounded by like-minded people seemed a very happy place to be. The more work I did and the more I learnt about sexual violence, the more I found myself seeing activism as an outlet for anger and a way to create real change. There is a lot to be angry about in this world; for me, activism has become a uniquely productive place to put it.

You’ve been fundamental to the Oxford SU’s It Happens Here anti-sexual violence campaign. What has been the most rewarding part of your work?

That is very kind of you to say! I think the most rewarding part of the work is getting to be a part of a pretty spectacular community. When I joined It Happens Here in first year, the few members we had were on the brink of graduation. Seeing the group grow and gain momentum in the last year has been incredible. Sexual violence at universities, and particularly at our university, is a really significant problem, and this is made infinitely worse by the lack of space for survivors. The knowledge that we are working to carve out that space, and to fill it with wonderful and supportive people who are determined to make a difference, is incredibly heart-warming.

You were recently Lincoln College’s JCR Gender Representative. What did this entail and what did you add/change while you were in this position?

JCR Gender Rep, a role I took on alongside Olivia De Csillery, is about representing the interests of women and minority genders. This ranged from organising free period products to planning discussions and workshops, to ladies’ pub crawls and parties, to applying facemasks and chatting about feminism. We were lucky enough to help out our MCR President, Nupur Patel, in organising Lincoln’s first ever Equality and Diversity week, which gave us scope to introduce some pretty exciting events. The crux of the role for us was simply being a friendly face for members of the College community to bring gender-related issues and to source support and signposting where it was needed. Our ultimate goal was to foster a culture rooted in gender equality, which Lincoln’s new Gender Reps are absolutely cultivating.

Congratulations on being shortlisted for Oxford SU’s Student Voice Award, how does it feel to be recognised in this way?

It was a really wonderful surprise for me! It makes me really happy to know that the work we do with It Happens Here is being recognised, most importantly because our ultimate goal is for no student to feel alone in their experiences, and the wider we reach the bigger the conversation becomes. This recognition reinforced to me how valuable these efforts are, and how lucky I am to work with such passionate people. Alessandra, who co-chaired It Happens Here with me in 2019, nominated me for this award with a description of me that made my heart literally glow. She too deserves an enormous amount of recognition for her efforts in aiding students through their toughest times, working tirelessly with the university on improving policy, discussing difficult matters with empathy, grace and strength and, on a selfish note, being an absolute hero to me every step of the way.

What do you think is the main concern that the university needs to address in relation to issues of gender?

The University of Oxford, like UK universities across the board, has a sexual violence problem. It is a problem that is met with resounding silence far too often, from society at large, and closer to home, from the student body and university staff.  What ultimately needs to be addressed is the underlying attitude towards sexual abuse, which is rooted in a total misunderstanding of the scale and nature of rape culture, and ultimately, in a blatant lack of compassion. In shifting the stance from disinterest, to recognition of the problem and meaningful action to address that problem, real change can begin.

How would you like to see the university change within the next few years?

Ideally, the next few years could bring tremendous change. A clear and centralised reporting system, as used at the University of Cambridge, could see accurate statistics about the prevalence of sexual violence being recorded and repeat offenders being easily identified. Clearly communicated policy on investigations, and enforcement of these policies, could see victims not waiting months, and even years, for their cases to be resolved, and resolved fairly. Policy changes on staff-student relationships could see the prevention of abuses of power and them being responded to fairly when they do occur. Mandatory training for staff and students in support roles and professionally-run consent training for students could be introduced. Like many US and UK universities, the University of Oxford could introduce mandatory online courses on consent, to ensure that their students are clear on consent before Freshers’ Week arrives. These changes are unlikely to occur until the crucial change comes. The university’s focus needs to shift from protecting its reputation to protecting its students from sexual violence.

What are your personal aims for the future as an activist?

I aim to continue chipping away at the mountain that is rape culture, and to make people very uncomfortable in the process. Acknowledging this very scary problem is a very scary step to take, for a number of reasons – but we do survivors a disservice by brushing it aside. I hope to push people in the right direction by continuing to explain away all the myths that we have been taught about sexual violence and to emphasise how important empathy is in these conversations. Another personal aim is to keep developing my activism indefinitely as I learn, and more often unlearn, important lessons about doing the right thing. I cringe to myself over the opinions that I held a month ago, on a monthly basis – and I think this is how it should be. As far as where I will end up with these goals, my family and friends can confirm I have literally no idea.

What advice would you give to students looking to be involved in student activism?

I couldn’t recommend it more. If you feel passionate about a cause, the prospect of being loud about it surrounded by like-minded folk is the dream. Though it may seem a little daunting, the people who dedicate their time to these things tend to be people with big hearts and a LOT of time for those who share their cause. Try not to be too disheartened by the world, which as the last six months have indisputably confirmed, can be quite a bleak place sometimes. And if you are disheartened, student activism is an excellent place to become heartened again.

Not caring about injustice because it doesn’t affect you is boring. Super boring.

Take care of your brain! Especially if you are engaging in a lot of emotional labour! Drink tea! Dance with your friends! Go to the Botanical Gardens! Thank you for coming to my Ted Talk.

If you want to learn more about the effects and realities of sexual violence, the BBC show ‘I May Destroy You’ is brilliant, or read Chanel Miller’s memoir ‘Know My Name’ or Louise O’Neill’s ‘Asking for It’ (BIG trigger warning for all of the above). Florence Given’s ‘Women Don’t Owe You Pretty’ is another favourite of mine – essentially a (relatively basic but) empowering pep talk on feminism.