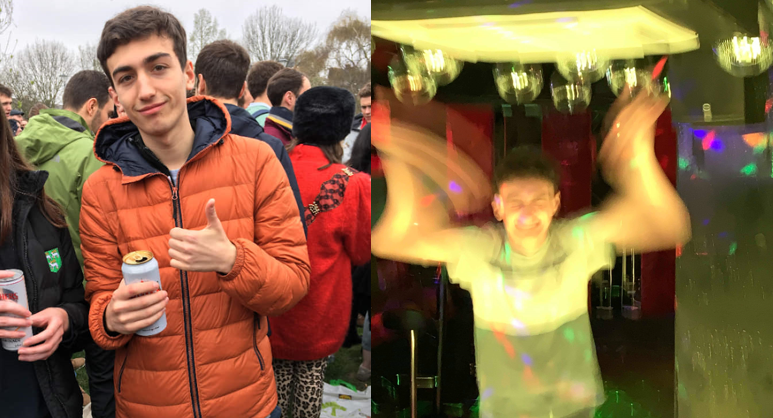 You don’t *need* to drink at uni

Image description: Left: me outside my natural habitat holding a tin of alcohol as I watch the boat race, with my thumb held up. Right: a blurry photo of me, in my natural habitat, dancing in a nightclub, hands waving.

You really don’t need to drink at uni.

I know, it’s contrary to popular opinion and to what the media will tell you, but you don’t. That’s not to say you shouldn’t or you can’t. You can do what you like so long as you stay safe and don’t harm others. You just don’t need to.

University can be a pressurising environment where students feel compelled to drink. They may be drinking for the first time, or just drinking more. Either way, no one should feel this way because I don’t think anyone cares if you’re drinking or not. That’s coming from someone who does not drink at uni and has not had so much as a sip of alcohol in his life.

Since my own fresher’s week many moons ago, I have not drunk once. In that time, I’ve managed to make plenty of friends, get involved in a broad swathe of activities, and have many a night out. It’s possible, I promise—and I’m certainly not the only one. I know many others who chose not to drink from the start, decided to stop at some point during uni, or cut down their alcohol consumption—and none of them have lost anything from it. I suppose they’re probably missing a hangover or two, but that may be welcome.

Sure, drinking culture is a thing. Freshers’ week, sport societies, and uni as a whole involve a lot of drinking for a lot of people. Just remember that this is an opt-in activity and you won’t be missing out on anything central to the Oxford experience if you opt out. There have been many attempts to diversify the uni experience, with many colleges (including my own, Jesus) promoting non-drinking activities during freshers’ week and throughout the year. Such events can include pub quizzes, karaoke, ice hockey, board games and film nights.

But you don’t have to stay in if you’re not drinking. Nights out, bars, and clubs are all available even if you choose not to drink. Fun most certainly can be had on a night out even if you are sober—and there’s the added benefit of finding your room much more easily afterwards. You can even nab a cheeky sober Hassan’s.

Fun most certainly can be had on a night out even if you are sober—and there’s the added benefit of finding your room much more easily afterwards.

Undoubtedly, some may think this will detract from a night out. Admittedly, as a non-drinker, I can’t provide direct comparison. But based on friends’ testimony, I assure you it won’t. Many feel they will lose the sense of abandon and letting one’s hair down which we crave after completing our ninth essay of term, or fifth lab. Does alcohol do that? For many people. Is it necessary? I don’t believe so. Being in an environment where everyone else is relaxed makes it extremely easy for me to be so as well, even if I’m stone-cold sober. And believe me, I’ve had plenty of big nights out. I’ll spare you the details…

So what’s it like then? Being in a nightclub full of drunk and sweaty individuals, engulfed by loud pop music and aware of every last bit of it? I think people make too big a deal about how unpleasant it is. Going straight in might be a little disconcerting but within a few minutes you get used to the undulating swarm of bodies.

Soon enough, you’ve forgotten your inhibitions about the fact that you really can’t dance and subject all those around you to terrible sights as you boogie along to the music. Sobriety doesn’t hinder your ability to dance or to socialise or to appreciate the music. With a group of friends, it’s a great chance to dance around and have some downtime with those close to you. Being sober probably makes you more aware, and I suspect it allows you to engage with and bounce off friends rather than just drunkenly prancing around.

At the point where “OMG THIS IS MY FAVOURITE SONG!” is played, sober or not, you will escape that last restraint which social expectations placed on you and go for it. Just make sure you never see evidence of it afterwards.

In fact, during my own fresher’s week another fresher suggested we had met the previous night when I was “absolutely smashed”. After explaining that I wasn’t drunk the previous night, it became clear that I had so little regard for my own dignity that I had appeared to be drunk anyway. Thankfully, no evidence exists.

You’re also entirely capable of speaking to others, making friends, and having a great social scene without any Dutch courage. I got to know those who were drinking and those who weren’t drinking – one of the highlights of freshers’ for me.

And pressure to drink? There was very little, if any. Some people would encourage me to drink even once they knew I was teetotal, but they thought no less of me for turning the drink down.

Most didn’t offer me alcohol or would happily accept my response that I didn’t drink. The majority of the time, I didn’t even have to mention that I didn’t drink and they accepted my polite refusal of their offer. Many other students were in similar positions. This provided a silent support network: we were all aware that we weren’t the ‘odd ones out’.

Something I was more worried about was that I wouldn’t ‘fit in’ with groups who drink excessively. Perhaps I would be socially excluded from such activities. Once again, this was not the case at all. I was still just as able to attend pres, play ‘drinking’ games, and then go onto the club. No-one excluded me and no-one cared. Amongst my peers there was significant support for my choice not to drink. Many of them told me how much they rated my choice. So the experience has been easy enough for me.

Most people are more worried about how they come across to others. We’re all worried about if we’re ‘drinking enough’, if everyone else can notice we can’t dance (pretty much no one can, don’t worry), et cetera. But trust me, in amongst this concern, no one really cares how much you’re drinking, if at all.

I think it’s both acceptable and good to speak openly about not drinking. Although there’s no need to advertise it, there’s no need to hide it either, and being open with this information provides ideological support to others. It shows them they don’t need to feel pressured into drinking. Ultimately, that’s why I’m writing this. It may seem that everyone at uni is drinking, many excessively. But that’s not true.

There isn’t as loud a noise made about not drinking as about drinking. But all around you there are people who aren’t drinking. And you don’t need to, either.