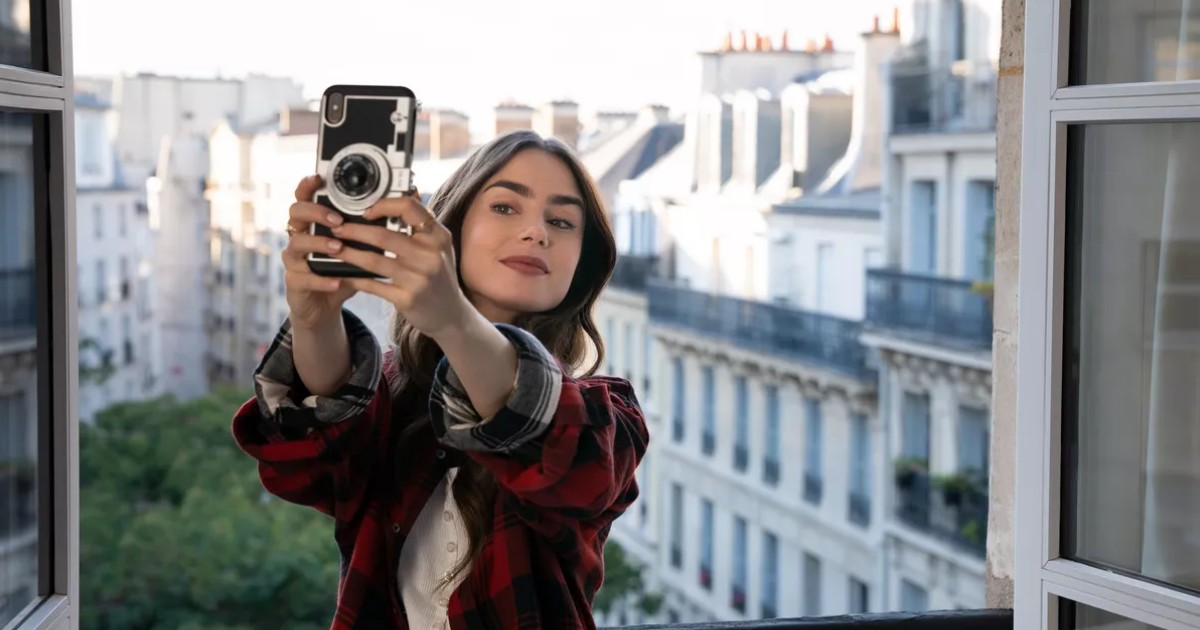 Image Description: Lily Collins as Emily taking a selfie in front of a Paris skyline.

Does everyone remember that unbearably cringy scene from Sex and the City when Carrie shows up at Big’s door with McDonald’s wearing a beret and does a really bad French accent? I personally think Darren Star has been sitting on this Emily in Paris idea for years. The Sex and the City creator’s latest project, Emily in Paris is most definitely a satire, although I’m not quite sure if that was the intention.

Emily in Paris is most definitely a satire, although I’m not quite sure if that was the intention.

I spent the entirety of the first three episodes haunted by the opening scene: Emily (Lily Collins) is finishing up a run (before work, obviously) and a robotic voice says “Run Complete. Well done, Emily. Five point three miles. Forty one minutes. Eighteen seconds faster than yesterday. Good effort.” and Emily breaks into a self-satisfied smile. Millennials are all about self-improvement.

After her run, Emily tests perfumes with her boss, Madeline, at their Chicago-based marketing firm. Madeline is supposed to move to Paris to work at Savoir, a boutique firm specializing in luxury brands which the Chicago firm has recently acquired. When she vomits after sniffing a perfume (which in a moment of pure genius, Emily says is “like wearing poetry”), she realizes that she is pregnant and decides to stay in Chicago. So naturally, our excruciatingly chipper protagonist, Emily, is sent in her place. Within five minutes of the opening credits, Emily is, indeed, in Paris.

Emily in Paris seems like something the Riverdale writers would churn out if they were told they couldn’t incorporate demons, cults, or murderers. It’s chintzy, but watchable if you’re capable of suspending your disbelief for 5 hours. You might hate Emily, but you’re still rooting for her. She makes extremely feeble attempts at learning French, and uses an app on her phone which she speaks English into and a robot translates into French aloud while she smiles aggressively at the person she’s trying to communicate with. When she walks into her office in Paris on the first day (wearing a blouse with the Eiffel Tower on it, no less), she is shocked that her colleagues are upset that she doesn’t speak French– “I did Rosetta stone on the plane but it hasn’t kicked in yet”.

It’s chintzy, but watchable if you’re capable of suspending your disbelief for 5 hours. You might hate Emily, but you’re still rooting for her

Although initially, and unsurprisingly, all of Emily’s co-workers hate her (they call her ‘la plouc’ or ‘the hick’ behind her back), French men love Emily. Her dreamy downstairs neighbor, and gourmet chef Gabriel (Lucas Bravo) is absolutely enthralled by her, despite the fact that when he told her he was from Normandy she said, “Oh! I know that beach, Saving Private Ryan!”. This ongoing flirtation is one of the grounding plotlines in the show as it chronicles her various romantic pursuits, and yes, I was invested.

Sadly, either in an attempt to keep the show friendly to young audiences, or simply a lack of specific direction– the writers couldn’t seem to decide whether they wanted it to be sexy or not. This indecisiveness manifested in a decidedly unsexy show, with a disgusting amount of awkward sexual innuendo. And I mean puns on coq au vin and the Eiffel Tower awkward.

A decidedly unsexy show, with a disgusting amount of awkward sexual innuendo

It’s as if they couldn’t decide what to do with her. You’ll find yourself going between hating her lack of self-awareness, to perking up because you think she’s growing, and then becoming immensely disappointed when you realize that she has not, in fact, grown at all. This frustrating process occurs at least once per episode.

The other driving narrative of the show is Emily’s Instagram account, @EmilyInParis. Social media editors have scoffed at Emily’s unrealistic meteoric rise to Instagram influencer through the use of hashtags (yes, hashtags) like #CheeseburgerInParadise and kissy-face selfies. And for good reason! She only had a feeble 48 followers in episode one. The Hot Thin White Girl Abroad on Instagram thing that Emily has going for her is reminiscent of Caroline Calloway’s infamous origin story (except Caroline Calloway did it better).

Generally, almost every aspect of Emily’s career success is unrealistic. Having been an assistant in entertainment before, if I promised to get a reservation at a Michelin star restaurant, took everyone there, and then told the whole group we had to walk to another neighbourhood to a restaurant none of them had heard of because I was confused by the European date formatting? Not only would I have had a panic attack, but I would have been mortified and fired! But no consequences for Emily. She is, to an extreme fault, never embarrassed.

Realistically, the world didn’t need another American commentary on social media, luxury merchandising, or France for that matter! But I don’t think Emily in Paris was trying to change the world. Watch the show for the drama surrounding Emily’s French boss Sylvie (Philippine Leroy-Beaulieu) and her affair with a married client, Emily’s hilarious best friend, Mindy (Ashley Park), and the old vs. new guard fashion plotline in the latter half of the season which introduces a modernist designer duo called ‘Grey Space’, a not so subtle allusion to Off-White.

“Realistically, the world didn’t need another American commentary on social media, luxury merchandising, or France for that matter! But I don’t think Emily in Paris was trying to change the world”

You will laugh, even if just at the absurdity of the whole thing. Emily in Paris is the kind of trainwreck that you can’t look away from, it will most definitely melt your brain a little, but given the times we’re living in, maybe we deserve a bit of escapism.