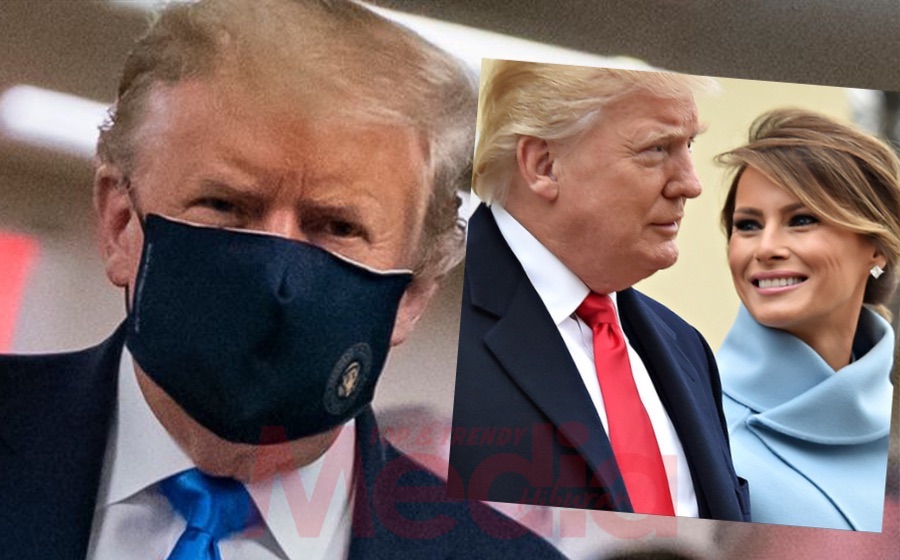 Image description: Trump is shown with a black mask on in the main picture; an additional picture shows Trump with Melania, without masks and smiling

Even among a competitive field, the 2020 American Presidential Election has been especially turbulent. The summer saw the country rocked by protests demanding justice for the deaths of George Floyd and Breonna Taylor, among others. Justice Ruth Bader Ginsburg passed away, leaving a seat open on the Supreme Court for the Republicans to force through the nomination of a judge who is her ideological opposite. The New York Times even published a bombshell exposé of Trump’s long awaited tax returns.

But all that seems like it happened months ago, with the news breaking at the beginning of October that President Donald Trump had caught COVID-19 along with several of his advisors. At this stage in the election, a news story of this magnitude appears to have the potential to significantly affect the outcome of the election on 3 November.

The “October Surprise” – the name given to major news stories and scandals which emerge late in an election – has become almost as much of an institution as the presidency itself. It dates back to the closely fought election of 1800, when Alexander Hamilton intervened with a 58 page excoriating polemic against the incumbent John Adams. In doing so, he split the Federalist Party and allowed Thomas Jefferson to become President.

More recently, the indictment of Reagan’s Secretary of Defence in the Iran-Contra Affair and Hurricane Sandy battering the eastern seaboard have both been said to have influenced the outcomes of the 1992 and 2012 elections respectively.

Despite the tumultuous events which have occurred during the election campaign, polls have consistently shown Biden hovering at around 50% of the national vote, and Trump around 45%. This has been pretty stable since June. A poll by the New York Times before the first debate on 30 September placed Biden and Trump at 49% and 40% of the vote respectively.

When they ran another poll on 2 October (before Trump was announced as COVID positive) Biden’s share of the vote remained the same while Trump’s increased to 42%. Subsequent polls have not shown a significant change, with The Washington Post putting Biden on a 12 point lead ahead of Trump.

Trump contracting COVID has proved a litmus test for peoples’ views on his presidency: for his supporters, defeating the virus proves Trump’s strength; for his opponents, this displays his recklessness.

Crucially, only 6% of voters remain undecided. The general stability of Trump and Biden’s polling numbers indicates that very few voters can be influenced by either party. The rhetoric we have heard from the Trump campaign since 2 October reinforces that interpretation. Commenting on the polished video Trump’s campaign produced showing Trump’s triumphant return to the White House, Obama’s former Communications Director Dan Pfeiffer remarked: “If you saw nothing else, this is potentially effective for him… This is primarily a piece of propaganda for his supporters.”

Looking at the data we have so far, Trump contracting COVID has proved a litmus test for peoples’ views on his presidency: for his supporters, defeating the virus proves Trump’s strength and the over-exaggeration of the threat from COVID. For his opponents, this displays his recklessness; and the fact that Trump had a personal team of elite doctors reveals the injustices of healthcare in America.

Polls should be treated with some scepticism. After all, pollsters failed to predict Trump’s victory in 2016 against Hillary Clinton. American general elections are particularly hard to predict: it is a nation which stretches “from sea to shining sea”. America encompasses cosmopolitan megacities, crumbling communities where industrial jobs have either become unviable or been outsourced overseas, bucolic rural communities where the church remains the centre of the community, and cities still reeling from the legacy of redlining and other forms of racial injustice. It is a country where political opinions correlate strongly with age, race and especially level of education. It is difficult to generalise across these communities, and the Electoral College can mean that failing to predict the behaviour of one community can make the outcome of the entire election a surprise.

However, polling agencies have adapted since 2016. While polls in 2016 weighted their data based on race, age and sex to reflect the demographics of the region they were examining, they failed to weight by educational attainment. Voters with a college degree are more likely to participate in a voluntary poll than those without, and white voters with college degrees are significantly more likely to vote for the Democrats. Failing to account for this means that polls can overestimate the number of college graduates in an area, and thus underestimate the levels of support for the Republicans and President Trump.

It looks like many Americans believe they have seen everything they need to from the two men vying to lead the country over the next four years.

The national polls aren’t the only ones which show Biden leading over Trump. Polls collated by FiveThirtyEight.com show that Biden is leading in crucial swing states, albeit narrowly in some. In 2016, Hillary Clinton lost the rust-belt state of Pennsylvania by a mere 44,000 votes; as of 13 October, Biden was seven points ahead of Trump. Although other states such as Florida show tighter margins, they match the national picture: Biden’s popularity remains consistent at 50%,  while Trump’s is more volatile.

Twenty million Americans have already voted as of 16 October, either through mail-in ballots or in-person polling stations. This record-high early turnout reinforces the polling evidence that most Americans have already made up their minds about who they will vote for, and that no new scandal will be able to sway them either way. With a death toll from COVID-19 large enough to wipe out the population of Salt Lake City, and an economic crisis which does not look set to improve any time soon, it looks like many Americans believe they have seen everything they need to from the two men vying to lead the country over the next four years.