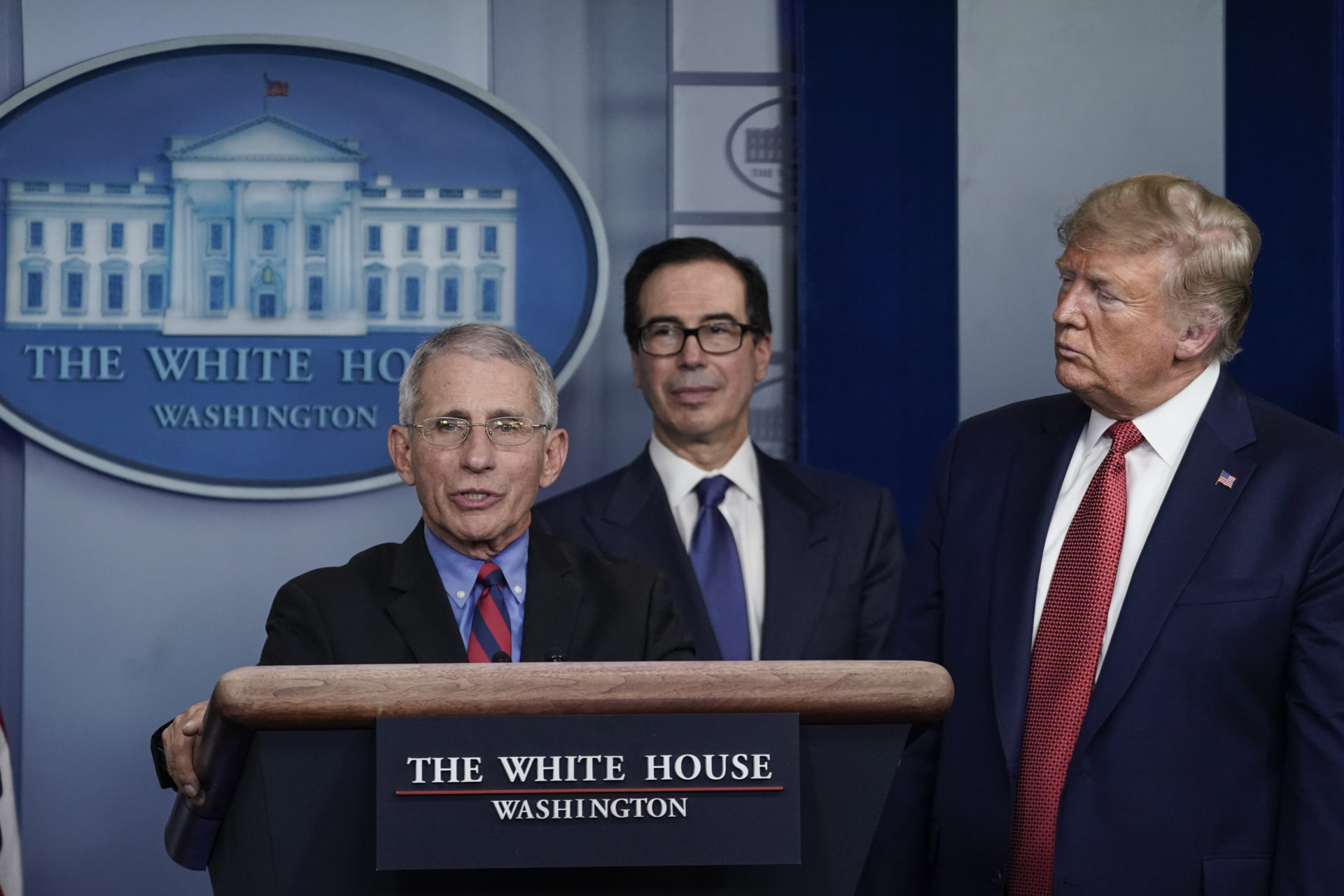 WASHINGTON, DC - MARCH 25: National Institute of Allergy and Infectious Diseases Director Anthony Fauci speaks as U.S. President Donald Trump and Treasury Secretary Steven Mnuchin look on during a briefing on the coronavirus pandemic, in the press briefing room of the White House on March 25, 2020 in Washington, DC. The United States Senate continues to work on a $2 trillion aide package to combat the health and economic effects of the COVID-19 pandemic. (Photo by Drew Angerer/Getty Images)
Science and Technology
·19th October 2020

What effect will Trump’s policies have on public health?

When Trump’s 2016 MAGA campaign promised to make America a global leader, we didn’t quite expect it to include its number of Covid-19 cases. Yet, here we are. The hot garbage that constitutes the White House’s pandemic management has so far resulted in 7.8 million confirmed cases and 217 thousand deaths, representing approximately 20 percent of total cases globally, and the stats are continuing to climb.

This national disaster of unprecedented scale is due in part to the government’s propagation of coronavirus misinformation. As the 2020 election draws near, the onus is on experts to present a united front against Trump’s lies, to ensure they don’t result in more deaths.

This, of course, is much easier said than done. As 3rd November looms, Trump’s campaign is ratcheting up the pressure and playing off previous strengths in the hope of securing a win over Biden. It is generally accepted that the President’s strong-man persona and ‘untouchable’ cult identity were integral to his victory in 2016. Consequently, it is unsurprising that his government’s coronavirus management strategy would revolve around maintaining an illusion of control: downplaying the severity of the pandemic and convincing the voter base that they are safe under Trump’s administration.

It is for this reason that the White House was so reluctant in releasing details about the President’s visit to the Walter Reed National Military Centre following his positive Covid-19 test on 2nd October. In doing so, they might jeopardise his façade of superhuman power – particularly as he previously insinuated only the weak and frail would be susceptible to the disease. Rajnandini Pillai, a professor of Management at California State University, San Marcos, writes: “It’s all about projecting a certain image. He’s always sold himself as messianic, and by projecting strength he can minimise cognitive dissonance among his followers.”

If Trump’s consolidation of his cult following wasn’t ominous enough, his apparent swift recovery and subsequent gloating reinforces White House rhetoric that Covid-19 is no big deal. Trump’s equivocation omits the fact that as the President, he has access to the best healthcare America has to offer. On the other hand, the general public are shackled by obscene insurance fees and sub-optimal treatment centres, completely altering their experience of the virus.

The President also has a significant advantage over medical experts in the ongoing war of words. Lying doesn’t take much effort whatsoever – but science does. Trump’s solutions are simple and apparently spontaneously generated – ‘take this pill’, ‘inject this disinfectant’, ‘stand under this UV light’ – and would be remarkably immaculate examples of Ockham’s razor if they weren’t so terribly wrong. Disproving these bizarre theories on the other hand, is a tedious affair and by the time the proper scientific procedures have been carried out to demonstrate their ‘covfefe’, two more have sprung up in their place.

Trump’s endorsement of Regeneron Pharmaceuticals’ experimental Regn-Cov2 is one such example. Although the drug is still in the trialling stage, it was authorised for ‘compassionate use’ by the President’s physicians in hospital. Though the antibody cocktail may well turn out to be the magic bullet we’ve all been hoping for, it is simply too early to tell.

Trump’s intervention, which dramatically inflated Regeneron Pharmaceuticals’ stock and funding overnight, is certainly not conducive to Covid-19 research as a whole. As of yet, there is no reason to suggest Regn-Cov2 is effective owing to a lack of conclusive evidence. Therefore, the boost its parent company has received is unwarranted, considering that investors could have supported more promising programmes.

Moreover, there is no easy way to find out whether the drug actually works besides allowing the trial run through. As a result, the damage Trump’s endorsement has inflicted may take some time to reverse. If this sequence of events feels familiar, it is. The exact same situation occurred with the President’s endorsement of hydroxychloroquine earlier this year, a drug that has since been determined to have no clinical benefit. Evidently, medical experts must be constantly on the back-foot while battling Trump’s misinformation purely because lies are easier to make up than disprove.

We could of course speculate about what the aim of this misinformation campaign is. Perhaps the White House is deliberately stirring outrage to detract attention from Trump’s tax returns, rebooting the news cycle to enforce ‘censorship through noise’. Perhaps the President’s illness was faked in the hopes of raising his approval ratings, in a similar way to Boris Johnson. However, what’s more concerning than his influence on the next election is the distrust towards the medical community that President Donald Trump has instilled in the American public. This distrust will continue to have pernicious repercussions in the long term.

Suggesting Trump is solely responsible for medical fake news would be disingenuous, but he has certainly set a dangerous precedent that paves the way for further exploitation of the media. Fake news was a pre-existing condition to which the President was a particularly exasperating virus, if you will. Trump’s four years in office have disrupted conventional methods of retrieving accurate information, especially concerning the news. He has muddied the channels of political discourse (as seen during the latest presidential debate), and ushered in an anti-intellectual renaissance. These damages cannot be rectified overnight.

Fake news was a pre-existing condition to which the President was a particularly exasperating virus, if you will.

It is certainly surreal to observe a defamation lawsuit against Fox News successfully dismissed by reasoning that ‘no reasonable viewer’ would believe the rhetoric of primetime host Tucker Carlson. Despite this, hundreds and thousands of people continue to treat the channel as their main source of information about the outside world. President Trump has popularised the worldview that anything that contradicts one’s beliefs must be fabricated, a detrimental idea for significant portions of society to possess during a pandemic.

Trump’s role in the dissemination of misinformation during the pandemic and the gravity of the implications it has for public health are difficult to overstate. We can only hope his dreadful saga is drawing to a close.