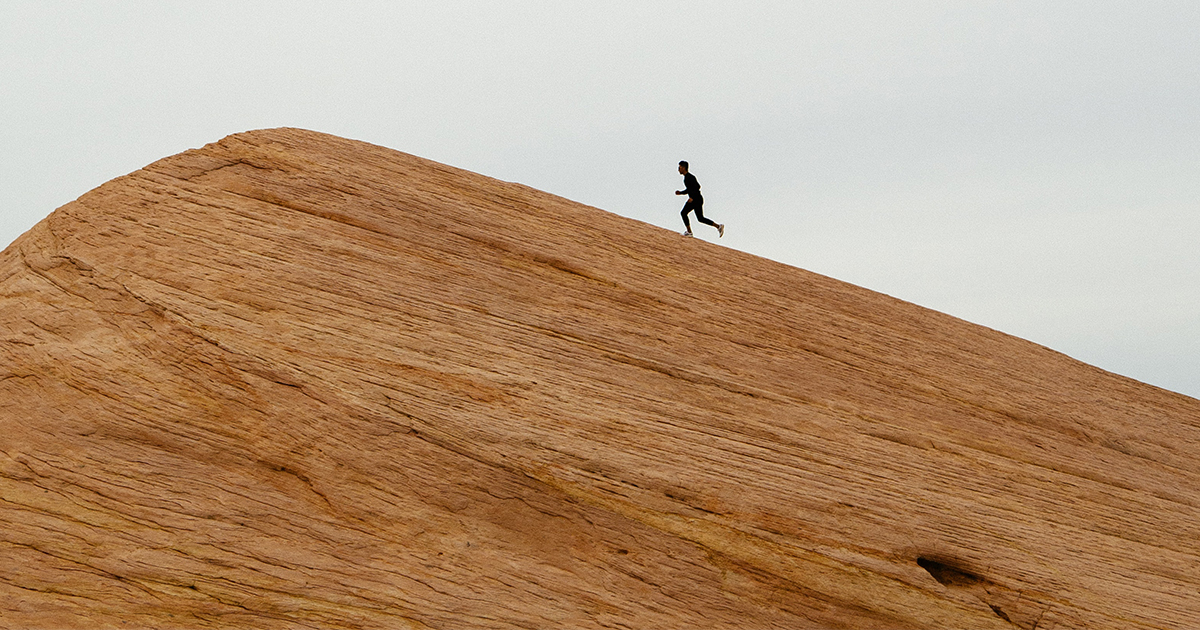 Miracles do happen! How Lockdown brought out the runner in me

Image Description: A silhouetted man running up a rocky hill

I have to admit, before lockdown I never quite understood why running was so popular as a form of exercise. I’d watch my friends and housemates go off on runs to “blow off some steam” after a long day at work, while I waved them goodbye with Nutella in one hand and a TV remote in the other.

Don’t get me wrong, I did exercise, but personally I always enjoyed activities that were in groups. Zumba, netball, pilates – I preferred being held accountable by others around me, and activities where I almost felt like I wasn’t really exercising at all. Running felt too lonely, and I couldn’t bear the pain in my calves, or the thought of being out of breath after running a total of five minutes down the road! I guess deep down there was also a big insecurity of being too slow or looking too awkward when running past (or being overtaken by!) other pro-runners in public.

Then lockdown hit, and much to my surprise I did quite the 180…

Like many people during the UK lockdown, and across the world, I found myself going up and down with my emotions. For the most part, I did a good job of keeping productive with my DPhil thesis and trying out new skills, like guitar playing and coding. I even tried to keep up with exercise by following YouTube workouts and joining the odd Zumba class, and at the very least going for a long walk around my local surroundings.

I needed something to make me feel reenergised.

I felt as positive as you can do in a pandemic and was perhaps naïve in thinking that this would all end soon. But as the weeks and months went by, and my anxiety grew enormously every time I read the news, my usual routine started to feel very dry and tedious. I couldn’t find the energy or motivation to do anything other than spend time on my computer screen. I tried to vary things with the odd ‘PE with Joe Wicks’ class and even some online Zumba classes, but they never felt quite right. Maybe it was the frustration of bumping into households objects in my room that stopped me from letting go, or just the simple fact of being in the same room all day and then exercising in that very same space. I needed something to make me feel re-energised.

After what felt like the 100th virtual pub quiz that I did with some mates, I got chatting to my French friend and she mentioned wanting to get involved in some kind of sport. Like me, she had trouble remaining motivated. She wanted to get involved in something that would distract her from the horrors of the outside world and offer her some calm in the midst of working from home.

As we kept talking about our common goals, the ‘Couch to 5k’ challenge came up, which I hadn’t heard of before. For those who have never come across it, the challenge is a nine-week guide that helps you to build up your fitness. The podcast series supports you to consistently being able to run 5km in around 30 minutes. It includes some pretty funky music and a very reassuring voice that definitely helped me to get into the right mindset for running. Before I knew it, I agreed to get involved in the challenge with my friend, not fully realising the commitment.

Before I knew it, I agreed to get involved in the challenge with my friend, not fully realising the commitment

In the beginning this whole challenge felt completely impossible. In general I could barely run ten minutes without stopping to walk! On top of this, I had not even an inkling that this was an enjoyable thing to do in my spare time. I’d make sure to go on my run during the quiet parts of the day so that no one could watch me making an utter fool of myself! But I decided that, regardless, it was time to step outside of my comfort zone and try my very best, despite the voices in my head telling me that I would fail. Nor was I the only one who wanted to try this new adventure.

A few weeks in, I felt such a feeling of accomplishment and I could actually see the difference in my stamina from week to week

Throughout the lockdown, searches for the app steadily increased and before I knew it I saw more and more people on my social media announcing their completion of the course, which only spurred me on to keep up with the running. Having my friend there also really helped me to be accountable three times a week. We would send each other photos of ourselves immediately after running, all sweaty and out of breath, and once that was done we knew that there was no other option but to keep going!

What felt quite tricky early on became more and more doable. I could run and walk according to the running timelines with much more ease than before and I started to enjoy it! A few weeks in, I felt such a feeling of accomplishment and I could actually see the difference in my stamina from week to week. Of course, it wasn’t amazing every time. I still had moments when I really had to push myself to go out for a run, especially in bad weather.

Running gave me a bit of respite in the day, and let me be comfortable with silence.

Towards the halfway mark, the mental struggle grew much stronger than the physical one. There were times when I questioned if I would ever make it to the end. But these moments were swallowed up by a new-found freedom, and without any excuses to hold me back I grew out of feeling self-conscious. Before I knew it I was starting to look forward to going on my runs, and what had started as a bit of a bet with my friend eventually became a real source of self-care. It dragged me away from the screen that I stared at for hours upon end, and allowed me to focus on things in my surroundings that I never really appreciated.

I was really fortunate to be in Jersey during the lockdown, away from my useful concrete jungle in a London suburb. Quite the opposite, the views on my runs consisted of beaches, fields and Jersey cows! I had a new sense of appreciation for nature, and enjoyed just being alone with my thoughts.

The anxiety of being away from my family and friends, especially my parents who are key workers, was still quite tough, but running gave me a bit of respite in the day, and let me be comfortable with silence. I could finally hear the rustling of trees, smell the freshly cut grass and admire the sunshine hitting my face; it was utter bliss. But it’s important to note that I was also in a much safer environment than most, and didn’t have to deal with some awful aspects of running, namely harassment, that many runners sadly face.

When I got back to Oxford and, in many ways, to reality, I really tried my best to keep up this new-found energy. There have been a few bumps in the road with motivation now and again, and sometimes my calves have ached quite a bit! Sadly, I have had to think about when and where is best to run for my own safety, but for the most part it has been successful in helping me to remain positive and at ease with everything that is going on in Oxford and beyond.

With all of this said and done, am I now an expert runner? Far from it! But what I am is someone who now enjoys running and uses it as an outlet. I’m not looking to run a marathon anytime soon, but now I have the confidence to put on my running shoes and to get out for some fresh air. If I look ridiculous doing it, I’m glad that I tried something new during lockdown, and the past Nupur would be shocked to hear me say that I’m glad it was running.