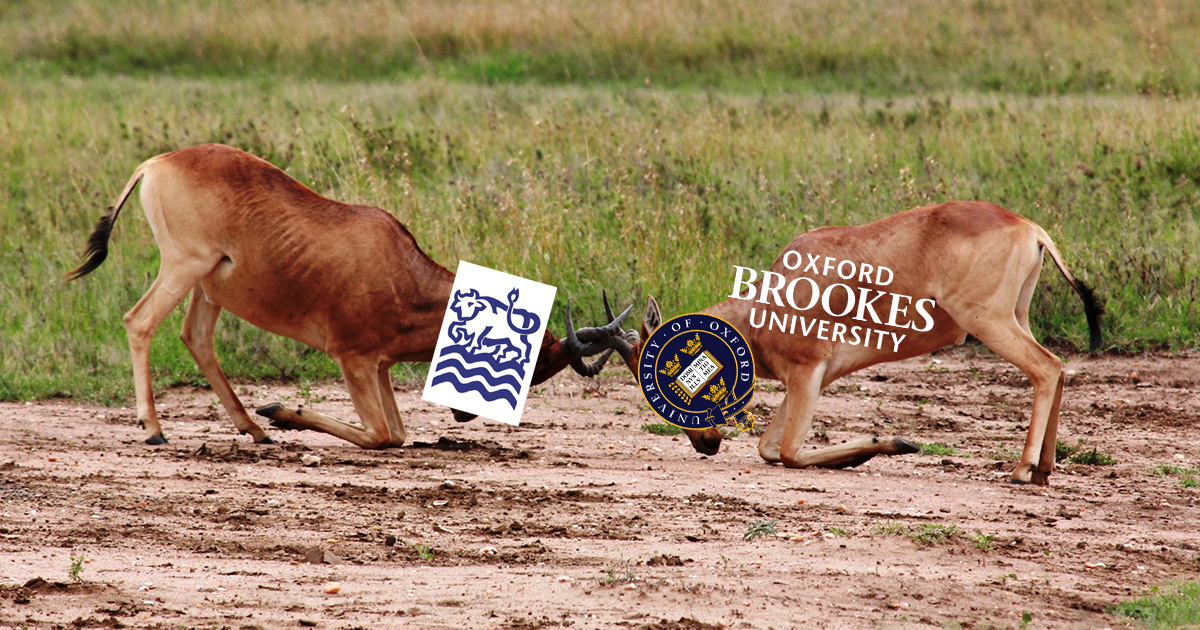 Now is not the time for ‘Town versus Gown’

Image Description: Two deer fight, overlayed with the logos of Oxford City Council on one side, and Oxford University and Oxford Brookes University on the other

A similar sense of dread is settling over Oxford as it was in the panicked last week of Hilary Term.

We know a little more about the virus than we did seven months ago. Still, cases and hospitalisations are once again rising. There’s a sad feeling of saying goodbye to our summer freedoms, which we might now regret having taken for granted. We cannot help but feel taken aback by the rate at which restrictions have been reimposed over the last few weeks, if not in Oxford then across much of the rest of the country.

When friends from home ask me how Oxford is doing, I always tell them that the city is feeling angsty. Its cobbled streets are not made for social distancing; there is an uneasy, unsettling jitter in the way we all move and interact outside. At home in London, I’d only really wear a mask in transport and in public indoor spaces. In Oxford, I don’t feel safe leaving my house without it on, though perhaps I’d feel the same if I returned home now.

In all honesty, I’m feeling really anxious and worried. I check case numbers regularly; my stomach feels tied in a guilty knot when I’m meeting other households, and I know other students are feeling the same way. We live in fear of the latest updates; we often think about not leaving our rooms. None of this, of course, is helpful for our mental health.

A great comfort in mid-March was that communities rallied together, even as the physical distance between them increased. People reconnected with old friends; unfamiliar neighbours reached out to each other; volunteers signed up in their hundreds of thousands to help food-banks, NHS logistics, charities, and other grassroots initiatives. Since the Second World War, no event had caused so much collective and shared trauma across the world. In Britain, we faced it together.

Humanity, compassion: things that permeated our first wave seem now to be stuck in the middle of two warring camps. Those on social media face warnings of impending doom and those imploring us to follow the rules, or the anger expressed at restrictions and calls for the virus to let rip. It seems as though bitter politics has pushed away earlier understandings.

How did we get to this point? My guess is that, for all their advantages, social media makes it harder for us to interact humanely with each other. When we all speak through direct messages, it’s easy to allow friends we might not see so often slip through the net. It takes more effort to reach out. It’s much harder to show compassion, and much easier to send a thoughtless, angry text or comment once we forget the human being on the other side of the screen.

Recent heartbreaking headlines in the student press indeed suggest that the lockdown has wounded our communities, while the efforts to mend them have been paltry. When I read the horrific story about students coughing in the face of college staff at St. Catz, I couldn’t help but feel that it spoke to a community that had forgotten how it used to live together.

It isn’t just a college problem. In recent weeks, the Oxford Mail has busied itself sowing the seeds of discord and division. On Thursday last week, an editorial blamed university students for the current rise in cases, warning that “all it would take for [an outbreak] is for a few students to act in an irresponsible manner.”

It continued: “While we wouldn’t want all students to be locked up in their rooms until the end of term, so long as they continue to behave as responsibly as possible then we can hope to keep our county just on the right side of lockdown.”

It upset me deeply to read those sentences. As a student, I felt targeted, as though the newspaper were gunning for a rerun of St. Scholastica’s. Maybe it is. On Friday, the Oxford Mail’s front page angrily exposed an Oxford Brookes undergraduate who called for the elderly to stay at home and follow the rules. Publishing the words of one student as if they were the unanimous calls of all those who study at both universities is clearly fishing for a reaction. It doesn’t help that the Mail confused Oxford Brookes and Oxford University in their choice of photo in an article about student case numbers. Are we all one and the same?

Their readers seem to think so. In their comments sections and on local community groups, students are being ceaselessly blamed and shamed.

The extent of the animosity felt at the moment towards students is perhaps best shown by the Facebook reactions to two mail stories, the aforementioned Oxford Mail article about the Brookes undergraduate, and their coverage of an anti-lockdown protest. The protest article received seven comments and two shares, with the most targeted criticism calling Corbyn’s brother ‘clinically insane’. The other received 69 shares and 560 comments, mostly calling the students’ an attitude that reflects society, selfish. Yet, not many seem to recognise that these are the inflammatory words of one who does not speak for all, with replies blaming and targeting ‘students’ as a wider group. The words of one student were met with more group anger than a literal anti-restrictions protest, which calls for the absolute removal of all the rules the same residents ask so loudly for students to follow.

All this animosity is what results when our response to the pandemic is to pit people against people: the rule-breakers against the rule-abiders, the rule-enforcers against the rule-bound. In reality, almost everyone sits somewhere between each of those extremes, and it hurts communities to box people into labels. That the government’s coronavirus restrictions have been lightly enforced and sometimes open to interpretation should be a mercy to understanding the complex fabrics that underlie our society.

We are in for a long winter. The months ahead look likely to be dotted with more restrictions and uncertainty. It would be a tragedy if, rather than rebuilding our communities, we made the winter even longer.

Therefore, let’s reach out to the sick, the quarantined, and the frightened. Before sharing something on social media, let’s think twice about how it may make the human beings seeing it feel: the more you fuel an ‘us versus them’ rhetoric, the more those who do not fit the box you impose upon them begin to feel pushed within it. Finally, let’s make a special effort to increase our contact with one another — virtually as it may be — and make a conscious effort to bring our communities closer together, not drive them further apart.