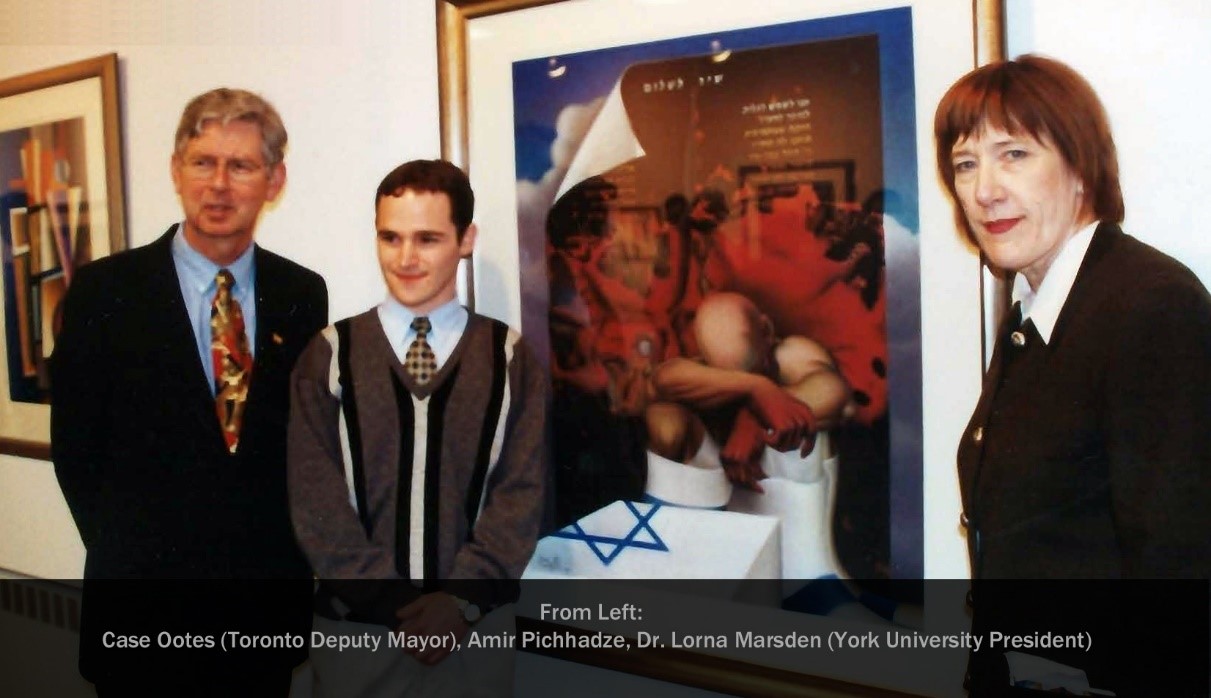 The path towards peace in the Middle East

In 1995, the Israeli Prime Minister Yitzhak Rabin participated in an anti-violence rally that supported the Oslo peace process. At this rally, Rabin was assassinated by Yigal Amir, a far-right law student at Bar-Ilan University who opposed Rabin’s peace initiatives. Subsequently, in May 1996, Benjamin Netanyahu was elected Prime Minister of Israel.

In September 1996, Peace Magazine asked whether peace was still possible. One commentator, Diana Zisserman-Brodsky, asked how far PM Netanyahu would be ready to go to promote peace. Another commentator, Gennady Dertkin, maintained an optimistic perspective: he referred to a painting I created to commemorate the tragedy while inspiring optimism about future peace.

Miriam Chinsky described it as a searing probe into Rabin’s assassination at the hands of a Jewish man—the enemy from within. She explained, “Seen in the aftermath of the murder, a grieving man crouches, head bowed, before Rabin’s flag-draped coffin with a broke Magen David representing unity gone awry. A portion of the flag is wrapped around the man’s legs and covers his feet. His hands are bloodied and behind him is a blood-spattered copy of Shir Lashalom (Song of Peace), which Rabin had at the moment he was killed. An obvious bullet hole is a reminder of the method of assassination.”

“The man is the Jewish People, torn by political and religious strife. He mourns the death, yet the infighting marks him as it does all those who cannot or will not come to peaceful terms with their differences. The song sheet is colored in reverse, white lettering on a black background to accent the darkness of the act and its consequences. But one corner, curled forward, pristine white against the sky, signifies a glimmer of hope.” She goes on to ask whether this is “Pichhadze’s youthful optimism?”

Considering recent developments, is my ‘youthful optimism’, from almost 25 years ago, finally turning into an attainable reality?

Frederick Kemp was certainly not wrong when he said that  “it’s been a safe bet over the last four decades … to ‘short’ the region, as other parts of the world have moved ahead economically, technologically and politically. Not even historic peace deals between Israel and Egypt in 1979 and fifteen years later between Israel and Jordan did much to change that trajectory.”

Yet, on September 15 the world witnessed a breakthrough. The United Arab Emirates (UAE) and Bahrain signed normalization agreements with Israel. Under these agreements “the countries have committed to exchange embassies and ambassadors and to co-operate on a broad array of issues, including education, healthcare, trade and security.”

US President Donald Tramp hailed the occasion as one which “will serve as the foundation for a comprehensive peace across the entire region, something which nobody thought was possible, certainly not in this day and age.” Netanyahu described the day as a “pivot of history, a new dawn of peace.”

What explains this turning point? Allegedly, these agreements have been facilitated by circumventing previous hurdles to peace. For example, as noted by Jeremy Bowen, a BBC Middle East editor, Kemp, Ezzedine C. Fishere, and others, Arab states appear to be breaking away from a long-standing Arab consensus that a precondition for normal relations with Israel must be the resolution of the disputes between Israel and the Palestinians. However, in the agreement’s signing ceremony “both the UAE and Bahraini foreign ministers spoke of the importance of creating a Palestinian state.”

Moreover, Netanyahu allegedly backtracked from his push for annexation of territories of the West Bank. As a result, we have seen greater normalisation of relations in the region. For example, “Emirati Foreign Minister Sheikh Abdullah bin Zayed Al Nahyan, the brother of Abu Dhabi’s powerful crown prince, even thanked Netanyahu for ‘halting the annexation’ of West Bank land claimed by the Palestinians in exchange for Emirati recognition”.

Netanyahu described the day as a “pivot of history, a new dawn of peace.”

That said, Netanyahu “has insisted that Israel has only temporarily suspended its plans to annex West Bank settlements.” This may provide an answer to that first question posed in the Peace Magazine in 1996: how far would PM Netanyahu go to promote peace?

These deals may have also been facilitated by a more piecemeal approach to normalization of ties. Some prior steps towards this normalization include: the attendance of an Israeli official at a security conference in Bahrain; the attendance of Jerusalem’s Chief Rabbi in Bahrain at an interfaith event (Dec 2019); and meetings between the Foreign Minister of Bahrain and his Israeli counterpart in the US (July 2019); and Saudi Arabia opening up its air space for commercial flights to and from Israel.

Allegedly, these agreements were also driven by shared interests and concerns between Israel, some of its neighbouring countries, and other countries like the US. The agreements helped such countries to facilitate economic and trade interests such as arm’s sales, concern about the changing influence and activities of different players such as Iran and Turkey, and the need to fight terrorism.

These agreements may also reflect the changing attitudes of today’s younger generation. As Kempe opined based on his recent trips to the Middle East, “particularly among the young” there is “frustration with the status quo, a hunger for a better future and an impatience for change.”

As could be expected, there have been mixed reactions to these developments.

Some countries have also strongly condemned these agreements. For example, Turkey has similarly condemned the agreement and is even considering suspending diplomatic ties with the UAE. Iran also condemned the deal and described it as a stab in the back to all Muslims.

“Particularly among the young” there is “frustration with the status quo, a hunger for a better future and an impatience for change.”

Some countries had a more cautious reaction. In Pakistan, for example, while there have been public demonstrations against the agreements, the Ministry of Foreign Affairs expressed cautious optimism depending on “how Palestinians’ rights and aspirations are upheld and how regional peace, security and stability are preserved.”

Similarly, in Saudi Arabia, Prince Faisal bin Farhan has cautiously welcomed the agreement as positive, but maintained that it will not normalize relations with Israel until peace is signed with the Palestinians. He suggests that the Arab Peace Plan “is the best way forward to a settlement of the conflict and to normalization with Israel with all states.” This same need to achieve peace between Israel and the Palestinians was also emphasized by Jordan and Oman.

On the other hand, some countries have reacted optimistically. For example, Britain’s Foreign Secretary Dominic Raab stated that he warmly welcomes “this important agreement normalising relations between Bahrain and Israel.” He stated that “full diplomatic relations between two of the UK’s friends is excellent news.”

Australia’s Foreign Minister Marise Payne commented that “Australia welcomes the historic announcement of the normalisation of relations between Israel & Bahrain. It is a courageous step forward for peace & security in the Middle East.” Canada’s foreign Minister François-Philippe Champagne commented that “this is a positive step toward enhancing Middle East peace, stability and security.”

Closer to home, Egypt’s president Abdel Fattah El-Sisi said “he appreciates the ‘important step’ of Israel and Bahrain establishing diplomatic relations. The agreement would help establish “stability and peace in the Middle East, in a way that achieves a just and permanent settlement of the Palestinian issue,”” Some other countries that expressed support for the agreement include Brazil, Croatia, Cyprus, Estonia, Germany, Greece, Kosovo, Latvia, and Romania. The EU has also expressed its support.

However, some commentators have downplayed the significance of these agreements. For example, Andrea Mitchel, NBC News’ chief foreign affairs correspondent, cautioned that “while today’s agreements open the doors for trade, travel, and tourism […] it is not Middle East peace!”

Some even suggest that these agreements are actually a big step in the wrong direction. Ezzedine C. Fishere expressed concern that the agreements do not resolve any of the conflicts in the Middle East. He even suggested they may facilitate existing conflicts by opening “the door for Israel to become a fuller partner in the Arab Gulf fight against Iran and sometimes Turkey.”

“The prospects for regional peace in the Middle East will have taken a giant leap forward.”

On the other hand, some commentators have praised the agreements. Hugh Hewitt opines that “the prospects for regional peace in the Middle East will have taken a giant leap forward”. Even some commentators who frequently criticize Trump, such as New York Times columnist Thomas Friedman, have acknowledged that the agreement was a “geopolitical earthquake” and, as Trump described it, a “HUGE breakthrough”.

What future measures could facilitate greater peace in the region? One commentator, Kempe, suggests expanding the number of agreements between Israel and other countries in the region. The good news is that new Israel-Arab peace deals could be expected in the near future and “other Arab countries believed to be close to recognizing Israel include Oman, Sudan and Morocco.”

Others, like Raheel Raza, a journalist and president of the Council for Muslims Facing Tomorrow, have called on other Muslim countries outside of the Middle East, like Pakistan, to recognize Israel too.

Kempe suggests these agreements could “eventually spawn rules-based institutions that could become the regional equivalents of the European Union, NATO and an CSCE-like reconciliation process through which they settle economic, political and human rights differences.” That would certainly be a real victory for those who, like me, would love to see peace in the region.

We may witness in the coming future the emergence of what the UAE minister of state for foreign affairs described as a ‘warm peace’. This sort of peace is not based on the need to end hostilities (as in the Israel-Egypt peace agreement) but on mutual interests. Constructive collaboration such as “sharing technology, generating investment, closing business deals and exchanging intelligence to more effectively counter threats from Iran and other potential spoilers” are big incentives.

Ultimately, the sustainability of this recent push towards normalization and broader comprehensive peace may depend on some form of resolution to the existing conflict between Israel and Palestinians.

So is peace an attainable reality, or just a figment of the youthful optimist’s imagination? The reality is that we don’t know—it remains to be seen to what extent, if at all, these developments will pave the way towards comprehensive regional peace as well as the formation of transnational and international forms of cooperation.

Last month’s agreements show “just how hungry for peace we all are in this world.”

The outcome will depend on an array of factors. But as we wait, I will hold on to my ‘youthful optimism’ about peace. I will continue to call on all parties to be guided and inspired by the lyrics of the Israeli song of peace. As these lyrics caution, “he whose candle was snuffed out and was buried in the dust, bitter crying won’t wake him up, and won’t bring him back. Nobody will bring us back from a dead and darkened pit here, neither the victory cheer nor songs of praise will help.”

Therefore, the song calls on us not to merely “whisper a prayer,” but instead to “sing a song for peace, in a loud shout.” “Don’t say the day will come,” but rather “bring on that day because it is not a dream – and in all the city squares cheer only for peace!” The recent developments appear to reflect and support this sentiment and ambition. Last month’s agreements show “just how hungry for peace we all are in this world.”